View source
Not to be confused with King's Own Royal Border Regiment.

The King's Own Scottish Borderers was a line infantry regiment of the British Army, part of the Scottish Division. On 28 March 2006 the regiment was amalgamated with the Royal Scots, the Royal Highland Fusiliers (Princess Margaret's Own Glasgow and Ayrshire Regiment), the Black Watch (Royal Highland Regiment), the Highlanders (Seaforth, Gordons and Camerons) and the Argyll and Sutherland Highlanders to form the Royal Regiment of Scotland, becoming the 1st Battalion of the new regiment.

The regiment was raised on 18 March 1689 by David Melville, 3rd Earl of Leven to defend Edinburgh against the Jacobite forces of James VII. It's claimed that 800 men were recruited within the space of two hours. The regiment's first action was at the Battle of Killiecrankie on 27 July 1689. Although this battle was a defeat for the Williamite army, the Jacobite commander, John Graham, 1st Viscount Dundee (Bonnie Dundee), was killed by a volley fired by Leven's Regiment, bringing an end to James II's attempt to save his throne in Scotland. The regiment was judged to have performed well and was granted the privilege of recruiting by beat of drum in the City of Edinburgh without prior permission of the provost.[1]

The regiment was awarded the right to bear the emblem of the Sphinx for their role in the Battle of Alexandria in 1801. Its recruiting area was moved to the Scottish Borders region in 1805 from when the regiment became known as the 25th (the King's Own Borderers) Regiment of Foot.[2]

The regiment was not fundamentally affected by the Cardwell Reforms of the 1870s, which gave it a depot at Fulford Barracks in York from 1873, or by the Childers reforms of 1881 – as it already possessed two battalions, there was no need for it to amalgamate with another regiment.[3] The regiment moved to Berwick Barracks in July 1881. Under the reforms the regiment became The King's Own Borderers on 1 July 1881.[4] A 3rd, Militia, Battalion was formed as the Scottish Borderers Militia, with headquarters at Dumfries. The regiment became The King's Own Scottish Borderers in 1887.[2]

During the Second Anglo-Afghan War in 1878 to 1880, the regiment formed part of the 2nd division which was renamed the Khyber Line Force while guarding the lines of communication between Kabul and Peshawar.[5] The 3rd (Militia) battalion was embodied in January 1900 for service in the Second Boer War, and 998 officers and men embarked for South Africa on the SS Kildon Castle two months later.[6] Most of the battalion returned home in June 1902.[7]

In 1908, the Volunteers and Militia were reorganised nationally, with the former becoming the Territorial Force and the latter the Special Reserve;[8] the regiment now had one Reserve and two Territorial battalions.[2][9]

The Bachelor's Walk massacre happened in Dublin, on 26 July 1914, when a column of troops of the King's Own Scottish Borderers were accosted by a crowd on Bachelor's Walk. The troops attacked "hostile but unarmed" protesters with rifle fire and bayonets - resulting in the deaths of four civilians and injuries to in excess of 30 more.[10][11]

The 1/4th (Border) Battalion and the 1/5th (Dumfries & Galloway) Battalion landed in Gallipoli as part of the 155th Brigade in the 52nd (Lowland) Division in June 1915. After being evacuated from Gallipoli in January 1916 they moved to Egypt and then took part in the Third Battle of Gaza in November 1917[13] before landing at Marseille in April 1918 for service on the Western Front.[12]

In the period between the wars, the regiment's regular battalions were sent all over the British Empire to Ireland, Egypt and Hong Kong but were quickly recalled home at the outbreak of the Second World War in September 1939.[13]

The 1st Battalion landed in France as part of the 9th Brigade in the 3rd Infantry Division in September 1939 for service with the British Expeditionary Force (BEF); it took part in the Dunkirk evacuation in June 1940 and the Normandy landings in June 1944 and saw action at the Battle for Caen later that month.[13]

The 2nd Battalion land in Burma as part of the 89th Brigade in the 7th (Indian) Division in September 1943 for service in the Burma Campaign and saw action at the Battle of the Admin Box in February 1944 and the Battle of Imphal in July 1944.[13]

The 4th and 5th Battalions landed at Saint-Malo as part of the 155th Brigade in the 52nd (Lowland) Division in June 1940 for service with the British Expeditionary Force; after evacuation from Cherbourg later in the month they took part in Operation Infatuate in November 1944 and the subsequent capture of Bremen in April 1945.[13]

The 6th Battalion took part in the Normandy landings as part of the 44th Brigade in the 15th (Scottish) Division in June 1944 and saw action at the Battle for Caen later that month and then advanced into Germany.[13]

One of its heaviest losses during the war was at the ill-fated Battle of Arnhem in which the 7th Battalion, as part of the 1st Airlanding Brigade of 1st Airborne Division, suffered 90% casualties in September 1944;[16] they defended the perimeter in Oosterbeek against 2nd SS Panzer Corps.[13]

After the Second World War, the regiment served internal security duties in the British Mandate of Palestine and was reduced to a single battalion around 1948. The regiment was part of the United Nations forces that saw action at the First Battle of Maryang San in October 1951 during the Korean War.[17] Private Bill Speakman was awarded the Victoria Cross for his actions during the battle.[18] The regiment was deployed during the Malayan Emergency in the late 1950s and was regularly posted to Northern Ireland as part of Operation Banner during the Troubles and suffered casualties during the 1989 Derryard attack which killed two of their men.[19] They took part in the Gulf War in 1991 but were one of the few Scottish regiments not deployed to the Yugoslav Wars: they were being mainly stationed in Northern Ireland instead.[20] The regiment also served in Iraq on Operation Telic in 2003.[13]

Restructuring of the infantry

Until 2004 the regiment was one of five in the line infantry never to have been amalgamated, the others being The Royal Scots, The Green Howards, The Cheshire Regiment and The Royal Welch Fusiliers. When five Scottish regiments were amalgamated to form the Royal Regiment of Scotland on 28 March 2006, the Royal Scots Battalion and the King's Own Scottish Borderers Battalion initially maintained their identities as separate battalions.[21]

The King's Own Scottish Borderers Regimental Museum is located in Berwick Barracks, Berwick-upon-Tweed. Exhibits include uniforms, badges, medals, weapons and relics from different campaigns. Berwick Barracks is operated by English Heritage. Admission includes access to the King's Own Scottish Borderers Museum, Berwick Gymnasium Art Gallery, the Berwick Museum and Art Gallery and the exhibition 'By Beat of Drum' on the life of the British infantryman.[24]

The battle honours are:[2]

Colonels of the Regiment

Colonels of the Regiment were:[2]

Earl of Leven's, or Edinburgh, Regiment of Foot

The 1st Battalion's team was a member of the Irish Football League for one season, 1903–04, while the battalion was stationed at the Victoria Barracks, Belfast.[25] 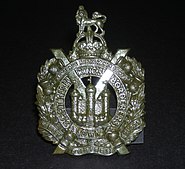