Military Wiki
Register
Don't have an account?
Sign In
Advertisement
in: Articles incorporating text from Wikipedia, History of Uzbekistan, History of Turkmenistan,
and 4 more

By the Russo–Khivan War of 1873 Russia gained control over the Khanate of Khiva. By 1868, during the Russian conquest of Turkestan, Russia had captured Tashkent and Samarkand and gained control over Khanate of Kokand in the eastern mountains and the Khanate of Bukhara along the Oxus. This left an approximately triangular area east of the Caspian, south of the Oxus (Amu Darya) and north of the Persian border. At the north of this triangle was the Khanate of Khiva. Russia had tried twice before. In 1717 Prince Bekovitch-Cherkassky marched from the Caspian and defeated the Khivan army. The Khivans lulled him by diplomacy and then slaughtered his entire army. In the Khivan campaign of 1839 Pervosky marched south from Orenburg. The winter was unusually cold, most of his camels died and he was forced to turn back. 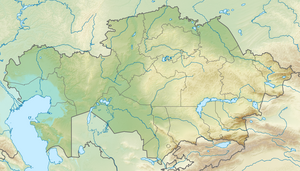 A decision to attack Khiva was made in March 1870. The problem was that Khiva was an oasis surrounded by several hundred miles of desert. This desert had to be mapped and waterholes found before armies could move. In 1869 Radetzsky founded Krasnovodsk which later became the headquarters of the Trans-Caspian Military District and the start of the Trans-Caspian Railway. Skobelev mapped a route from Krasnovodsk to the edge of the oasis and Markozov later explored the area more thoroughly. Lomakin explored the Mangyshlak Peninsula. In September 1872 Markozov started from Krasnovodsk and Chikishlyar. He planned to make a dash to Khiva but was called back by the Viceroy of the Caucasus. In the east Kaufmann sent parties into the desert south of the Syr-Darya.

In December 1872 the Czar made the final decision to attack Khiva. The force would be 61 infantry companies, 26 of Cossack cavalry, 54 guns, 4 mortars and 5 rocket detachments. Khiva would be approached from five directions. (1) General von Kaufmann, in supreme command, would march west from Tashkent and meet a second force moving south from (2) Fort Aralsk. The two would meet in the middle of the Kyzylkum Desert at Min Bulak and move southwest to the head of the Oxus delta. Meanwhile, (3) Veryovkin would go south from Orenburg along the west side of the Aral Sea and meet (4) Lomakin coming directly east from the Caspian while (5) Markozov would march northeast from Krasnovodsk, later changed to Chikishlyar. The reason for this odd plan may have been bureaucratic rivalry. The governor of Orenburg had always had primary responsibility for Central Asia. Kaufmann's newly conquered Turkestan Province had many active officers while the Viceroy of the Caucasus had by far the most troops.

The two eastern armies: The Aralsk force started on 11 March 1873 and Kaufmann started from Jizzakh on 23 March. On April 13 Kaufmann issued new orders. Both forces would turn southwest, meet at Khala-Ata about 130 miles east of the head of the delta, and march west to the Oxus. The new route had not been mapped, a dangerous thing in the desert. The two forces met at Khala-ata on May 6, spent time resting and digging wells and moved out on May 12. On May 17 they moved out with what they thought was a 3-day supply of water, but by nightfall the water was gone. A Kazakh found a small waterhole a few miles north and the camels were sent back to bring a new load of water. By this time so many camels were weak or dying that they had to abandon most of their supplies. They reached the Oxus at Uch-Uchak on May 23. They silenced a Khivan battery at Sheik-Arik and spent three days crossing the river unopposed. Now on the populated side, Kaufmann announced that he would pay for any supplies, which he did, but if supplies did not appear he would take them by force. On June 4 he occupied the abandoned fort of Hazarasp and received a letter from the Khan offering terms and another message from Veryovkin who had just taken Kungard. The campaign was now almost over except for the problem of the western armies. (Uch-Uchak is on the Oxus about 30 miles southeast of the start of the delta. Hazarasp is in head of the delta 50 miles northwest of Uch-Uchak. 30 miles west of Hazarasp is Khiva. Kungard is around 140 miles north-northwest of Khiva at the northwest corner of populated part of the delta, north of which there are marshes and then Lake Aral.)

Veryovkin was at the northwest corner of the delta and Kaufmann at the south corner, but it was not until June 4 and 5 that messengers brought them into contact. Veryovkin took command of Lomakin's troops and left Kungard on May 27, taking Khojali (55 miles south) and Mangit (35 miles southeast of that). Because of some firing from the village, Mangit was burned and the inhabitants slaughtered. The Khivans made a number of attempts to stop them. By June 7 he was on the outskirts of Khiva. Two days before he had learned that Kaufmann had crossed the Oxus. On June 9 an advanced party came under heavy fire and found that they had unwittingly reached the North Gate. They took a barricade and called for scaling ladders, but Veryovkin called them back, intending only a bombardment. During the engagement Veryovkin was wounded in the right eye. The bombardment began and an envoy arrived at 4 PM offering capitulation. Because firing from the walls did not stop the bombardment was resumed and soon parts of the city were on fire. Bombardment stopped again at 11PM when a message arrived from Kaufmann saying that the Khan had surrendered. The next day some Turkmen began firing from the walls, the artillery opened up and a few lucky shots smashed the gate. Skobelev and 1000 men rushed through and were near the Khan’s place when they learned that Kaufmann was peacefully entering through the West Gate. He pulled back and waited for Kaufmann.

The Khan, who had fled Veryovkin’s bombardment, was called back and reinstated on June 14. On August 24, after messages were exchanged with St Petersburg, a treaty was signed. The Khan renounced diplomatic or military operations without Russian consent, abolished slavery, opened the Khanate to Russian merchants and the Oxus to Russian boats and agreed to an indemnity of 2,200,000 rubles which would be paid in installments until 1893. The Russians placed a garrison at Petroalexandrovsk east of Khiva. In October a strip of Khivan territory was given to Bokhara as a reward for the Amir’s neutrality. In March 1874 a Trans-Caspian military district was created with its headquarters at Krasnovodsk. Khiva remained a Russian protectorate until the revolution.

The Yomud campaign: While negotiating with the Khan, Kaufmann attacked the Yomud Turkomans who lived on the southwest side of the oasis. According to MacGahan,[4] Kaufmann demanded an impossibly large tax and when the Yomuds fled he sent soldiers after them with a great deal of unnecessary slaughter. After the Yomuds were ruined other Turkoman tribes agreed to a similar large tribute.