Kabuto (兜, 冑) is a type of helmet first used by ancient Japanese warriors, and in later periods, they became an important part of the traditional Japanese armour worn by the samurai class and their retainers in feudal Japan.

Japanese helmets dating from the fifth century (long before the rise of the samurai class) have been found in excavated tombs. Called mabizashi-tsuke kabuto (visor-attached helmet), the style of these ancient helmets came from China and Korea and they had a pronounced central ridge.[1][2]

The kabuto was an important part of the equipment of the samurai, and played a symbolic role as well, which may explain the Japanese expressions, sayings and codes related to them. One example is Katte kabuto no o o shimeyo (lit. "Tighten the string of the kabuto after winning the war"). This means don't lower your efforts after succeeding (compare to "not to rest on one's laurels").[citation needed] Also, kabuto o nugu (lit. "to take off the kabuto") means to surrender.[citation needed]

Parts of the kabuto[]

The basic parts of the kabuto include:

A typical kabuto features a central dome constructed of anywhere from three to over a hundred metal plates riveted together. These were usually arranged vertically, radiating from a small opening in the top. The rivets securing these metal plates to each other could be raised (a form known as hoshi-bachi) or hammered flat (a form known as suji-bachi); another form, called hari bachi, had the rivets filed flush. Some of the finer hachi were signed by their makers, usually from one of several known families, such as the Myochin, Saotome, Haruta, Unkai, or Nagasone families.[citation needed]

A small opening in the top of the kabuto, called the tehen or hachimanza (seat of the war god, Hachiman), was thought[according to whom?] to be for passing the warrior's top knot through. Although this practice was largely abandoned after the Muromachi period, this opening may have been retained for purposes of ventilation or simply as an artifact of how the plates were riveted together.[3] The tehen was usually decorated with tehen kanamono, which were rings of intricately worked, soft metal bands often resembling a chrysanthemum.[3][4] Zunari kabuto and momonari kabuto were two helmet forms that did not usually have an opening at the top.

Kabuto incorporated a suspended neck guard called a shikoro, usually composed of three to seven semicircular, lacquered metal or oxhide lames, attached and articulated by silk or leather lacing, although some shikoro were composed of 100 or more small metal scales in a row.[5] This lamellar armour style, along with kusari (mail armour), was the standard technology of Japanese body armour, and some shikoro were made of mail sewn to a cloth lining (a form called kusari shikoro).

The kabuto was secured to the head by a chin cord called shinobi-no-o, which would usually be tied to posts or hooks on the mengu (facial armour) or simply tied under the chin.

Kabuto are often adorned with crests called datemono or tatemono;[6] the four types of decorations were the maedate (frontal decoration), wakidate (side decorations), kashiradate (top decoration), and ushirodate (rear decoration). These can be family crests (mon), or flat or sculptural objects representing animals, mythical entities, prayers or other symbols. Horns are particularly common, and many kabuto incorporate kuwagata, stylized deer horns.

Many wavy shaped hagi-no-ita plates form a hachi. A colourful tehen kanamono can be seen at the top.

Kasa jirushi no kan, a ring for securing a kasa jirushi (helmet flag) to the hachi

The fukigaeshi can be seen to both sides of the mabizashi (brim), and the shinobi-no-o (cord) secures the mengu (facial armour).

Suji bachi is a multiple-plate type of Japanese helmet with raised ridges or ribs showing where the helmet plates come together; the rivets may be filed flat or they may be left showing, as in the hoshi-bachi kabuto.

Hoshi-bachi (star helmet bowl) kabuto with protruding rivet heads, have large rivets (o-boshi), small rivets (ko-boshi) and a rivet with a chrysantemoid-shaped washer at its base (za-boshi). Hoshi-bachi kabuto could also be suji bachi kabuto if there were raised ribs or ridges showing where the helmet plates came together.

Hari bachi is multiple-plate Japanese hachi with no ribs or ridges showing where the helmet plates come and the rivets are filed flush.

The zunari kabuto is a simple, five-plate design.

A great number of simpler, lightweight, folding, portable armours for lower-ranking samurai and foot soldiers (ashigaru) were also produced. These were called tatami armour, and some featured collapsible tatami kabuto (also called choshin-kabuto), made from articulated lames.[4][7][8] Tatami kabuto did not use rivets in their construction; instead, lacing or chain mail was used to connect the pieces to each other.

Kaji kabuto were a type of helmet worn by samurai firemen.[citation needed]

Jingasa were conical war hats, worn by ashigaru (foot soldiers) and samurai, which could be made from leather or metal.[9]

During the Momoyama period of intense civil warfare, kabuto were made to a simpler design of three or four plates, lacking many of the ornamental features of earlier helmets. To offset the plain, utilitarian form of the new helmet, and to provide visibility and presence on the battlefield, armorers began to build fantastic shapes on top of the simple helmets in harikake (papier-mâché mixed with lacquer over a wooden armature), though some were constructed entirely of iron. These shapes mimicked forms from Japanese culture and mythology, including fish, cow horns, the head of the god of longevity, bolts of silk, head scarves, Ichi-no-Tani canyon, and axe heads, among many others. Some forms were realistically rendered, while others took on a very futuristic, modernist feel. 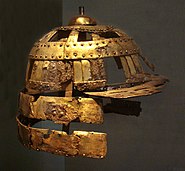 A Kofun period (fifth century) early kabuto made of iron and gilt copper, from Ise Province

Za-boshi kabuto (chrysantemoid-shaped washer at the base of the rivet), this is also a suji bachi kabuto, as it has raised ridges.