The KPV-14.5 heavy machine gun (KPV is an initialism for Krupnokaliberniy Pulemyot Vladimirova, in Russian as Крупнокалиберный Пулемёт Владимирова, or КПВ) is a Soviet designed 14.5×114mm-caliber heavy machine gun, which first entered service as an infantry weapon (designated PKP) in 1949. In the 1960s the infantry version was taken out of production because it was too big and heavy. It was later redesigned for anti-aircraft use, because it showed excellent results as an AA gun, with a range of 3,000 meters horizontally and 2,000 meters vertically against low flying planes.[1] It was used in the ZPU series of anti-aircraft guns. Its size and power also made it a useful light anti-armour weapon on the BTR series of vehicles and the BRDM-2 scout car.

The version for use in armoured vehicles is called the KPVT (tankoviy, 'tank'). KPVT is used for armoured vehicle installations, boats, movable and stationary mounts and various antiaircraft mounts. It features a shorter receiver and a heavier barrel jacket. The KPVT also uses a 50-round belt instead of the original 40-round belt. KPVTs are the primary armament of the wheeled BTR-60PB/70/80 series armoured personnel carriers and BRDM-2 armoured reconnaissance vehicles. It is intended for fighting against light armoured targets, weapons systems and light shelters at the distances of up to 3000 m, as well as air targets at distances up to 2000 m.

The naval version was called the marine tumbovaya (MTPU). It was mounted in the following turrets; 2M-5 was for torpedo boats, the 2M-6 for patrol boats, and the 2M-7 for trawlers.

In 1964, amongst other small craft combatants, the North Vietnamese Navy had 12 P4 Motor Torpedo Boats in their inventory. On 2 August 1964, three P4s belonging to NVN Torpedo Boat Squadron 135[2] attacked the US destroyer USS Maddox in the Tonkin Gulf. The Maddox fired over 280 5 inch (127mm) shells at the charging boats, thus preventing them from discharging their 550 lb TNT armed torpedoes within the necessary 1,000 yard effective range.[3] All six torpedoes missed. However, as the torpedo boats were moving at nearly 52 knots (96 km/h), they commenced to duel the destroyer with their 14.5mm heavy machineguns, scoring only one hit on the US warship in the process. At the time of the "Tonkin Gulf Incident", US identification manuals described the P4 as being equipped with 25mm guns, thus identifying the spent projectile (as well as in after action reports) as 25mm instead of the actual 14.5mm caliber bullet.

As the duel between the destroyer and torpedo boats ended, and each departed in opposite directions, 4 F8 Crusaders from the aircraft carrier USS Ticonderoga attacked the retreating boats. The Crusaders fired Zuni rockets and 20mm cannons, while the 3 boats replied with their 14.5mm machineguns. The jets reported leaving one boat in sinking condition (it limped back to base), and one F8 was heavily damaged, which was reported as shot down by the NVN, but in fact also limped back to its carrier.[4]

The 14.5mm marine pedestal machine gun mount (14.5mm MTPU) is intended for combat against armoured surface, coast and air targets. It is mounted on decks of boats and can defeat surface and coast targets with a range of 3,000 meters horizontally and 2,000 meters vertically against low flying planes.[5]

The development of the machine gun began in 1944. The 14.5×114mm M41 cartridge can be used with High Explosive Incendiary - Tracer (HEI-T) or Armour-Piercing Incendiary (API) bullets, and they have approximately twice the energy of a 12.7 mm (.50 BMG) projectile. The KPV is air-cooled and fitted with barrel with a hard chrome plated bore. It uses a short recoil operation system with gas assistance and a rotary bolt. It can be fed with the 40-round metallic belt from either the left or right side. The barrel can be removed by turning the prominent latch on the forward end of the receiver and pulling on the barrel's carrying handle.

The ZPU is a towed anti-aircraft gun based on the KPV. It entered service with the Soviet Union in 1949 and is used by over 50 countries worldwide. 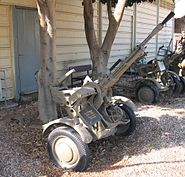