White received an English education in both the local public schools and at his father's residence in Romney.[3][4] White further supplemented his education with "broadened courses of reading and private study."[4] Beginning at the age of 13, White attended school from 9 a.m. until 4 p.m. and worked on his family's farm before and after school, and during his holidays.[3] At the age of 16, White left his schooling to work on the farm and in his father's county court clerk office, while studying privately at home.[3][5]

White departed his home in Romney for Charleston, West Virginia, where he was entirely dependent upon himself and his own resources.[3] There, White commenced his career in public service in 1886, when he began serving as a messenger in the office of West Virginia Secretary of State Henry S. Walker.[3][4][5] He received successive promotions within the Secretary of State's office beginning with clerk, then to stationery clerk, and finally to chief clerk of the office during the latter part of Walker's term in office.[3] White was retained as the chief clerk of the office by Walker's successor, William A. Ohley.[3] White was affiliated with the Secretary of State's office for seven years.[5] He continued to fulfill that position until March 8, 1893[3][4][5] when he was appointed to serve as the private secretary to West Virginia Governor William A. MacCorkle.[4][5][7] As a representative of Governor MacCorkle in his capacity as secretary, White traveled across the state to high profile events, such as the June 1895 strikes at the Crozier Works on Elkhorn Creek in McDowell County, to urge calm and to provide the governor with situational awareness.[8] White performed as Governor MacCorkle's private secretary for four years until the end of his administration's term in 1897.[5][9]

During the West Virginia general elections of 1892 and 1896, White was recognized for his leadership efforts in support of the campaigns of Democratic candidates.[10]

While he was employed at the West Virginia State Capitol, White began studying jurisprudence with legal coursebooks.[9] He also undertook his study of jurisprudence in the law firm of Chilton, MacCorkle and Chilton in Charleston.[5] White was admitted to the bar in 1897[5][9] and afterward, he established a law practice in Charleston.[9] White's practice began arguing cases in county, state, and Federal level courts within West Virginia.[9] On December 19, 1901, the West Virginia Secretary of State office issued a charter authorizing 100,000 US$ in capital stock for the incorporation of Midland Railway, of which White was a corporator with one subscribed share of 100 USD.[11]

At the onset of the Spanish–American War and shortly after his admission to the bar in 1898,[5] White again volunteered for service with the West Virginia National Guard and served throughout the duration of the war.[5][9] He received his commission from West Virginia Governor George W. Atkinson as Captain in command of Company B of the 1st West Virginia Infantry Regiment in the United States Volunteers.[5][9] During his service in the Spanish–American War, White received a promotion to the rank of Major.[5][9] After a year of serving with his regiment in the war, White received an honorable discharge and vacated the West Virginia National Guard following ten years of service in the guard as a military officer.[5][9] According to Governor Atkinson in his Bench and Bar of West Virginia (1919), White "served faithfully and efficiently until the close of the war."[9]

For his service to the Allies in World War I, White was created a Companion of the Distinguished Service Order by George V on behalf of the British Empire.[5][13] Following his relief from active military service in Europe, White embarked upon a global journey that consisted of Egypt, Palestine, India, Burma, the Malay Peninsula, Java, China, Japan, and the Philippines.[5] He returned to the United States in June 1920 and soon thereafter, he resumed his law practice in Charleston.[5]

Following his service in the Spanish–American War, White ran for election as a Democrat and won a seat on the Charleston City Council.[9] White also concurrently fulfilled a four-year term from 1907 to 1911 as a member of the Charleston Board of Affairs while Charleston was organized under a commission form of government.[5][9] While serving on the Board of Affairs, he frequently performed duties as the city's mayor pro tempore.[5][9] Around 1931, White became a member of the West Virginia Board of Control,[7] and was serving as the board's treasurer by 1932.[14] White later served as the board's president for two years.[7] In 1939, Governor Homer A. Holt reappointed White to serve another term on the West Virginia Board of Control ending on June 30, 1941.[15]

On August 22, 1939,[7] White married Mary Ann Williamson near Malvern in Chester County, Pennsylvania.[7] Williamson was a native of Berkeley County, West Virginia,[7] but resided in Athens, West Virginia at the time of her marriage to White.[7] Williamson was a graduate of Shepherd College in Shepherdstown, of Concord College in Athens, and of the University of Kentucky in Lexington.[7] She had been a member of the faculty at Marshall College in Huntington since 1934.[7] 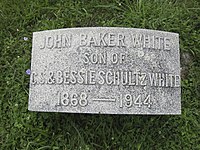 White's service in the Spanish–American War and World War I memorialized on the facade (pictured) of his gravestone.

In his later years, White and his wife resided in St. Petersburg, Florida during the winter season.[13] White died of heart failure on June 2, 1944 at 1 p.m. at the age of 75 at his summer camp near Rupert, Greenbrier County, West Virginia.[2][13][16] The medical certification of White's death stated the cause of his heart failure was due to age and overexertion.[2] White's funeral was held in Charleston,[2] and he was interred in the White family burial plot at Indian Mound Cemetery in Romney.[2][17] At the time of his death, White was residing at 610½ Capitol Street in Charleston.[2]

White was a practicing Mason and Knights Templar affiliated with Royal Arch Masonry and the Thirty-second Degree Ancient and Accepted Scottish Rite of Freemasonry.[5][10] In addition to the Society of the Cincinnati and the Sons of the American Revolution,[4][5] White was also a member of the Military Order of Foreign Wars, United Spanish War Veterans, American Legion, and the Shriners.[5]

White was also an inaugural stockholder and member in the Henry G. Davis Club, named for United States Senator from West Virginia Henry G. Davis, which received its charter on May 31, 1906.[18] The Henry G. Davis Club was founded "for the study of political economy and the science of self-government; for the education of the young men of the State of West Virginia in these sciences and the promulgation of such information, literature and statistics as will in the judgment of its directors be best suited for such purposes."[18] White's cousin Samuel Lightfoot Flournoy, Jr. and his brother Christian Streit White, Jr. were also members of this society.[18] White also served on the Entertainment Committee[19] for the West Virginia Homecoming Week in Point Pleasant which took place October 7–10, 1909 to celebrate the Battle of Point Pleasant and the unveiling of the monument to that battle.[20]

In his Bench and Bar of West Virginia (1919), Atkinson remarked of White's service in Charleston city government: "His chief aim was to render a service that would advance the interests of the people, without showing favors to any class or classes of the citizens of Charleston. His service in that high office marked him as a man of high honor, firmness and probity."[9] Atkinson remarked further of White: "Such men are rarely found in this or any other portion of this wide world which we inhabit."[9]