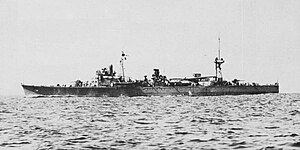 
1 x Type 94 depth charge thrower, 6 x DC rails.Armour: noneAircraft carried: 1x Kawanishi E7K seaplaneAviation facilities: 1 catapult |} Tsugaru (津軽?) was a large minelayer of the Imperial Japanese Navy that was in service during the early stages of World War II. She was named after the earlier Japanese cruiser Tsugaru, which in turn was named after Tsugaru Peninsula in northwest Aomori Prefecture of Japan. She was commissioned immediately before the start of World War II, and sunk by a US submarine in June 1944.

Under the Maru-3 Supplementary Naval Expansion Budget of 1937, a new large minelayer incorporating design improvements realized through operational experience with Japanese minelayer Okinoshima was funded.[1] In addition to carrying 600 Type 6 naval mines, the new ship was equipped with an aircraft catapult, and carried a Kawanishi E7K reconnaissance seaplane. Physically very similar to Okinoshima in size, appearance and layout, its main armament was changed to four 127 mm Type 89 dual purpose guns, intended to give Tsugaru better AA capabilities than its predecessor.[2]

After commissioning, Tsugaru was assigned to Admiral Kiyohide Shima’s Mine Division 19 under Admiral Shigeyoshi Inoue’s IJN 4th Fleet and was forward deployed to Saipan. At the time of the attack on Pearl Harbor in December 1941, Tsugaru was assigned to support the invasion of Guam. Following the success of this mission, in January 1942, Tsugaru deployed from Jaluit together with Okinoshima, under the overall command of Admiral Sadamichi Kajioka to participate in “Operation R” (the invasion of Rabaul and Kavieng).[4] On 5 March, Tsugaru and Okinoshima, under the overall command of Admiral Kuninori Marumo, were assigned to “Operation SR” (the invasion of Lae and Salamaua in New Guinea). On 10 March, the invasion force was attacked by ninety United States Navy aircraft from USS Yorktown (CV-5) and USS Lexington (CV-2) with Tsugaru suffering light damage.

On 14 July, Tsugaru was reassigned to Admiral Gunichi Mikawa’s IJN 8th Fleet, and supported “Operation RI” (the invasion of Buna in New Guinea). Subsequently in August and September, Tsugaru was used on missions to supply reinforcements and equipment to Guadalcanal, and was hit by bombs from USAAF B-17 Flying Fortress bombers on 3 September, with 14 crewmen killed and 30 wounded. After repairs, she continued making transport runs to Guadalcanal, Shortland Island, New Georgia and Santa Isabel Island in the Solomon Islands to the end of February 1943.

From March–May 1943, Tsugaru underwent repairs and refit at Yokosuka Naval Arsenal, returning to Rabaul in early August. However, en route to Rabaul, she was attacked by USS Silversides (SS-236), on 5 August, NNE of Rabaul, with one torpedo hit. The damage was enough to warrant an immediate return to Truk for emergency repairs, and a return to Yokosuka by mid-September, where she remained to the end of the year.

On 1 December 1943, Tsugaru was reassigned to the Third Southern Expeditionary Fleet. On 24 March 1944, she deployed from Palau to mine the Balabac Strait in the Philippines, after which she was stationed at Balikpapan in Borneo. One of the mines from this mission is credited with sinking the USS Robalo (SS-273), in July 1944.[5] On 31 May, Tsugaru was assigned to “Operation KON” (the Relief of Biak), transporting reinforcements from Zamboanga on Mindanao in an effort to counter the American landings. On 21 June, after departing Sorong, New Guinea for Halmahera Island, Tsugaru was torpedoed by the Royal Dutch Navy submarine K-XIV, which caused severe damage. After temporary repairs, she attempted to reach Manila, but was sighted on 29 June near Biak by USS Darter (SS-227), which fired a full spread of six torpedoes. Two hit Tsugaru, which sank at position 2°19′N 127°57′E﻿ / ﻿2.317°N 127.95°E﻿ / 2.317; 127.95 less than 25 minutes later with loss of most of her crew, including her CO, Captain Nakatsu.[6] Tsugaru was removed from the navy list on 10 August 1944.