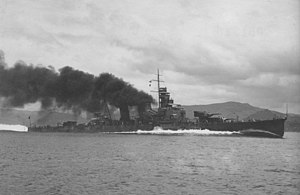 Aoba and her sister ship Kinugasa were originally planned as the third and fourth vessels in the Furutaka-class of heavy cruisers. However, design issues with the Furutaka-class resulted in modifications to include double turrets and an aircraft catapult. These modifications created yet more weight to an already top-heavy design, causing stability problems. Nevertheless, Aoba played an important role in World War II.

Aoba was completed at Mitsubishi shipyards at Nagasaki on September 20, 1927 and was assigned to CruDiv5 until 1933 and thereafter to CruDiv6 and CruDiv7, serving as flagship during much of her career. She was frequently dispatched to patrol the China coast in the late 1920s and the 1930s. Aoba was extensively modernized at Sasebo Navy Yard from 1938–1940, receiving new torpedo tubes, enhanced anti-aircraft guns, improved fire controls and better aircraft facilities. Her bridge was rebuilt and bulges added to her hull in an attempt to compensate for the additional weight and improve stability. After re-commissioning in October 1940, Aoba returned to CruDiv6.

Early stages of the Pacific War

In 1941, Aoba was flagship of Rear Admiral Aritomo Goto as part of the First Fleet under overall command of Vice Admiral Takasu Shiro. CruDiv 6 consisted of Aoba, Kinugasa, Furutaka and Kako. At the time of the attack on Pearl Harbor, CruDiv6 was engaged in the invasion of Guam, following which it participated in the second invasion of Wake Island.

From January through May 1942, Kinugasa was based out of Truk, in the Caroline Islands where it provided protection for the landings of Japanese troops in the Solomon Islands and New Guinea at Rabaul, Kavieng, Buka, Shortland, Kieta, Manus Island, Admiralty Islands and Tulagi.

At the Battle of the Coral Sea, CruDiv 6 departed Shortland and effected a rendezvous at sea with light carrier Shoho. At 1100 on May 7, 1942 north of Taguli Island, Shoho was attacked and sunk by 93 SBD Dauntless dive-bombers and TBD Devastator torpedo-bombers from USS Yorktown and Lexington.

The following day, May 8, 1942 46 SBDs, 21 TBDs and 15 Grumman F4F Wildcats from Yorktown and Lexington damaged Shokaku severely above the waterline and force her retirement. Furutaka and Kinugasa, undamaged in the battle, escorted Shokaku back to Truk. Kako and Aoba continued to cover the withdrawing Port Moresby invasion convoy.

After refueling at Shortland on May 9, Aoba returned to Kure Naval Arsenal on May 22, 1942 for repairs, and returned to Truk on June 23, 1942, and from Truk to Rekata Bay, Santa Isabel Island, where it was assigned patrols through July. In a major reorganization of the Japanese navy on July 14, 1942, Aoba was assigned to the newly created Eighth Fleet under Vice Admiral Mikawa Gunichi and was assigned to patrols around the Solomon Islands, New Britain and New Ireland.

The Battle of Savo Island

On August 7, 1942, an Aichi E13A1 "Jake" from Aoba spotted "one battleship, one auxiliary carrier, four cruisers, seven destroyers and 15 transports" off Lunga Point near Tulagi.

In the Battle of Savo Island on August 9, 1942, CruDiv 6, Chokai, light cruisers Tenryu and Yubari and destroyer Yūnagi engaged the Allied force in a night gun and torpedo action. At about 2300, Chokai, Furutaka, and Kako, all launched their reconnaissance floatplanes. The circling floatplanes dropped flares illuminating the targets and all the Japanese ships opened fire. USS Astoria, Quincy, Vincennes and HMAS Canberra were sunk. USS Chicago was damaged as were the USS Ralph Talbot and USS Patterson. On the Japanese side, Chokai was hit three times; Kinugasa twice, Aoba once, and Furutaka was not damaged. As CruDiv6 retired towards Kavieng, Kako was sunk by USN submarine S-44, but Aoba escaped without further damage. Through the rest of August and September, Aoba and CruDiv6 provided cover to the "Tokyo Express" reinforcement convoys to Guadalcanal.

At the Battle of Cape Esperance on October 11, 1942, CruDiv 6's (Aoba, Furutaka and Kinugasa), and destroyers Fubuki and Hatsuyuki departed Shortland to provide cover for a troop reinforcement convoy by shelling Henderson Field on Guadalcanal. Two American OS2U Kingfisher reconnaissance aircraft spotted the fleet coming down the "Slot" at 30 knots (56 km/h).

So alerted, the radar-equipped American cruisers USS San Francisco, Boise, Salt Lake City, and Helena and five destroyers steamed around the end of Guadalcanal to block the entrance to Savo Sound.

At 2235, the Helena's radar spotted the Japanese fleet, and the Americans successfully cross the Japanese "T". Both fleets opened fire, but Admiral Goto, thinking that he was under friendly-fire, ordered a 180-degree turn that exposed each of his ships to the American broadsides. Furutaka was sunk. Aoba was hit by up to forty 6-inch and 8-inch shells. The bridge was wrecked, the No. 2 turret was knocked out and the No. 3 turret destroyed. Other hits put four of the Aoba’s boilers off line. Admiral Goto was mortally wounded and 80 other crewmen were killed. After temporary repairs and Shortland, Aoba limped back to Truk on October 15, where Admiral Isoroku Yamamoto personally inspected the damage and ordered the ship back to Japan.

Aoba returned to Kure on October 22. During repairs, the wrecked No. 3 turret was covered over with steel plates, and a Type 96 triple-mount 25-mm AA gun installed in its place. Aoba was sent back to Truk on February 24, 1943.

On April 3, while moored at Kavieng, New Ireland, Aoba was bombed by Boeing B-17 Flying Fortresses of the Fifth Air Force's 43rd Bomb Group. A direct hit on Aoba caused two Type 93 Long Lance torpedoes to explode and set the ship on fire while the B-17's strafed the decks with machine guns. Aoba had to be beached to avoid sinking.

After being towed back to Truk, and again to Kure on August 1, Aoba was again repaired and re-fitted. The 8-inch (200 mm) gun was restored to the No. 3 turret and a Type 21 air-search radar and two Type 96 twin-mount 25-mm AA guns were installed. However, Aoba's maximum speed was reduced to 25 knots (46 km/h) due to irreparable engine damage.

Aoba was reassigned to the First Southern Expeditionary Fleet and arrived at Singapore on December 24, 1943. It remained based out of Singapore to the end of February 1944, escorting supply convoys to Burma, the Andaman Islands and along the Malaya coast. On February 25, it was assigned to CruDiv16, with which it participated in the Indian Ocean raid during March 1944. Through April, May and June, Aoba resumed its escort duties through the Dutch East Indies and New Guinea. During a refit at Singapore in July, Aoba gained four triple-mount and 15 single-mount Type 96 25-mm AA guns and a Type 22 surface-search radar.

On October 11, Aoba accidentally collided with Kinu, but the damage was minor. However, on October 23, 1944, Aoba was attacked by the USS Bream. One of six torpedoes hit Aoba in the No. 2 engine room. Aoba limped into Cavite Navy Yard near Manila, but while under emergency repairs the following day and on October 29. it was bombed by carrier based planes from Task Force 38. Repairs still incomplete, Aoba was assigned to a convoy returning to Japan. The convoy was attacked on November 6 off Luzon by USS Guitarro, Bream, Raton and Ray. Altogether the submarines fired 23 torpedoes, two of which hit Kumano, but Aoba escaped without further damage. On arrival at Kure on December 12, Aoba was examined but declared irreparable, and re-rated as a reserve ship. During a US air raid on Kure harbor on April 24, 1945, Aoba was further damaged by bombing, and settled on the shallow bottom of the harbor. Rather than repair the crippled vessel, four additional twin 25-mm AA guns were fitted around the mainmast bringing the total number of 25-mm guns to 50 barrels (5x3, 10x2, 15x1) and Aoba was re-rated as a floating AA battery. On July 24, 1945, about 30 planes from Task Force 38 attacked Kure, and bombed Aoba again. At 2200 hours, Aoba settled to the bottom in 25 feet (7.6 m) of water at 34°14′N 132°30′E﻿ / ﻿34.233°N 132.5°E﻿ / 34.233; 132.5. On July 28, 1945, the hulk was again attacked by ten of Task Force 38's carrier aircraft. Four more direct bomb hits set it on fire, and the fire attracted 7th Air Force B-24 Liberator bombers, which hit it again with four more 500-lb. bombs, breaking off the stern.