Shinshu Maru (神州丸) was a ship of the Japanese Imperial Army during World War II. She was the world's first landing craft carrier ship to be designed as such, and a pioneer of modern-day amphibious assault ships. During some of her operations, she was known to have used at least two cover names, Fuso Maru, and Ryujo Maru.

At least one source claims that the Shinshū Maru was one of the ships sunk by friendly fire at the Battle of Sunda Strait and then salvaged & returned to service.

Shinshu Maru was a significant advance in amphibious warfare, having incorporated numerous innovative features, and as such she was shrouded in a veil of secrecy throughout her existence. She could carry 29 Daihatsu-class landing craft, 25 Shohatsu-class landing craft and 4 armoured gunboats, to be launched from a floodable well deck.

In addition, Shinshu Maru could carry landplanes in a hangar within her superstructure; these aircraft could be launched by catapult to support amphibious assaults, but could not return to the ship, and must (hopefully) land on captured airfields instead.

These concepts pioneered by Shinshu Maru persist to the current day, in the U.S. Navy's LHA and LHD amphibious assault ships.

On 3 January 1945, while returning to Takao after a supply mission to Leyte Island, Shinshu Maru was heavily damaged by a US air attack; after the ship was abandoned she was sunk by the USS Aspro. 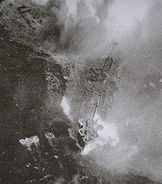 Shinshū Maru on 3 January 1945 off Kaohsiung