James David Watkins (March 7, 1927 – July 26, 2012) was a United States Navy admiral and former Chief of Naval Operations who served as the U.S. Secretary of Energy during the George H. W. Bush administration, also chairing U.S. government commissions on HIV/AIDS and ocean policy. Watkins also served on the boards of various companies and other nongovernmental organizations and as the co-chair of the Joint Ocean Commission Initiative.

Watkins' important positions within the United States Government include:

Watkins was born March 7, 1927, in Alhambra, California. His grandfather George Clinton Ward was president of Southern California Edison during the 1930s. His father, Edward Francis Watkins, owned the Southern California Winery Co. His mother, Louise Watkins, unsuccessfully sought the Republican nomination for Senate in 1938; he described his mother as "a woman ahead of her time."[1]

He attended Webb School of California in Claremont, California; he subsequently graduated from the U.S. Naval Academy in 1949 and received his master's degree in mechanical engineering from the Naval Postgraduate School in 1958.

Admiral Watkins’ ties to oceans as a graduate of the Naval Academy, submariner and former Chief of Naval Operations, have contributed to his commitment to ocean policy reform. When the Oceans Act of 2000 was passed, President George W. Bush established the U.S. Commission on Ocean Policy, and appointed Admiral Watkins to chair the commission. The 16-member commission presented recommendations for a new and comprehensive national ocean policy. Their final report, An Ocean Blueprint for the 21st Century, was released in 2004.

Concurrently, the Pew Charitable Trusts established the Pew Oceans Commission, which was led by President Bill Clinton’s former Chief of Staff Leon Panetta. The 18-member group presented its own recommendations on ocean policy to Congress and the Administration. Their final report, America's Living Oceans: Charting a Course for Sea Change, was released in 2003.

The two reports listed strikingly similar recommendations. As a result, Congress and the Administration began to recognize the importance of ocean policy reform. To further these recommendations, and to act as one unified force, the two commissions came together in 2004 to establish the Joint Ocean Commission Initiative. Admiral Watkins currently co-chairs the Joint Ocean Commission Initiative with Leon Panetta, and is called on as an expert to advise and testify before Congress on ocean governance reform. He is also cited in the media as an expert on ocean issues and has penned a number of opinion pieces calling for ocean reform that were published in national outlets.[3][4][5]

President Reagan appointed Watkins as chairman of his President’s Commission on the HIV Epidemic. The Admiral won the support of many AIDS-awareness advocates when his conservative panel unexpectedly recommended supporting antibias laws to protect HIV-positive people, on-demand treatment for drug addicts, and the speeding of AIDS-related research.[citation needed] 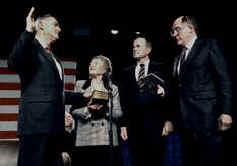 On March 9, 1989, Watkins was sworn in as Secretary of Energy by President George Bush. He remained as Energy Secretary until 1993.

On June 27, 1989, Watkins announced the Ten-Point Plan to strengthen environmental protection and waste management activities at the United States Department of Energy's production, research, and testing facilities. In September 1989, he established the Modernization Review Committee to review the assumptions and recommendations of the 2010 Report. On November 9, 1989, Watkins established the Office of Environmental Restoration and Waste Management within the Department of Energy. On August 15, 1990, Secretary Watkins announced plans to increase oil production and decrease consumption to counter Iraqi-Kuwaiti oil losses caused by the Iraqi Invasion of Kuwait. On March 4, 1991, he transmitted the Administration's energy bill to the House and Senate. On May 10, 1992, in testimony before the Senate Armed Services Committee he reported that, for the first time since 1945, the United States was not building any nuclear weapons.

Admiral Watkins was appointed to what would be the second Presidential commission to be known as the Watkins Commission when named Chairman of the United States Commission on Ocean Policy in 2001.

In March 2001, Watkins was given the title of President Emeritus of the Consortium for Ocean Research and Education (CORE), and was awarded the Navy's Distinguished Public Award by the Secretary of the Navy. On April 21, 2005, the Naval Postgraduate Mechanical Engineering Building was renamed Watkins Hall, after Admiral James D. Watkins. Watkins was also a member of the Naval Postgraduate School (NPS) Hall of Fame.[6]

In 1983, Watkins was inducted as a Knight of Malta. In 1991 he was awarded the AAES Chairs' Award from the American Association of Engineering Societies.[7]