The Kure Naval Base (Japanese: 呉基地, Hepburn: Kure Kichi?), also simply known as the JMSDF Kure Naval Base, is a group of ports and land facilities of the Japan Maritime Self-Defense Force (JMSDF), which are scattered in multiple districts of Kure City, Hiroshima, and where the Kure District Force, etc. are located. There is also a US Army base in Japan United States Army Kure Pier 6 on a part of the base.

On May 1, 1948, it became a member of the 6th Regional Coast Guard Headquarters at the same time as the establishment of the Japan Coast Guard. In July, the Kure Minesweeper Department was set up.

On 1 August 1952, the National Safety Agency Coastal Safety Force was established, and the Kure Route Enlightenment Corps was newly formed under the control of the Yokosuka District Force.

On 16 September 1953, the Kure Route Enlightenment Corps was abolished, and the Kure District Base corps was newly formed under the control of the Yokosuka District Corps.

On July 1, 1954, the National Safety Agency Coastal Safety Force was abolished to make way for the establishment of the Defense Agency Maritime Self-Defense Force. Kure District Force was reorganized. On October 1st, opening of the Kure District General Administration Department.

On May 10, 1957, it was renamed from the Kure Training Corps to the Kure Education Corps.

On July 1, 1987, reorganization of the guards. New edition of Kure Base Service Action.

On March 1, 2005, the Self-Defense Forces Kure Hospital was opened.

Dawn view of Kure Naval Base 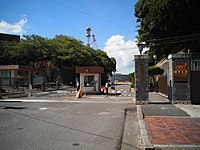 Gate to Kure Naval Base 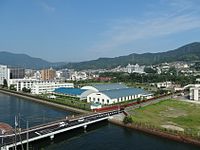 Sōryū-class submarine in Kure Naval Base