The 1909 IGSM was awarded for various minor military campaigns in India, during 1908 to 1935. Each campaign was represented by a clasp on the ribbon; 12 were sanctioned.[2] 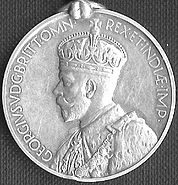 The Medal with the Waziristan 1925 bar was awarded to only 46 officers and 214 men of the Royal Air Force who took part in Pink's War. It is by far the rarest bar given with an India General Service Medal and was only awarded after the then Chief of the Air Staff Sir John Salmond succeeded in overturning the War Office decision not to grant a medal for Pink's War.[3]