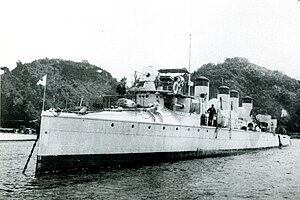 In the First Sino-Japanese War, the Japanese navy came to understand the combat effectiveness of small, fast torpedo-equipped warships over larger, slower ships equipped with slow-loading and often inaccurate naval artillery. The Ikazuchi class vessels were the first destroyers procured by the Imperial Japanese Navy. Four were ordered under the 1896 fiscal year budget, and an additional two under the 1897 budget. All were ordered from the Yarrow Shipbuilders in Poplar, London, which was considered to be the world's premier builders of destroyers and smaller warships.[2]

The design of the Ikazuchi-class destroyers was based on the four-stack “Thirty Knotters” of the Royal Navy (from 1913 grouped as the B-class). All Ikazuchi-class vessels had a flush deck design with a distinctive "turtleback" forecastle that was intended to clear water from the bow during high speed navigation, but was poorly designed for high waves or bad weather. The bridge and forward gun platform were barely raised above the bow, resulting in a wet conning position. More than half of the small hull was occupied by the boilers and the engine room. With fuel and weaponry, there was little space left for crew quarters.

The Ikazuchi-class ships were powered by triple expansion steam engines with coal-fired water-tube boilers. Armament consisted of one QF 12 pounder mounted on a "bandstand" on the forecastle, five QF 6 pounder Hotchkiss (two abreast the conning tower, two between the funnels and one on the quarterdeck) and two single tubes for 18-inch (460 mm) torpedoes.[3]

All six Ikazuchi-class destroyers arrived in Japan in time to be used during the Boxer Rebellion to patrol the China coast and to cover the landings of Japanese ground troops. Niji was lost in an accident off the Shantung Peninsula on 3 August 1900, but the remaining five vessels saw combat service during the Russo-Japanese War of 1904–1905.[4]

After the end of the Russo-Japanese War, Inazuma was lost in a collision with a merchant vessel off the coast of Hakodate, Hokkaidō on 16 December 1909. On 28 August 1912 the remaining four Ikazuchi-class vessels were re-classified as third-class destroyers, and were removed from front-line combat service.

Akebono and Oboro returned to combat service in World War I as part of the Japanese detachment in the Battle of Tsingtao, and in the operation to seize German colonial possessions in the South Pacific. However, their remaining time on the navy list proved to be limited. After the lead ship Ikazuchi was suffered from a boiler explosion at Ominato harbor due to metal fatigue in its engine on 9 October 1912, and was written off the following year. Sazanami was also retired from service. Oboro and Akebono were retained until 1 April 1921, when they were converted into auxiliary minesweepers for a brief period, but were scrapped in 1925.