Military Wiki
Register
Don't have an account?
Sign In
Advertisement
in: Articles with hCards, Articles using infobox person, All articles with unsourced statements,
and 27 more

Hugh O'Brian (born Hugh Charles Krampe; April 19, 1925 – September 5, 2016) was an American actor and humanitarian, best known for his starring roles in the ABC western television series The Life and Legend of Wyatt Earp (1955–1961) and the NBC action television series Search (1972–1973), as well as films including the Agatha Christie adaptation Ten Little Indians (1965); he also had a notable supporting role in John Wayne's last film, The Shootist (1976). He was highly regarded for creating the Hugh O'Brian Youth Leadership Foundation, a non-profit youth leadership development program for high school scholars which has sponsored over 400,000 students since he founded the program in 1958 following an extended visit with Nobel Peace Prize-winning theologian and physician Albert Schweitzer.

O'Brian was born Hugh Charles Krampe in Rochester, New York, the son of Hugh John Krampe, a United States Marine Corps officer and executive at the Armstrong Cork Company, and Edith Lillian (née Marks) Krampe. His paternal grandparents were German immigrants; his mother was half German-Jewish and half English and Scottish ancestry.[citation needed]

O'Brian moved to Lancaster, Pennsylvania, with his parents around 1930 when he was approximately five-years old.[1] His father was an executive with the Armstrong Cork Company, which was headquartered in the Pennsylvania city.[1] The Krampe family first lived at the Stevens House Hotel before moving to the newly developed School Lane Hills houses on the city's West End.[1] O'Brian attended Lancaster city elementary schools.[1] The Krampes resided in Lancaster for about four years before they moved to Chicago, where his father took another position with Armstrong Cork Company.[1] Years later, Hugh O'Brian was awarded the key to the city by Lancaster Mayor George Coe in 1963.[1]

O'Brian first attended school at New Trier High School in Winnetka, Illinois, then the (now defunct) Kemper Military School in Boonville, Missouri; he lettered in football, basketball, wrestling, and track. O'Brian dropped out of the University of Cincinnati after one semester to enlist in the Marine Corps during World War II. At seventeen, he became the youngest Marine drill instructor.[2][3][4][5] 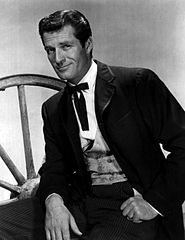 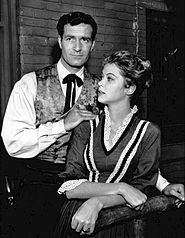 After World War II ended, O'Brian moved to Los Angeles. He had planned on becoming a lawyer and had been accepted at Yale University in the fall of 1947. He was dating an actress and attending her rehearsals of the Somerset Maugham's play Home and Beauty when the lead actor failed to show up. Director Ida Lupino asked him to read the lines. He got the role and the play received a tremendous review. An agent offered to sign O'Brian.[6][7][8]

He changed his name after the series' playbill misspelled his name as "Hugh Krape". "I decided right then I didn't want to go through life being known as Huge Krape, so I decided to take my mother's family name, O'Brien. But they misspelled it as 'O'Brian' and I just decided to stay with that."[1][7]

Lupino then signed him to Never Fear, a film she was directing, which led O'Brian to a contract with Universal Pictures.[9]

He was chosen to portray legendary lawman Wyatt Earp on the ABC western series The Life and Legend of Wyatt Earp, which debuted in 1955. To help develop his character, O'Brian bought Stuart N. Lake's book Wyatt Earp: Frontier Marshal. He also developed a relationship with Lake, who was a consultant on the show for the first two years.[10] The series, alongside Gunsmoke and Cheyenne, which debuted the same year, spearheaded the "adult western" television genre, with the emphasis on character development rather than moral sermonizing. It soon became one of the top-rated shows on television. During its six-year run, Wyatt Earp consistently placed in the top ten in the United States. Decades later, he reprised the role in two episodes of the television series Guns of Paradise (1990), television movie The Gambler Returns: The Luck of the Draw (1991) and the independent film Wyatt Earp: Return to Tombstone (1994), the latter mixing new footage and colorized archival sequences from the original series.

O'Brian appeared regularly on other programs in the 1950s and 1960s, including The Nat King Cole Show, The Jackie Gleason Show, The Ed Sullivan Show and The Dinah Shore Chevy Show all in 1957. He was seen in Jack Palance's ABC circus drama The Greatest Show on Earth. He also appeared as a 'guest attorney' in the 1963 Perry Mason episode "The Case of the Two-Faced Turn-a-bout" when its star, Raymond Burr, was sidelined for a spell after minor emergency surgery. He served as guest host on episodes of The Hollywood Palace in 1964 and the rock music series Shindig! in 1965. He was a guest celebrity panelist on the popular CBS prime-time programs Password and What's My Line? and served as a mystery guest on three occasions on the latter series.

In 1971, he filmed a television pilot titled Probe, playing a high-tech (for the times) agent for a company that specialized in recovering valuable items. The pilot would spawn a series for O'Brian named Search, which ran one season (1972–1973). In 1999 and 2000, he co-starred with Dick Van Patten, Deborah Winters, Richard Roundtree and Richard Anderson in the miniseries Y2K - World in Crisis.[11]

While onstage, Elvis Presley introduced O'Brian from the audience at a performance at the Las Vegas Hilton, as captured in the imported live CD release "April Fool's Dinner". O'Brian was a featured actor in the 1977 two-hour premiere of the popular television series Fantasy Island. He played the last character that John Wayne ever killed on the screen in Wayne's final movie, The Shootist (1976). O'Brian appeared in fight scenes with a Bruce Lee lookalike in Lee's last – partially completed – film, the controversial Game of Death. O'Brian recreated his Wyatt Earp role for three 1990s projects: Guns of Paradise (1990) and The Gambler Returns: The Luck of the Draw (1991), with fellow actor Gene Barry doing likewise as lawman Bat Masterson for each, as well as the independent film Wyatt Earp: Return to Tombstone (1994). He also had a small role in the Danny DeVito/Arnold Schwarzenegger comedy Twins (1988).

On June 25, 2006, at age 81, O'Brian married his girlfriend of 18 years, Virginia Barber (born ca. 1952); it was his first and only marriage. The ceremony was held at Forest Lawn Memorial Park with the Rev. Robert Schuller officiating.[12] Barber, who had been married once previously, is a teacher by profession and the couple spent their honeymoon studying philosophy at Oxford University. O'Brian stated that he believed that "an active mind is as important as an active body."[13] O'Brian has one son, Hugh Jr., by a relationship with photographer Adina Etkes.[14] O'Brian died at his home in Beverly Hills, California on September 5, 2016 at the age of 91.[15]

O'Brian dedicated much of his life to the Hugh O'Brian Youth Leadership (HOBY), a non-profit youth leadership development program for high school scholars. HOBY sponsors 10,000 high school sophomores annually through its over 70 leadership programs in all 50 states and 20 countries. Since its inception in 1958, over 435,000 young people have participated in HOBY-related programs.[citation needed]

One high school sophomore from every high school in the United States, referred to as an "ambassador", is welcome to attend a state or regional HOBY seminar. From each of those seminars, students (number based on population) are offered the opportunity to attend the World Leadership Congress (WLC). In 2008, over 500 ambassadors attended from all 50 states and 20 countries. The concept for HOBY was inspired in 1958 by a nine-day visit O'Brian had with famed humanitarian Dr. Albert Schweitzer in Africa. Dr. Schweitzer believed "the most important thing in education is to teach young people to think for themselves."[citation needed]

O'Brian's message was explained in an essay on the topic:

I do NOT believe we are all born equal. Created equal in the eyes of God, yes, but physical and emotional differences, parental guidelines, varying environments, being in the right place at the right time, all play a role in enhancing or limiting an individual's development. But I DO believe every man and woman, if given the opportunity and encouragement to recognize their potential, regardless of background, has the freedom to choose in our world. Will an individual be a taker or a giver in life? Will that person be satisfied merely to exist or seek a meaningful purpose? Will he or she dare to dream the impossible dream? I believe every person is created as the steward of his or her own destiny with great power for a specific purpose, to share with others, through service, a reverence for life in a spirit of love.

For his contribution to the television industry, Hugh O'Brian has a star on the Hollywood Walk of Fame at 6613½ Hollywood Blvd. In 1992, he was inducted into the Western Performers Hall of Fame at the National Cowboy & Western Heritage Museum in Oklahoma City, Oklahoma.