A hollow-point is an expanding bullet that has a pit or hollowed out shape in its tip, often intended to cause the bullet to expand upon entering a target in order to decrease penetration and disrupt more tissue as it travels through the target. It is also used for controlled penetration, where over-penetration could cause collateral damage (such as on an aircraft). In target shooting, they are used for greater accuracy and reduction of smoke, fouling, and lead vapor exposure, as hollow point bullets have an enclosed base while traditional bullets have an exposed lead base. In essence, the hollow point bullet has several purposes: hollow points are designed to increase in diameter once within the target, thus maximizing tissue damage and blood loss or shock, and to remain inside the target, thereby transferring all of its kinetic energy to that target (some fraction would remain in the bullet if it passed through instead). Jacketed hollow points (JHPs) or plated hollow points are covered in a coating of harder metal (usually a copper alloy or copper coated steel) to increase bullet strength and to prevent fouling the barrel with lead stripped from the bullet. The term hollow-cavity bullet is used to describe a hollow point where the hollow is unusually large, sometimes dominating the volume of the bullet, and causes extreme expansion or fragmentation on impact.[1]

Plastic tipped bullets are a type of (rifle) bullet meant to confer the aerodynamic advantage of the spitzer bullet (for example, see very-low-drag bullet) and the stopping power of hollow point bullets.

When a hollow-point hunting bullet strikes a soft target, the pressure created in the pit forces the material (usually lead) around the inside edge to expand outwards, increasing the axial diameter of the projectile as it passes through. This process is commonly referred to as mushrooming, because the resulting shape, a widened, rounded nose on top of a cylindrical base, typically resembles a mushroom.

The greater frontal surface area of the expanded bullet limits its depth of penetration into the target, and causes more extensive tissue damage along the wound path. Many hollow-point bullets, especially those intended for use at high velocity in centerfire rifles, are jacketed, i.e. a portion of the lead-cored bullet is wrapped in a thin layer of harder metal, such as copper or mild steel. This jacket provides additional strength to the bullet, and can help prevent it from leaving deposits of lead inside the bore. In controlled expansion bullets, the jacket and other internal design characteristics help to prevent the bullet from breaking apart; a fragmented bullet will not penetrate as far.

Where target shooting accuracy is the prime consideration, some bullets such as the Sierra "Matchking" incorporate a cavity in the nose section. This has the effect of lightening the bullet's forward section and shifting the center of mass towards the tail of the bullet, to give an improved ballistic coefficient. An improved ballistic coefficient would yield greater down-range velocity retention and greater resistance to deflection by crosswinds. The manufacturing process of hollow-point bullets allegedly produces a flat, uniformly-shaped base on the bullet which allegedly increases accuracy by providing a more consistent piston surface for the expanding gases of the cartridge. Match or target hollow-point bullets are designed for precision target use, and no consideration is given to their expansion or other terminal ballistic performance. The United States military claims they use hollow-point bullets in some sniper rifles for their exceptional accuracy at long ranges, and claims that the hollow-point does not result in wounds significantly different from full metal jacket ammunition in practice.[2] Most hunters, however, have reported good expansion characteristics and quick, "humane kills"[citation needed] from hollow-point target bullets.

A hollow-point boat-tail (HPBT) bullet is a match grade bullet design that uses the concept of a teardrop-like shape to give it a lower drag coefficient and make it produce less turbulence in its wake. Only the base of the bullet has a boat tail-like shape – the meplat is still pointed. Some hollow-point boat-tail bullets with longer, more aerodynamic profiles are known as very-low-drag (VLD) bullets.

Terminal ballistics testing of hollow point bullets is generally performed in ballistic gelatin, or some other medium intended to simulate tissue and cause a hollow point bullet to expand. Test results are generally given in terms of expanded diameter, penetration depth, and weight retention. Expanded diameter is an indication of the size of the wound cavity, penetration depth shows if vital organs could be reached by the bullet, and weight retention indicates how much of the bullet mass fragmented and separated from the main body of the bullet. How these different factors are interpreted is subject to the intended use of the bullet, and what constitutes "Good" or "Terrible" performance is subject to disagreement.

Solid lead bullets, when cast from a soft alloy, will often deform and provide some expansion if they hit the target at a high velocity. This, combined with the limited velocity and penetration attainable with muzzleloading firearms, meant there was little need for extra expansion.

The first hollow-point bullets were marketed in the late 19th century as express bullets, and were hollowed out to reduce the bullet's mass and provide higher velocities. In addition to providing increased velocities, the hollow also turned out to provide significant expansion, especially when the bullets were cast in a soft lead alloy. Originally intended for rifles, the popular .32-20, .38-40, and .44-40 calibers could also be fired in revolvers.

With the advent of smokeless powder, velocities increased, and bullets got smaller, faster, and lighter. These new bullets (especially in rifles) needed to be jacketed to handle the conditions of firing. The new full metal jacket bullets tended to penetrate straight through a target and produce little damage. This led to the development of the soft point bullet and later jacketed hollow-point bullets at the British arsenal in Dum Dum, near Calcutta around 1890. Designs included the .303" Mk III, IV & V and the .455" Mk III "Manstopper" cartridges. Although such bullet designs were quickly outlawed for use in warfare (in 1898, the Germans complained they breached the Laws of War), they steadily gained ground among hunters due to the ability to control the expansion of the new high velocity cartridges. In modern ammunition, the use of hollow points is primarily limited to handgun ammunition, which tends to operate at much lower velocities than rifle ammunition (on the order of 1,000 feet per second (300 m/s) versus over 2,000 feet per second). At rifle velocities, a hollow point is not needed for reliable expansion and most rifle ammunition makes use of tapered jacket designs to achieve the mushrooming effect. At the lower handgun velocities, hollow point designs are generally the only design which will expand reliably.

Hollow-point bullets were used in the Virginia Tech massacre. These bullets exacerbated the victims' wounds and disfigured the shooter's face when he took his own life.

Modern hollowpoint bullet designs use many different methods to provide controlled expansion, including: 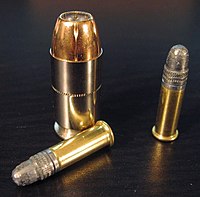 The Hague Convention of 1899, Declaration III, prohibited the use in international warfare of bullets that easily expand or flatten in the body.[3] This is often incorrectly believed to be prohibited in the Geneva Conventions, but it significantly predates those conventions, and is in fact a continuance of the St. Petersburg Declaration of 1868, which banned exploding projectiles of less than 400 grams, as well as weapons designed to aggravate injured soldiers or make their death inevitable. NATO members do not use small arms ammunition that is prohibited by the Hague Convention[citation needed].

Despite the ban on military use, hollow-point bullets are one of the most common types of bullets used by civilians and police,[4] which is due largely to the reduced risk of bystanders being hit by over-penetrating or ricocheted bullets, and the increased speed of incapacitation. In many jurisdictions, even ones such as the United Kingdom, where expanding ammunition is generally prohibited, it is illegal to hunt certain types of game with ammunition that does not expand.[5][6] Some target ranges forbid full metal jacket ammunition, due to its greater tendency to damage metal targets and backstops.[7]

All expanding ammunition, including hollow point bullets, falls under Section 5 (prohibited weapons) of the Firearms Act 1968 and so is illegal to possess or transfer without the written permission of the Home Secretary. The law is in conflict with 'Schedule 2' of 'The Deer Act 1991', prohibiting the use of any ammunition other than soft-nosed or hollow-point bullets for the killing of deer. Because of this conflict, Section 5A(4) allows the police licensing authority to add a condition to a firearm certificate for possession of expanding ammunition for:[5][8]

The state of New Jersey bans possession of hollow point bullets by civilians except for ammunition possessed at one's dwelling, premises or other land owned or possessed. The law also requires all hollow point ammunition to be transported directly from the place of purchase to one's home, or by members of a rifle or pistol club directly to a place of target practice, or directly to an authorized target range from the place of purchase or one's home.[9]

In early 1992, Winchester introduced the "Black Talon", a newly designed hollow-point handgun bullet which used a specially designed, reverse tapered jacket. The jacket was cut at the hollow to intentionally weaken it, and these cuts allowed the jacket to open into six petals upon impact. The thick jacket material kept the tips of the jacket from bending as easily as a normal thickness jacket. The slits that weakened the jacket left triangular shapes in the tip of the jacket, and these triangular sections of jacket would end up pointing out after expansion, leading to the "Talon" name. The bullets were coated with a black colored, paint-like lubricant called "Lubalox," and loaded into nickel-plated brass cases, which made them visually stand out from other ammunition. While actual performance of the Black Talon rounds was not significantly better than any other comparable high performance hollow-point ammunition, the reverse taper jacket did provide reliable expansion under a wide range of conditions, and many police departments adopted the round.[10]

Winchester's "Black Talon" product name was eventually used against them. After a high profile shooting at 101 California Street, San Francisco in 1993, media response against Winchester was swift. "This bullet kills you better", says one report; "its six razorlike claws unfold on impact, expanding to nearly three times the bullet's diameter".[11][12] A concern was raised by the American College of Emergency Physicians that the sharp edges of the jacket could penetrate surgical gloves, increasing the risk of blood-borne infections being transmitted to medical personnel treating the gunshot wound. While plausible, there are no recorded cases of such an infection occurring in relation to the Black Talon bullets.[13]

Winchester responded to the media criticism of the Black Talon line by removing it from the commercial market and only selling it to law enforcement distributors. Winchester has since discontinued the sale of the Black Talon entirely, although Winchester does manufacture very similar ammunition, the Ranger T-Series and the Supreme Elite Bonded PDX1.[14][15]

The hollow point and soft-nosed bullets are both sometimes also referred to as dum-dums, so named after the British arsenal at Dum Dum, in present north Kolkata, India, where it is said jacketed, expanding bullets were first developed.[16][17] This term is rare among shooters in North America, but can still be found in use, usually in the news media and sensational popular fiction.[18] Recreational shooters sometimes refer to hollow points as "JHPs", from the common manufacturer's abbreviation for "Jacketed Hollow Point".

To be most correct, the term "Dum Dum Bullet" refers only to soft-point bullets, not to hollow points, though it is very common for it to be mistakenly used this way.[citation needed]