Hobart's Funnies were a number of unusually modified tanks operated during the Second World War by the United Kingdom's 79th Armoured Division or by specialists from the Royal Engineers. They were designed in light of problems that more standard tanks experienced during the amphibious Dieppe Raid, so that the new models would be able to overcome the problems of the planned Invasion of Normandy. These tanks played a major part on the Commonwealth beaches during the landings. They were forerunners of the modern combat engineering vehicle and were named after their commander, Major General Percy Hobart.

The beginnings of the Funnies started with the need to create a series of modern siege engines to lead the assault on the beach defences of the French coast. A rapid sweeping away of the obstacles and defenders in the British sectors would be important as the lay of the land would favour a rapid counterattack by German armour. Field Marshal Sir Alan Brooke made the decision in 1943 to create these new units. Responsibility for the build up of vehicles and the training of crews to use them was given to armoured warfare expert Percy Hobart after whom the collection was named.

Many of the ideas had already been tried, tested or were in experimental development both by Britain and other nations. For example, the Scorpion flail tank (a modified Matilda tank) had already been used during the North African campaign to clear paths through German minefields. Soviet T-34 tanks had been modified with mine-rollers. Close-support tanks, bridgelayers, and fascine carriers had been developed elsewhere also. However, the Funnies were the largest and most elaborate collection of engineering vehicles available.

By early 1944, Hobart could demonstrate to Eisenhower and Montgomery a brigade each of swimming DD tanks, Crab mine clearers, and Armoured Vehicle Royal Engineers - AVRE (Engineer) tanks along with a regiment of Crocodile flamethrowing tanks.

Montgomery considered that the US forces should use them. A third of the "funnies" were offered to the Americans of all the vehicles available, but take-up was minimal.[1] Eisenhower was in favour of the amphibious tanks but left the decision on the others to General Bradley. None of the other designs were used, because it was thought that they required specialised training and an additional support organisation. Also, the Americans were reluctant to make use of funnies based on the Churchill tank as they did not want the logistical complexity of adding another tank model to their inventory.[2]

In the light of Omaha beach operations, Bradley's decision has been criticised as it was felt that use of the range of "funnies" would have saved American lives.[3] After D-Day, American forces did make limited use of the Sherman Crab mine-clearing tank.[2]

The majority of the designs were modified forms of the Churchill tank or the Sherman tank. Both were available in large numbers. The Churchill had good (though slow) cross-country performance, heavy armour, and a roomy interior. The Sherman's mechanical reliability was valued. Among the many specialist vehicles and their attachments were:

Gallery showing some of Hobart's "Funnies" 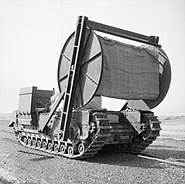 Churchill AVRE with a "bobbin"

Close-up of an AVRE's Petard Mortar 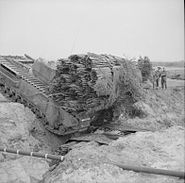 Many of the prototypes and their auxiliary equipment were developed by AEC.[4]

The Centaur bulldozer continued to be used by the British Army for some years after the Second World War and saw action during the Korean War, as did the Churchill Crocodile. Also, small numbers of Churchill AVREs and Sherman BARVs were used until the 1960s when they were replaced with similar vehicles based on the Centurion Tank. The Royal Engineers subsequently used modified Centurion and Chieftain tanks that are designed to fulfill the same roles in battle as the Funnies. The last examples of FV4003 Centurion Mk 5 AVRE 165 saw combat in the Gulf War/Operation Granby of 1991. The most recent vehicles in this line are the Titan and Trojan variants of the Challenger 2 tank.

Armoured bulldozers continue to be used by the Israel Defense Forces and have been recently adopted by the US Marine Corps and the US Army in Iraq.