Military Wiki
Register
Don't have an account?
Sign In
Advertisement
in: Articles incorporating text from Wikipedia, 1921 births, 2005 deaths,
and 13 more

Harold was born in St. Charles, Idaho on January 21, 1921, to Ira N. and Dora R. Hayward. He also had a brother (Sterling) and a sister (Afton). After a year at Cedar City Junior High School in Cedar City, Utah, and one at Madison West High School in Madison, Wisconsin, he completed his education at Logan Senior High School in Logan, Utah, before attending Utah State College in Logan for two years.

He was appointed to the United States Military Academy by Congressman Walter K. Granger of the 1st Utah Congressional District on July 1, 1941. He graduated 306th in his class on June 6, 1944, and was commissioned in the Infantry (ASN: 0–26755).

He earned a Bachelor of Science degree from the United States Military Academy in 1944, a master’s degree in international affairs from George Washington University, and a master's degree in public administration from American University. He graduated from the Army War College in 1963 and the Air Command and Staff College in 1955.

He began free-lance management consulting. For five years he ran workshops and studies for the Bureau of Indian Affairs and the Indian Health Service. At the Army's request, he made an assessment of its drug and alcohol abuse program.

His principal occupation after retirement was teaching a three-day seminar on human resources management for the Institute for Professional Education, a non-profit organization of which he was also a member of the board of directors. The seminar, directed at middle managers in government and private industry, was held a dozen times per year throughout the United States. In addition, he found time to teach management concepts to Marines at Parris Island, South Carolina, and, later, to Air Force personnel at Laughlin Air Force Base in Del Rio, Texas.

He was active in organizing reunions for the Class of 1944 paratroopers at Fort Bragg and took pleasure in attending reunions of the 11th and 13th Divisions. He always enjoyed traveling and exploring, and, in addition to numerous fly fishing expeditions throughout the United States, he visited the Galapagos Islands, the Brazilian Amazon, Mexico, South Africa, and Ireland.

On June 7, 1944, he married Margaret Simpson and together they had three children (Alison, Roxanne, and Carol). She died on November 3, 2011.

He passed away on March 18, 2005, in Dallas, Texas. He was 84 years old. He was buried in the United States Military Academy Post Cemetery in West Point, New York. 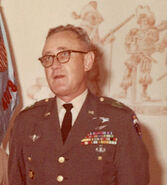 As s Brigadier General while commanding the Berlin Brigade.
Community content is available under CC-BY-SA unless otherwise noted.
Advertisement