Saeqeh (Persian: صاعقه‎, "thunderbolt"), alternatively spelt Sa'eqeh; Saegheh, or Saeqeh-80,[2] is an Iranian built single-seat jet fighter, derived from the American Northrop F-5.[3] A joint product of the Islamic Republic of Iran Air Force and the Iranian Ministry of Defense, it is the second generation of the Iranian Azarakhsh fighter.[4] Saeqeh aircraft were tested successfully in Iran 20 September 2007.

The first prototype of the jet was shown on state television making a test flight in July 2004.[5] According to the translation by the Washington-Based Middle East Media Research Institute (MEMRI) of a broadcast on Islamic Republic of Iran News Network (IRINN), the Saeqeh became operational on September 6, 2006, when it participated in an Iranian military wargame exercise called "Blow of Zulfiqar".[6] In that exercise, which began on August 19, 2006, the new fighter carried out actions described as "a mission to bomb virtual enemy targets",[7] and "a mock bombing mission".[8] Two prototypes, which appeared to differ from the one that had been shown previously, conducted a fly-past at Tehran's Mehrabad Airport on 20 September 2007.[9] Three prototypes took part in a military parade on 22 September 2007.[9]

Iran has announced that it will test fly the other variants of the Saeqeh in the near future which will differ from the previous aircraft due to major changes in its weapon system, aerodynamics and operational range.[10]

Little information on the specifications of the Saeqeh has been released. The Commander of the Islamic Republic of Iran Air Force, Brigadier-General Ahmad Mighani, said that the Saeqeh is up-to-date in terms of aerodynamic balance and in possessing missile and radar systems.[11] The Managing Director of the Aviation Organization of the Ministry of Defense and Logistics of the Armed Forces, Majid Hedayat, described the Saeqeh as a logistic and combat plane with high manoeuvring capability and an ability to bomb close targets.[11]

The airframe is very similar to the Northrop F-5 with twin vertical stabilizers.[citation needed]

In 2008 Iran announced the aircraft has a range of 3,000 km.[12] The fighter-bomber had the ability to track down enemy aircraft, engage in combat, target locations on the ground, and carry an assortment of weapons and ammunition.[13]

The Iranian Minister of Defense, Brigadier-General Mostafa Mohammad Najjar, announced that the Defense Ministry had started to design such a jet on 6 August 2007, which could not be the Saeqeh because it had already flown by that date.[14]

In September 2010, Iran displayed the first squadron of Saeqeh (Thunderbolt) fighter jets produced during an air show staged during military parades at the beginning of the Iranian Sacred Defence Week according to the FARS News Agency.[15] In May 2012 three new-generation Saeqeh (Lightning) fighters have been manufactured and delivered to the Air Force .[16]

On 26 August 2012, deputy Defence Minister Mohammad Eslami announced that an upgraded version of the Saeqeh would be introduced in the Iranian Air Force by the end of the Solar Hijri year 1391.[17] 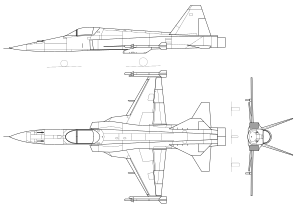