View source
watch 01:54
Obi-Wan Finale - The Loop
Do you like this video?
Play Sound
For other uses, see Grumman (disambiguation).

The Grumman Aircraft Engineering Corporation, later Grumman Aerospace Corporation, was a leading 20th century U.S. producer of military and civilian aircraft. Founded on December 6, 1929, by Leroy Grumman and partners, its independent existence ended in 1994 when it was acquired by Northrop Corporation to form Northrop Grumman.

Leroy Grumman and others worked for the Loening Aircraft Engineering Corporation in the 1920s, but when it was bought by Keystone Aircraft Corporation and the operations moved from New York City to Bristol, Pennsylvania, Grumman and his partners (Edmund Ward Poor,[1] William Schwendler, Jake Swirbul, and Clint Towl) started their own company in an old Cox-Klemin Aircraft Co. factory in Baldwin on Long Island, New York. All of the early Grumman employees were former Loening employees.[2] The company was named for Grumman because he was its largest investor.

The company filed as a business on December 5, 1929, and opened its doors on January 2, 1930. Keeping busy by welding aluminum tubing for truck frames, the company eagerly pursued contracts with the US Navy.[2] Grumman designed the first practical floats with a retractable landing gear for the Navy, and this launched Grumman into the aviation market.[2] The first Grumman aircraft was also for the Navy, the Grumman FF-1, a biplane with retractable landing gear.[2] This was followed by a number of other successful designs.[2]

During World War II, Grumman became known for its "Cats", Navy fighter aircraft, F4F Wildcat and F6F Hellcat, and the less well known Grumman F7F Tigercat and Grumman F8F Bearcat (neither of which saw combat during World War II), and for its torpedo bomber TBF Avenger. Grumman ranked 22nd among United States corporations in the value of wartime production contracts.[3] Grumman's first jet aircraft was the F9F Panther; it was followed by the upgraded F9F/F-9 Cougar, and the less well known F-11 Tiger in the 1950s. The company's big postwar successes came in the 1960s with the A-6 Intruder and E-2 Hawkeye and in the 1970s with the Grumman EA-6B Prowler and F-14 Tomcat. Grumman products were prominent in the film Top Gun and numerous World War II naval and Marine Corps aviation films. The U.S. Navy still employs the Prowler and the Hawkeye as part of Carrier Air Wings on board aircraft carriers as of 2012.

Grumman was the chief contractor on the Apollo Lunar Module that landed men on the moon. The firm received the contract on November 7, 1962, and built 13 lunar modules. As the Apollo program neared its end, Grumman was one of the main competitors for the contract to design and build the Space Shuttle, but lost to Rockwell International. The company ended up involved in the shuttle program nonetheless, as a subcontractor to Rockwell, providing the wings and vertical stabilizer sections.

In 1969 the company changed its name to Grumman Aerospace Corporation, and in 1978 it sold the Grumman-American Division to Gulfstream Aerospace. The company built the Grumman Long Life Vehicle (LLV), a light transport mail truck designed for and used by the United States Postal Service. The LLV entered service in 1986.

For much of the Cold War period Grumman was the largest corporate employer on Long Island.[citation needed] Grumman's products were considered so reliable and ruggedly built that the company was often referred to as the "Grumman Iron Works".[4]

The end of the Cold War at the beginning of the 1990s reduced defense spending and led to a wave of mergers as aerospace companies shrank in number; in 1994 Northrop bought Grumman for $2.1 billion to form Northrop Grumman,[6] after Northrop topped a $1.9 billion offer from Martin Marietta.[7]

The new company closed almost all of its facilities on Long Island and converted the Bethpage plant to a residential and office complex with its headquarters at 1111 Stewart Avenue becoming the corporate headquarters for Cablevision and the Calverton plant being turned into an airport developed by Riverhead, New York.[citation needed] A portion of the airport property has been used for the Grumman Memorial Park. Northrop Grumman's remaining business at the Bethpage campus is the "Battle Management and Engagement Systems Division", which employs around 2,000 people.[when?][citation needed]

Outboard Marine Corp. bought the division in 1990 and produced the last Grumman-brand canoe in 1996. Shortly thereafter former Grumman executives formed the Marathon Boat Group to produce the canoes. In 2000 the Group worked out an agreement with Northrop Grumman to sell the canoes using Grumman name and logo.[10][11] The Grumman canoes with its logo are used in the film Deliverance. 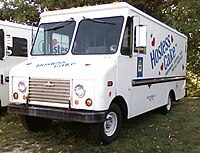