Growth of the Ottoman Empire

The conquest of Constantinople allowed Mehmed II to turn his attention to Anatolia. Mehmed II tried to create a single political entity in Anatolia by capturing Turkish states called Beyliks and the Greek Empire of Trebizond in northeastern Anatolia and allied himself with the Crimean Khanate. Uniting the Anatolian Beyliks was first accomplished by Sultan Bayezid I, more than fifty years earlier than Mehmed II but after the destructive Battle of Ankara back in 1402, the newly formed Anatolian unification was gone. Mehmed II recovered the Ottoman power on other Turkish states. These conquests allowed him to push further into Europe.

Another important political entity which shaped the Eastern policy of Mehmed II was the White Sheep Turcomans. With the leadership of Uzun Hasan, this Turcoman kingdom gained power in the East but because of their strong relations with the Christian powers like Empire of Trebizond and the Republic of Venice and the alliance between Turcomans and Karamanid tribe, Mehmed saw them as a threat to his own power. He led a successful campaign against Uzun Hasan in 1473 which resulted with the decisive victory of the Ottoman Empire in the Battle of Otlukbeli.

After the Fall of Constantinople, Mehmed would also go on to conquer the Despotate of Morea in the Peloponnese in 1460, and the Empire of Trebizond in northeastern Anatolia in 1461. The last two vestiges of Byzantine rule were thus absorbed by the Ottoman Empire. The conquest of Constantinople bestowed immense glory and prestige on the country.

Mehmed II advanced toward Eastern Europe as far as Belgrade, and attempted to conquer the city from John Hunyadi at the Siege of Belgrade in 1456. Hungarian commanders successfully defended the city and Ottomans retreated with heavy losses but at the end, Ottomans occupied nearly all of Serbia.

In 1463, after a dispute over the tribute paid annually by the Bosnian kingdom, Mehmed invaded Bosnia and conquered it very quickly, executing the last Bosnian king Stephen Tomašević and his uncle Radivoj.

In 1462 Mehmed II came into conflict with Prince Vlad III Dracula of Wallachia, who had spent part of his childhood alongside Mehmed.[1] Vlad had ambushed, massacred or captured several Ottoman forces, then announced his impalement of over 23,000 captive Turks. Mehmed II abandoned his siege of Corinth to launch a punitive attack against Vlad in Wallachia[2] but suffered many casualties in a surprise night attack led by Vlad, who was apparently bent on personally killing the Sultan.[3] Confronted by Vlad's scorched earth policies and demoralizing brutality, Mehmed II withdrew, leaving his ally Radu cel Frumos, Vlad's brother, with a small force in order to win over local boyars who had been persecuted by Vlad III. Radu eventually managed to take control of Wallachia, which he administered as Bey, on behalf of Mehmet II. Vlad eventually escaped to Hungary, where he was imprisoned on a false accusation of treason against his overlord.

In 1475, the Ottomans suffered a great defeat at the hands of Stephen the Great of Moldavia at the Battle of Vaslui. In 1476, Mehmed won a pyrrhic victory against Stephen at the Battle of Valea Albă. He besieged the capital of Suceava, but could not take it, nor could he take the Castle of Târgu Neamţ. With a plague running in his camp and food and water being very scarce, Mehmed was forced to retreat.

The Albanian resistance in Albania between 1443 and 1468 led by George Kastrioti Skanderbeg (İskender Bey), an Albanian noble and a former member of the Ottoman ruling elite, prevented the Ottoman expansion into the Italian peninsula. Skanderbeg had united the Albanian Principalities in a fight against the Empire in the League of Lezhë in 1444. Mehmed II couldn't subjugate Albania and Skanderbeg while the latter was alive, even though twice (1466 and 1467) he led the Ottoman armies himself against Krujë. After death of Skanderbeg in 1468, Albanians couldn't find a leader to replace him and Mehmed II eventually conquered Krujë and Albania in 1478. The final act of his Albanian campaigns was the troublesome siege of Shkodra in 1478–9, a siege Mehmed II led personally.

Mehmed II invaded Italy in 1480. The intent of his invasion was to capture Rome and "reunite the Roman Empire", and, at first, looked like he might be able to do it with the easy capture of Otranto in 1480 but Otranto was retaken by Papal forces in 1481 after the death of Mehmed. After his death, he was succeeded by his son, Bayezid II.

When Bayezid II was enthroned upon his father's death in 1481, he first had to fight his younger brother Cem Sultan, who took Inegöl and Bursa and proclaimed himself Sultan of Anatolia. After a battle at Yenişehir, Cem was defeated and fled to Cairo. The very next year he returned, supported by the Mameluks, and took eastern Anatolia, Ankara and Konya but eventually he was beaten and forced to flee to Rhodes.

Sultan Bayezid attacked Venice in 1499. Peace was signed in 1503, and the Ottomans gained the last Venetian strongholds on the Peloponnesos and some towns along the Adriatic coast. In the 16th century Mameluks and Persians under Shah Ismail I allied against the Ottomans. The war ended 1511 in favor of the Turks.

Later that year, Bayezid's son Ahmet forced his father into making him regent. His brother Selim was forced to flee to Crimea. When Ahmet was about to be crowned the Janissaries intervened, killed the prince and forced Bayezid into calling Selim back and making him the sultan. Bayezid abdicated and he died immediately after leaving the throne.

During his reign, Selim I (so called Yavuz, the Grim) was able to expand the empire's borders greatly to the south and east. He defeated the Mameluks and conquered most of modern Syria, Lebanon, Palestine, and Egypt, including the holy city of Jerusalem as well as Cairo, the residence of the Abbasid caliph. Thus, Selim was able to proclaim himself caliph of Islam.

Selim I conquered Safavid eastern Anatolia and northern Iraq, only to lose it soon after. The Safavids later defeated and conquered the eastern Ottomans, and captured Baghdad. The Empire established a navy in the Red Sea that succeeded, at least for a while, in countering Portuguese influence on the spice trade. During this period, the Empire vied with the emerging European colonial powers, in the Indian Ocean. Fleets, with soldiers and arms, were sent to support Muslim rulers in Kenya and Aceh (on the northern tip of the island of Sumatra), and to defend the Ottoman spice and slave trades. In Aceh, the Ottomans built a fortress, and supplied it with huge cannons. The Dutch Protestants were at first helped by the Ottomans in their struggle against Catholic Spain. The Ottoman navy also had much influence in the Mediterranean Sea, and trade there flourished, because of the stability afforded to the shipping lanes.

At the Battle of Chaldiran in eastern Anatolia in 1514, Ottoman forces under Sultan Selim I won a decisive victory against the Safavids, ensuring Ottoman security on their eastern front.

Suleiman the Magnificent first put down a revolt led by the Ottoman-appointed governor in Damascus. By August, 1521, Suleiman had completed the conquest of Serbia capturing the city of Belgrade. In 1522, Suleiman captured Rhodes. On August 29, 1526 Suleiman defeated Louis II of Hungary at the Battle of Mohács, and set up Ottoman rule in Hungary. By 1541, Suleiman controlled most of present-day Hungary, known as the Great Alföld, and installed Zápolya's family as rulers of the independent principality of Transylvania, a vassal state of the Empire. (Walachia and Moldavia also became tributary principalities of the Ottoman Empire.) Holy Roman Emperor Ferdinand I claimed the so-called "Royal Hungary" (present-day Slovakia, North-Western Hungary and western Croatia), a territory which temporarily fixed the border between the Habsburgs and the Ottomans.

The Shi'ite Safavid Empire ruled Persia and modern-day Iraq. Suleiman waged three campaigns against the Safavids; in the earliest, the historically important city of Baghdad fell to Suleiman's forces in 1534. The second campaign, 1548–1549, resulted in temporary Ottoman gains in Tabriz and Azerbaijan, a lasting presence in Van Province, and some forts in Georgia. In his third campaign, in 1555, Suleiman's forces failed to eliminate the Shah's army, which withdrew into the mountains of Luristan, and eventually signed a treaty at Amasya, in which the Shah recognized the existing borders and promised to end his raids into Ottoman territory. Huge territories of North Africa up to west of Algeria were annexed. The Barbary States of Tripolitania, Tunisia and Algeria became autonomous provinces of the Empire. The piracy carried on thereafter by the Barbary pirates of North Africa remained part of the wars against Spain, and the Ottoman expansion was associated with naval dominance for a short period in the Mediterranean.

Ottoman navies also controlled the Red Sea, and held the Persian Gulf until 1554, when their ships were defeated by the navy of the Portuguese Empire. The Portuguese would continue to contest Suleiman's forces for control of Aden. In 1533 Khair ad Din known to Europeans as Barbarossa, was made Admiral-in-Chief of the Ottoman navies were who actively fighting the Spanish navy.

In 1535 the Habsburg Holy Roman Emperor, Charles V (Charles I of Spain) won an important victory against the Ottomans at Tunis, but in 1536 King Francis I of France allied himself with Suleiman against Charles. In 1538, the fleet of Charles V was defeated at the Battle of Preveza by Khair ad Din, securing the eastern Mediterranean for the Turks for 33 years. Francis I asked for help from Suleiman, then sent a fleet headed by Khair ad Din who was victorious over the Spaniards, and managed to retake Naples from them. Suleiman bestowed on him the title of Baylar Bey. One result of the alliance was the fierce sea duel between Dragut and Andrea Doria, which left the northern Mediterranean and the southern Mediterranean in Ottoman's hands.

Thereafter, attention reverted to the west, and Suleiman I, upon ascending the throne in 1520, led a series of campaigns into the Balkans. Under Suleiman, a brilliant strategist, the Ottomans advanced steadily northward, taking Belgrade, the capital of Serbia in 1521, defeating Hungary in 1526, and besieging Vienna in 1529.

Sokollu Mehmed Paşa was one of the Grand Viziers of Suleiman but he gained absolute power after the death of Suleiman. During the reign of Selim II, he became the real ruler of the Ottoman Empire, a situation which lasted until Mehmed Pasha's death in 1579.

Selim's successor was Murat III (1574–1595) during whose reign the empire reached its gretest extend by capturing Caucasus (1590).

Murat's successor was Mehmet III. During the last years of Murat's reign and whole of Mehmet's reign, the Ottoman empire was engaged in a war so called Long War (1591–1606) in which the Ottoman extension was checked by the Habsburg Empire. The Ottoman standing on the Eastern frontier was not better, particularly in Transcaucasia. Yerevan fell to Savafids in 1604, followed by other defeats.

End of the Growth era

According to Turkish historians, Mehmet Pasha's death in 1579 during the reign of Murat III marked the end of the growth era.[4] The first written document which proves a stagnation era had begun was the Peace of Zsitvatorok following the Long War (1591–1606) in 1606 during the reign of Ahmet I. Up to Zsitvatorok, Ottomans considered the The Habsburg Empire inferior to the Ottomans. In Zsitvarorok, they accepted the equality of the two empires.[5] 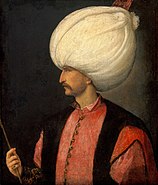