Gonzalo Jiménez de Quesada y Rivera, also spelled as De Quezada and Ximénez, (1496[1] – other sources state 1506 or 1509[2][3] – Suesca, 16 February 1579) was a Spanish explorer and conquistador in northern South America, territories currently known as Colombia. He explored the northern part of South America. As a well-educated lawyer he was one of the intellectuals of the Spanish conquest. He was an effective organizer and leader, designed the first legislation for the government of the area, and was its historian. After 1569 he undertook explorations toward the east, searching for the elusive El Dorado, but returned to New Granada in 1573. He has been suggested as a possible model for Cervantes' Don Quixote.[4]

His father, Luis Jiménez de Quesada,[5] was a hidalgo relative of Gonzalo Francisco de Cordoba, and he had two well-known distant cousins, the conquistadores of Mexico and Peru respectively: Hernán Cortés and Francisco Pizarro. Gonzalo Jiménez de Quesada was born in Cordova, or in Granada, Spain, into a Marrano family which had converted to Catholicism before he was born.[6] He had three younger brothers; Hernán and Francisco, who also were conquistadors, and Melchor, and a sister, Andrea.[7]

Conquest of the Muisca Confederation

De Quesada was an Andalusian lawyer, trained in Granada.[8] He was appointed chief magistrate in 1535 and second in command for an expedition to present-day Colombia, because in that period he was not in good standing with the people at home because he had just lost an important court case in which his mother’s family was economically involved.[9] The commander of the expedition, Pedro Fernández de Lugo (governor of the Canary Islands), had bought the governorship of Colombia and had equipped a fleet and assembled over a thousand men. And so they set sail to Colombia, thinking they would find a very rich land, full of gold and pearls. But when, after two month of navigation, they reached the small coastal settlement of Santa Marta, all they found was a conglomeration of hovels and filthy, disease-ridden colonists who went about dressed in skins or roughly woven and padded cotton clothes made by the Indians. Soon food became scarce and tropical fevers began to smite down the strongest.

In 1536, De Quesada was chosen by De Lugo to command an expedition without any military experience to explore into the interior of New Granada, hoping to discover the dreamed El Dorado. A land party under De Quesada, with Hernán Pérez de Quesada (his brother), Juan San Martín, Juan del Junco (as second in command) Lázaro Fonte and Sergio Bustillo, struck south from Santa Marta, crossed the Cesar River, and arrived at Tamalameque on the Magdalena River. A support fleet of 6 (or 5) ships had also sailed from Santa Marta with 900 men to navigate the Magdalena.[8] Only two of the vessels actually arrived at Tamalameque, and subsequently returned to Santa Marta with many of De Quesada's men. Continuing up the Magdalena as far as La Tora (Barrancabermeja), De Quesada and his men ascended the Opon River into the cordillera, reaching the Opon hills, Chipata (near Vélez) (March 1537) and the valley of the Suárez River. Passing Lake Fúquene and Lake Suesca, they reached Nemocón and Zipaquirá and finally entered the Muisca Confederation (ruled from Bacatá, present day Bogotá and Hunza, today known as Tunja).

Only 166 men out of 900 survived, suffering terribly in the jungle: they were forced to eat snakes, lizards, frogs, and even the leather torn from their harnesses and the scabbards of their swords. In Bogotá, Quesada resigned and called for an election; he was elected captain-general, and threw off the last link that held him to the governor. The Muisca had two rulers. The zipa Tisquesusa, ruled in Bogotá; the other, the zaque Quemuenchatocha, ruled in Tunja. Taking advantage of a war between the two chiefdoms, Quesada's force subdued Bogotá and then successfully attacked Tunja. At this point it was time to establish a colony so that the earth itself might properly belong to De Quesada and his men. They chose a spot next to the towering peaks of the east, where the land was high and the rains would quickly run off, where the mountains would protect them from attackers and the jungles below. Quesada placed his right foot on the bare earth and said simply, "I take possession of this land in the name of the most sovereign emperor, Charles V." The settlement was at first called New City of Granada, but later they changed it to Santa Fé de Bogotá, now known simply as Bogotá, from the Chibcha word Bacatá, the name of one of the two main cacicazgos of the Muisca Confederation.

Quesada remained in the region until the arrival of two expeditions at the end of 1538: Sebastián de Belalcázar from Quito, Ecuador, one of the captains of Pizarro who had mutinied against his leader; and Nikolaus Federmann, a German from Venezuela who had rebelled against another German named Hohermuth. The three captains met on the savanna of New Granada. All three wanted to claim New Granada for themselves. In order to resolve their dispute, De Quesada persuaded them to go back to Spain with him and to submit their rival territorial claims to the arbitration of the crown. In July 1539, they sailed for Spain from Cartagena. However, none of them obtained the governorship. De Quesada, after nearly a dozen years of wandering disconsolately through the gaming halls of Europe, returned to New Granada in 1550. Here, he settled down to live for nearly twenty years. He was a respected colonist, becoming the most influential man in the colony. He protected his fellow colonists from the severity of the officials and restrained the encomenderos (large landholders) greed. But his own desire for wealth and gold continued to live inside him.

In 1569, at the age of 63, De Quesada received a commission to conquer the Llanos to the east of the Colombian cordillera. From Bogotá in April 1569 with 500 mounted soldiers, 1500 natives, 1100 horses and pack animals, 600 head of cattle, 800 pigs, a large number of negro slaves and 8 priests, he first descended to Mesetas on the upper Guejar River. There most of the livestock was destroyed by a grass fire. De Quesada's expedition then moved to nearby San Juan de los Llanos, where a course was set for east-southeast (by the guide Pedro Soleto), and maintained for the following two years. After a year or so some men returned with Juan Maldonado, reaching San Juan after six months with few survivors. De Quesada eventually reached (San Fernando de) Atabapo at the confluence of the Guaviare and the Orinoco (in December 1571), any further movement requiring the construction of ships. He therefore dejectedly returned to Bogotá, arriving in December 1572 with only 25 Spaniards, 4 natives, 18 horses and 2 priests. The expedition had been one of the most expensive disasters on record. After a brief period of service in a frontier command (during which he suppressed an indigenous uprising) De Quesada, afflicted with leprosy, overcome with despair at his debts, owing more than 60 thousand ducats, was forced to seek a milder climate and died quietly, aged 70 to 85, in Suesca, an important market town in the New Kingdom of Granada.

After his death in Suesca, De Quesada's body was taken to Mariquita where he was buried in the Santa Lucía Abbey. His remains were there until 1597 when they were exhumed and transferred to Bogotá, the city founded by him. 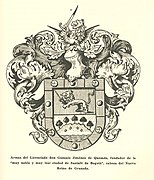 Cunningham graham, R. b.. 1922. The Conquest of New Granada, Being the Life of Gonzalo Jimenez de Quesada. W. Heinemann.