Giorgio Basta, Count of Huszt (1544–1607) was an Italian general employed by the Holy Roman Emperor Rudolf II to command Habsburg forces in the Long War of 1591-1606 and later to administer Transylvania as an Imperial vassal[1] to restore Catholicism as a predominant religion in Transylvania.[2]

On his orders, his ally Michael the Brave, the former ruler of Transylvania, Wallachia and Moldavia, was assassinated at Keresztesmező camp,[3][4][5] near Câmpia Turzii, because Basta considered him a liability. The event happened on 9 August 1601,[6] only days after a joint victory in Battle of Guruslău. During his brief period of control over Transylvania, Basta tried to uproot Protestantism. Following Papal imperial policy, Calvinist Hungarians, Szeklers, Walachians, Serbs, and Lutheran Saxons were subject to any kind of abuse. Following years of warfare and his ruthless regime famine and plague appeared in Transylvania. In 1604 Basta defeated twice the forces led by Stephen Bocskay who attempted to oppose his rule over Transylvania.[7]

After his experiences of warfare in Eastern Europe he went to Prague where he died. Basta wrote several military manuals, the best known of which is his Il maestro di campo generale...(Venice 1606), and his posthumous work Il governo della cavalleria leggiera (Venice 1612).[8] 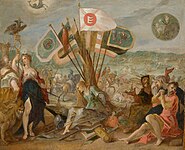