The German Tank Museum (German language: Deutsches Panzermuseum) is an armoured fighting vehicle museum in Munster, Germany, the location of the Munster Training Area camp. Its main aim is the documentation of the history of German armoured troops since 1917. It originated in 1983 from the instructional collection of the Panzertruppenschule, the Bundeswehr ("German Army") school for training officers and NCO's of German armoured units. It is now a museum open to the public, jointly run by the municipality of Munster and the Panzertruppenschule.

The heart of the exhibition is a collection of about 40 Bundeswehr and former East German (Nationale Volksarmee) tanks as well as 40 German tanks and other Wehrmacht vehicles from the Second World War. In addition there are tanks from the Red Army, British Army and United States Army from the war. Most of the vehicles are in working order, with restoration work ongoing to render all examples functional. The restoration staff of the museum do extensive research on every vehicle in order to return it to its original configuration and paint scheme.

Numerous other military-historic exhibits enhance the vehicle displays, including an international collection of steel helmets and specific exhibits relating to Erwin Rommel that include many of his personal possessions. Also, every type of firearm and weapon used by the German Army in both world wars is displayed.

The large collection of armoured vehicles includes some rare or unique types. For example, the museum has an authentic replica of an A7V German First World War tank, the only example of its type in Europe, and an armoured police vehicle from the Weimar Republic era. In addition it has one of only two existing Sturmpanzer VI as well as a prototype version of the Jagdpanzer IV. From the post-war era there is a range of Bundeswehr prototypes, including a Leopard 1, Kanonenjagdpanzer tank destroyer and MBT-70, the abortive US-German design. The interior of an American M48 Patton tank, situated outside, can be entered via a flight of steps.

Leopard I (prototype no 2)

Panzer I, Mark A on a turntable

Tiger II with the production turret 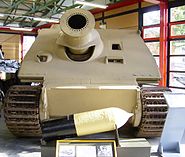 A7V (copy of the original tank)