The General Dynamics/Grumman F-111B was developed as a long-range carrier-based interceptor follow-on to the F-4 Phantom II. It was developed in the 1960s by General Dynamics in conjunction with Grumman for the United States Navy (USN) as part of the joint Tactical Fighter Experimental (TFX) with the United States Air Force (USAF) to produce a common fighter across services for a variety of missions. The F-111B incorporated innovations such as variable-geometry wings, afterburning turbofan engines, and the long-range AWG-9/AIM-54 Phoenix weapons system.

Designed in parallel with the F-111 "Aardvark", which was adopted by the Air Force as a strike aircraft, the F-111B suffered development issues and changing Navy requirements for an aircraft with maneuverability for dogfighting. The F-111B was not ordered into production and the F-111B prototypes were used for testing before being retired. The F-111B would be replaced by the smaller and lighter Grumman F-14 Tomcat, which carried over the engines, AWG-9/Phoenix weapons system, and similar swing-wing configuration.

The F-111B was part of the TFX program, an ambitious early-1960s project to combine the U.S. Air Force requirement for a fighter-bomber with the U.S. Navy's need for a long-range carrier-based Fleet Air Defense fighter.

The USAF's Tactical Air Command (TAC) was largely concerned with the fighter-bomber and deep strike/interdiction roles. The aircraft would be a follow-on to the F-105 Thunderchief. In June 1960 the USAF issued a specification for a long-range interdiction/strike aircraft able to penetrate Soviet air defenses at very low altitudes and very high speeds to deliver tactical nuclear weapons against crucial targets.[2] Meanwhile the U.S. Navy sought a long-range, high-endurance interceptor to defend its carrier battle groups against long-range anti-ship missiles launched from Soviet jet bombers and submarines. The Navy needed a Fleet Air Defense (FAD) aircraft with a more powerful radar, and longer range missiles than the F-4 Phantom II to intercept both enemy bombers and missiles.[3]

The Air Force and Navy requirements appeared to be different. However, on 14 February 1961 the new U.S. Secretary of Defense, Robert McNamara, formally directed that the services study the development of a single aircraft that would satisfy both requirements. Early studies indicated the best option was to base the Tactical Fighter Experimental (TFX) on the Air Force requirement and a modified version for the Navy.[4] In June 1961, Secretary McNamara ordered the go ahead on TFX despite Air Force and the Navy efforts to keep their programs separate.[5] The USAF and the Navy could only agree on swing-wing, two seat, twin engine design features. The USAF wanted a tandem seat aircraft for low level penetration, while the Navy wanted a shorter, high altitude interceptor with side by side seating.[4] Also, the USAF wanted the aircraft designed for 7.33 g with Mach 2.5 speed at altitude and Mach 1.2 speed at low level with a length of approximately 70 ft (21.3 m). The Navy had less strenuous requirements of 6 g with Mach 2 speed at altitude and high subsonic speed (approx. Mach 0.9) at low level with a length of 56 ft (17.1 m).[4][6] The Navy also wanted a 48-inch (122 cm) radar dish for long range and a maximum takeoff weight of 50,000 lb (22,700 kg).[7] So McNamara developed a basic set of requirements for TFX based largely on the Air Force's requirements. He changed to a 36-inch (91.4 cm) dish for compatibility and increased the maximum weight to approximately 60,000 lb (27,200 kg) for the Air Force version and 55,000 lb (24,900 kg) for the Navy version. Then on 1 September 1961 he ordered the USAF to develop it.[6][7]

A request for proposal (RFP) for the TFX was provided to industry in October 1961. In December of that year Boeing, General Dynamics, Lockheed, McDonnell, North American and Republic submitted their proposals. The proposal evaluation group found all the proposals lacking, but the best should be improved with study contracts. Boeing and General Dynamics were selected to enhance their designs. Three rounds of updates to the proposals were conducted with Boeing being picked by the selection board. Instead Secretary McNamara selected General Dynamics' proposal in November 1962 due to its greater commonality between Air Force and Navy TFX versions. The Boeing aircraft versions shared less than half of the major structural components. General Dynamics signed the TFX contract in December 1962. A Congressional investigation followed, but could not change the selection.[8]

The Air Force F-111A and Navy F-111B variants used the same airframe structural components and TF30-P-1 turbofan engines. They featured side by side crew seating in escape capsule as required by the Navy. The F-111B's nose was 8.5 feet (2.59 m) shorter due to its need to fit on existing carrier elevator decks, and had 3.5 feet (1.07 m) longer wingtips to improve on-station endurance time. The Navy version would carry an AN/AWG-9 Pulse-Doppler radar and six AIM-54 Phoenix missiles. The Air Force version would carry the AN/APQ-113 attack radar and the AN/APQ-110 terrain-following radar and air-to-ground armament.[9]

Lacking experience with carrier-based fighters, General Dynamics teamed with Grumman for assembly and test of the F-111B aircraft. In addition, Grumman would also build the F-111A's aft fuselage and the landing gear. The first test F-111A was powered by YTF30-P-1 turbofans and used a set of ejector seats as the escape capsule was not yet available.[9] It first flew on 21 December 1964.[10] The first F-111B was also equipped with ejector seats and first flew on 18 May 1965.[11] To address stall issues in certain parts of the flight regime, the F-111's engine inlet design was modified in 1965–66, ending with the "Triple Plow I" and "Triple Plow II" designs.[12] The F-111A achieved a speed of Mach 1.3 in February 1965 with an interim intake design.[9][12]

The weight goals for both F-111 versions proved to be overly optimistic.[13] Excessive weight plagued the F-111B throughout its development. The prototypes were far over the requirement weight. Design efforts reduced airframe weight but were offset by the addition of the escape capsule. The additional weight made the aircraft underpowered. Lift was improved by changes to wing control surfaces. A higher thrust version of the engine was planned.[14]

Requirements for the F-111B had been formulated before air combat over Vietnam in 1965 showed the Navy had a need for an aircraft which could engage fighters at close range. The Navy desired a fighter with more performance than the F-4 Phantom II, yet in trials, the maneuverability and performance of the F-111B was decidedly inferior to the Phantom.[citation needed] During the congressional hearings for the aircraft, Vice Admiral Thomas F. Connolly, then Deputy Chief of Naval Operations for Air Warfare, responded to a question from Senator John C. Stennis as to whether a more powerful engine would cure the aircraft's woes, saying, "There isn't enough power in all Christendom to make that airplane what we want!"[15]

With the F-111B program in distress, Grumman began studying improvements and alternatives. In 1966 the Navy awarded Grumman a contract to begin studying advanced fighter designs. Grumman narrowed down these designs to its Model 303 design.[16] With this the F-111B's end appeared near by mid-1967.[17] By May 1968 both Armed Services committees of Congress voted not to fund production and in July 1968 the DoD ordered work stopped on F-111B.[18] A total of seven F-111Bs were delivered by February 1969.[19]

The F-111B's replacement, the Grumman F-14 Tomcat, which derived from Grumman's initial Model 303 design, reused the TF30 engines from the F-111B, though the Navy planned on replacing them with an improved engine later.[20] Although lighter than the F-111B, it was still the largest and heaviest U.S. fighter to takeoff and land from an aircraft carrier.[21] Its size was a consequence of the requirement to carry the large AWG-9 radar and AIM-54 Phoenix missiles, both from the F-111B, while exceeding the F-4's maneuverability.[22] While the F-111B was armed only for the interceptor role, the Tomcat incorporated an internal M61 Vulcan cannon, provisions for Sidewinder and Sparrow air-to air missiles, and provisions for bombs.[23][24] While F-111B did not reach service, land-based F-111 variants were in service with the U.S. Air Force for many years and with Australia until 2010.

The F-111B was an all-weather interceptor aircraft intended to defend U.S. Navy carrier battle groups against bombers and anti-ship missiles.[25] The F-111 features variable geometry wings, an internal weapons bay and a cockpit with side by side seating. The cockpit is part of an escape crew capsule.[26] The wing sweep varies between 16 degrees and 72.5 degrees (full forward to full sweep).[27] The airframe consisted mostly of aluminum alloys with steel, titanium and other materials also used.[28] The fuselage is a semi-monocoque structure with stiffened panels and honeycomb sandwich panels for skin.[27][28] The F-111B was powered by two Pratt & Whitney TF30 afterburning turbofan engines and included the AN/AWG-9 radar system for controlling the AIM-54 Phoenix air-to-air missiles.[29]

The F-111 offered a platform with the range, payload, and Mach-2 performance to intercept targets quickly, but with swing wings and turbofan engines, it could also loiter on station for long periods. The F-111B would carry six AIM-54 Phoenix missiles, its main armament. Four of the Phoenix missiles mounted on wing pylons and two in the weapons bay.[25]

Flight tests on the F-111B continued at Point Mugu and China Lake even after the program had been terminated.[11] In July 1968 the pre-production F-111B serial number 151974 was used for carrier trials aboard USS Coral Sea. The evaluation was completed without issue.[30]

F-111B numbers 1 to 3 were initial prototypes, and No. 4 to 5 were prototypes with lightened airframes.[31] No. 6–7 had lightened airframes and improved TF30-P-12 engines and were built to near production standard.[31] These are also approximately 2 feet (0.6 m) longer due to an added section between cockpit and radome.[32] The first five aircraft included the Triple Plow I intakes. The last two had Triple Plow II intakes.[33] The first three B-models were fitted with ejection seats and the remainder included the escape crew capsule.[34] 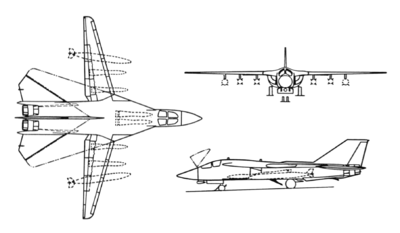