A gate or gateway is a point of entry to a space enclosed by walls, or a moderately sized opening in some sort of fence. Gates may prevent or control the entry or exit of individuals, or they may be merely decorative. Other terms for gate include yett and port. The word derives from the old Norse "gata", meaning road or path, and originally referred to the gap in the wall or fence, rather than the barrier which closed it.

A gate may have a latch to keep it from swinging and a lock for security. Larger gates can be used for a whole building, such as a castle or fortified town, or the actual doors that block entry through the gatehouse. Today, many gate doors are opened by an automated gate operator.

Types of gates include:

This gate does not prevent entry but clearly suggests a borderline

A small but elegant gate to a meadow path

Ishtar Gate is the oldest city gate in existence

Medieval ironclad city gate, from the Upper Gate in the old town of Ohrid

Gates decorate routes in the entrance of Muscat, Oman

Ernst Rudolph By the Entrance 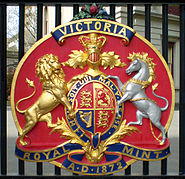