The Ottoman War Medal (Turkish language: Harp Madalyası), better known as the Gallipoli Star, or the Iron Crescent (from German Eiserner Halbmond, in allusion to the Iron Cross) was a military decoration of the Ottoman Empire which was instituted by the Sultan Mehmed Reshad V on 1 March 1915 for gallantry in battle. This decoration was awarded for the duration of World War I to Ottoman and other Central Powers troops, primarily in Ottoman areas of engagement.

The award includes a badge, ribbon and campaign bar.

The medal, made of nickel-plated brass, has a vaulted star-shaped badge, 56 mm across the diagonal span of the arms. The tips of the star are capped by ball finials and enclosed in a raised silver edge with the field in red lacquer or enamel. A raised crescent, open at the top, encircles the center of the badge. Inside the crescent is the tughra or cipher of the decoration's creator, Sultan Mehmed Reshad V, over the date 1333 AH (AD 1915). The reverse is flat, unadorned and has a straight pin.

The campaign bar is a right-pointing parabola of white at 56mm in length and 7mm in height. In the field is red Arabic script denoting the specific campaign:

When in formal dress, the badge was worn at the center, below the right breast pocket. Wear of the badge was exclusive; in everyday wear was substituted by the ribbon. The ribbon was worn from the second hole in the tunic button. Medal was not worn attached to the ribbon. When the medal is worn, ribbon can not be worn.

For Austrian and German recipients (usually members of the Asienkorps), the award took lower precedence to their own Iron Cross 2nd class, and the ribbon of the Iron Crescent was placed beneath that of the Iron Cross.

The ribbon could also be fashioned into a chest riband for placement on a ribbon bar when in undress.

The campaign bar was usually not worn. 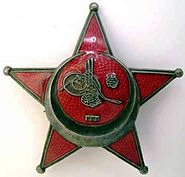