View source
watch 01:54
Obi-Wan Finale - The Loop
Do you like this video?
Play Sound
"MOAB" redirects here. For other uses, see Moab (disambiguation).

The GBU-43/B Massive Ordnance Air Blast (MOAB pronounced /ˈmoʊ.æb/, commonly known as the Mother of All Bombs) is a large-yield conventional (non-nuclear) bomb, developed for the United States military by Albert L. Weimorts, Jr. of the Air Force Research Laboratory.[1] At the time of development, it was touted as the most powerful non-nuclear weapon ever designed.[2] The bomb was designed to be delivered by a C-130 Hercules, primarily the MC-130E Combat Talon I or MC-130H Combat Talon II variants. Since then, Russia has tested its Father of All Bombs, which is claimed to be four times more powerful than the MOAB.[3]

It was first tested with the explosive tritonal on 11 March 2003, on Range 70 located at Eglin Air Force Base in Florida. It was again tested on 21 November 2003.[2] Aside from two test articles, the only known production is of 15 units at the McAlester Army Ammunition Plant in 2003 in support of the Iraq War. A single MOAB was moved to the Persian Gulf area in April 2003 but it was never used.[4] Since none of those are known to have been used as of early 2007, the U.S. inventory of GBU-43/B presumably remained at approximately 15. On 13 April 2017 a single MOAB was dropped on the ISIL tunnel complex in the Nangarhar Province of Afghanistan. The MOAB was chosen by the area commander due to the failure of lighter weapons dropped by fighter/bomber aircraft to reduce the tunnel complex. Afghani personnel reported that 96 ISIL members were killed including four commanders. [1]

The basic operational concept bears some similarity to the BLU-82 Daisy Cutter, which was used to clear heavily wooded areas in the Vietnam War and in Iraq to clear mines and later as a psychological weapon against the Iraqi military. After witnessing the psychological impact of the BLU-82 on enemy soldiers, and not having any BLU-82 weapons remaining, the MOAB was developed partly to continue the role of intimidating the Iraqi soldiers. Pentagon officials had suggested their intention to use MOAB as an anti-personnel weapon, as part of the "shock and awe" strategy integral to the 2003 invasion of Iraq.[5] The MOAB is not a penetrator weapon and is primarily intended for soft to medium surface targets covering extended areas and targets in a contained environment such as a deep canyon or within a cave system. However, multiple strikes with lower yield ordnance may be more effective and can be delivered by fighter/bombers such as the F-16 with greater stand-off capability than the C-130 and C-17. High altitude carpet-bombing with much smaller 230 to 910 kilograms (500 to 2,000 lb) bombs delivered via heavy bombers such as the B-52 or B-2 is also highly effective at covering large areas.[6] 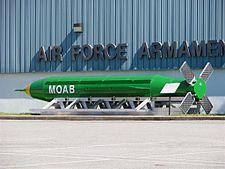 Al Weimorts (left), the creator of the GBU-43/B Massive Ordnance Air Blast bomb, and Joseph Fellenz, lead model maker, look over the prototype before it was painted and tested.
MOABtest.jpg
Prototype MOAB an instant before impact on Eglin AFB's Range 70.