A full metal jacket (or FMJ) is a bullet consisting of a soft core (usually made of lead) encased in a shell of harder metal, such as gilding metal, cupronickel or less commonly a steel alloy. This shell can extend around all of the bullet (alternatively termed a total metal jacket round) or, more often, just around the front and sides with the rear lead part left exposed. The jacket allows for higher muzzle velocities than bare lead without depositing significant amounts of metal in the bore. It also prevents damage to bores from steel or armor-piercing core materials. The appearance of FMJ ammunition is highly distinctive when compared to hollow-point or soft point bullets. Historically, the first successful full metal jacket rifle bullets were invented by Lt. Col. Eduard Rubin of the Swiss Army in 1882.[1][2][3][4] Full metal jacket bullets were first used as standard ammunition in 1886, for the French Mle 1886 Lebel rifle.[citation needed]

There are some disadvantages to jacketing a bullet.[5] For instance, full metal jacket bullets have different properties, both in terms of behavior inside the barrel of the gun and also in flight. Whereas hollow point and soft-tipped bullets are designed to expand upon impact, full metal jacket bullets are limited in their capacity to expand. This makes the bullet pierce through, in most cases leading to smaller wound size. Hollow point and soft tipped bullets are for use against soft targets only, such as animals or people, whereas full metal jacketed bullets can be indiscriminately used against soft and hard targets.

Some designs of FMJ rifle ammunition inflict more destructive gunshot wounds than others. Not all FMJ bullets contain a simple lead filling. Here are some examples:

Although British Mark 7 .303 ammunition is compliant with the terms of the Hague Convention, it creates more destructive gunshot wounds than standard spitzer bullets due to its internal design. The center of gravity of the Mark 7 bullet is deliberately shifted towards the rear. This is achieved by constructing the front third of the interior of the bullet from a lighter material such as aluminum or wood pulp. The result is a tail-heavy FMJ bullet which yaws violently after hitting the target. The .303 British Mark 7 ammunition has been replaced by the 7.62x51mm NATO. Most 5.45x39mm FMJ ammunition is made with an air space in the tip of the round similarly shifting the weight to the rear causing immediate and violent tumbling when it contacts a soft target. 5.56x45 ammunition traveling at the proper velocity will also tumble and the round will break apart at the cannelure and fragment. 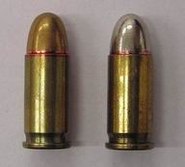