Military Wiki
Register
Don't have an account?
Sign In
Advertisement
in: Articles incorporating text from Wikipedia, Ships of the line of the French Navy, Océan-class ships of the line,
and 2 more

The Orient was an Océan-class 118-gun ship of the line of the French Navy, famous for her role as flagship of the French fleet at the Battle of the Nile in August 1798, and for her spectacular destruction that day when her magazines detonated. The event was commemorated by numerous paintings and poems.

The ship was laid down in Toulon, and launched on 20 July 1791 under the name Dauphin Royal. In September 1792, after the advent of the French First Republic, and not yet commissioned, she was renamed Sans-Culotte, in honour of the Sans-culottes. On 14 March 1795, she took part in the Battle of Genoa as flagship of rear-admiral Martin. She covered the rear of the French line, exchanging fire with HMS Bedford and HMS Egmont, but lost contact with her fleet during the night and was thus prevented from taking further part in the action. In May 1795, Sans-Culotte was again renamed as a consequence of the Thermidorian Reaction, and took her best-known name of Orient. In 1798, Orient was appointed flagship of the squadron tasked with the invasion of Egypt, under Admiral Brueys, with captain Casabianca as his flag officer.[2] Orient also ferried the chiefs of the Armée d'Égypte, notably general Bonaparte. The fleet avoided the British blockade and captured Malta before landing troops in Egypt. Afterwards, it anchored in a bay east of Alexandria, in a purportedly strong defensive position. Nelson's squadron discovered the fleet on 1 August, and he attacked the next day, starting the Battle of the Nile. Nelson had his units sail between the shore and the French ships at anchor, picking them one by one in a cross-fire. Orient eventually came under fire from five ships, caught fire and exploded spectacularly at 22:30.[3]

The number of casualties is disputed: the British reported 70 survivors, reflecting the numbers they rescued aboard their ships, and inferring considerable losses over the 1130-man complement; however, the crew was far from complete at the time of the battle and a number of survivors might have been picked up by French ships. Contre-amiral Decrès reported as many as 760 survivors.[4]

The explosion is also often presented as a turning point of the battle; as a matter of fact, the battle was won by the British when their reinforcements arrived at nightfall, and the interruption of the fighting was brief after the explosion.[4]

The explosion of Orient struck the public of the time, both because of its historical signification and of its spectacular aesthetics. Its romantic load was compounded by the presence aboard of Captain Casabianca's young son, who died in the wreck; this particular detail inspired Felicia Hemans's poem Casabianca:

The boy stood on the burning deck
Whence all but he had fled;
The flame that lit the battle's wreck
Shone round him o'er the dead

Shortly after the battle, Nelson was presented with a coffin carved from a piece of the main mast of Orient, which had been taken back to England for this purpose; he was put inside this coffin after his death at the Battle of Trafalgar.

Depictions of the explosion of the Orient 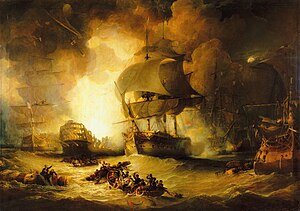 The Destruction of L'Orient at the Battle of the Nile, 1 August 1798, painting by George Arnald, on display at the National Maritime Museum. 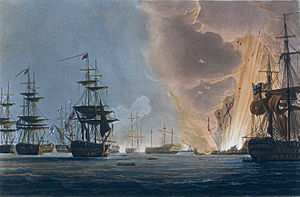 Battle of the Nile, August 1st 1798, painting by Thomas Whitcombe 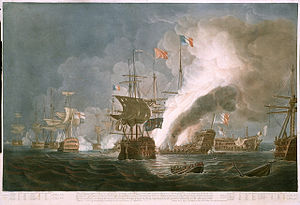 Battle of the Nile, engraving by Thomas Whitcombe

Battle of the Nile, painting by William Lionel Wyllie

Battle of the Nile, painting by Richard Brydges Beechey

Battle of the Nile, painting by Philip James de Loutherbourg

Battle of the Nile, painting by Mather Brown