Military Wiki
Register
Don't have an account?
Sign In
Advertisement
in: Articles incorporating text from Wikipedia, Ships of the line of the French Navy, Ships built in France,
and 2 more

View source
For other ships of the same name, see French ship Duquesne.

The Duquesne was an 80-gun Bucentaure-class 80-gun ship of the line of the French Navy, designed by Sané.

She took part in the Invasion of Algiers in 1830 under captain Bazoche.

After the July Revolution, she was again renamed Zélandais.

On 24 January 1834, she ferried survivors of the wreck of Superbe to Toulon.

The figurehead of Duquesne is on display at the Musée national de la Marine in Paris. An oil painting in Brest naval museum shows Duquesne as a hulk during the fire of the harbour.

Figurehead of Duquesne, on display at the Musée national de la Marine in Paris. 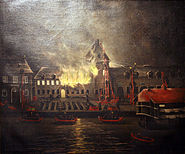