Military Wiki
Register
Don't have an account?
Sign In
Advertisement
in: Articles incorporating text from Wikipedia, Ships of the line of the French Navy, Ships built in France, 1630s ships

View source
watch 01:40
The Sandman Will Keep You Awake - The Loop
Do you like this video?
Play Sound
For other ships of the same name, see French ship Couronne.

The Couronne (French for "crown") was an emblematic ship of the French Navy built by order of Richelieu.

The Couronne was the first major warship to be built by the French themselves in accordance to Richelieu's plans to renew the French Navy, after a series of warships had been built by the Dutch. The construction was supervised by Isaac de Launay Razilly (died in Arcadia 1635),[1] and overseen by the famous carpenter Charles Morieu, from Dieppe. She was being constructed at La Roche-Bernard and was one of the most advanced units of her time. After launch in 1632 or 1633, she was moved to Brouage in September 1634 where she was completed around 1635 by Mathieu Casteau. She carried 68 heavy guns, 8 firing to the bow and 8 to the aft, an unusual feature until Dupuy de Lôme redesigned naval artillery.

The Couronne took part in the Battle of Guetaria in 1638, and another expedition to Spain in 1639 under Henri de Sourdis.

Photograph of a model lost in 1943 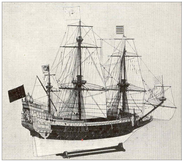