A French ensign is the flag flown at sea to identify a vessel as French. Several such ensigns have existed over the years as well as terrestrial flags based on the ensign motif.

The current French ensign is not, as the casual observer would think, identical to the flag of France. Though both are blue, white and red, the French civil ensign has those colours in the proportion blue 30, white 33, and red 37. The intention is in fact to create a flag which, when seen moving at some distance, will appear to have columns of equal width; in addition, the slightly wider red column is intended to improve the flag's visibility at sea.

The current French ensign, with proportions different from those of the French flag.

As with the ensigns of other countries, the French ensign in the beginning of the 14th century was a banner of the royal arms, blue field with golden French lilies. Sometimes it bears a white cross.

In 1365, Charles V changed to a blue flag with just three golden French lilies. However, reports as late as 1514 still occasionally mention the use of the lilies and cross flag.

Occasionally illustrations from this era also show the white cross, now on a red field, but this is mostly limited to the coats of arms only. After 1450, however, those two designs are often seen flying side by side.

The colours of Bourbon

By the time of the House of Bourbon, the royal colours had merged making blue, red, and white the royal colours; Henry IV of France even had his entire entourage dress in these colours. These colours, for these or other reasons, also became the colours of the French ensigns. A plain white ensign indicated the French sailing fleet, a red flag a galley, while the blue flag was flown by the merchant ships. It's somewhat unclear whether all of these were plain flags. E.g. in 1661 the use of white flags on merchant ships is explicitly forbidden, pointing the merchants instead to the "old flag of the French nation", which then was supposed to be a white cross on blue, with on it the royal arms.

A decade or so later, the rule for the merchant navy was modified, however, to allow every kind of ensign, provided it wasn't all white. This caused two new types of French ensigns: regional or local flags flown as French ensign, and personal designs intended to show as much white as was possible without it being considered all white. 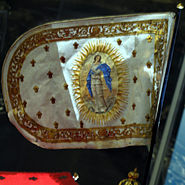 Ensign of the Réale, the prestige galley of Louis XIV.

Standard of the French royal family

The white ensign of the Artésien

Royal Standard of the Kingdom of France

The colours of the Revolution

Until the French Revolution most merchants flew designs composed of blue and white. In 1790, however, the revolution joined all three colours in one flag, and the new ensign became the white flag with a canton of three equal columns of red, white, and blue. Since the white field was too royal for the taste of the revolution, on 27 pluviôse year II of the French Republican Calendar (15 February 1794), the flag and the ensign were changed to the design of the current flag of France: Three columns of equal width, of blue, white, and red. The same banner was again decreed to be the flag on 7 March 1848.

To counter the effect that the fly of an ensign appears to shorten when moving in the wind, the widths of the columns were regulated anew on 17 May 1853, now as 30:33:37.

Portrait of the frigate Incorruptible flying the white flag with a tricolour canton, by Olivier Colin.

On Loutherbourg's the Glorious First of June, the Montagne flies the white flag with a tricolour canton

A number of flags used by French colonies are similar to British ensigns that were adopted by colonies throughout the British Empire except that they use the French tricolour in place of the Union Flag.

The ensign of the Marine nationale differs from the national flag by its slightly darker blue, and by the dimensions of the stripes: while the stripes of the national flag have 1:1:1 proportions, the naval ensign has 30:33:37. These differences were set in the 19th century for optical reasons.

The naval ensign is flown

The dimensions of the ensign depend on the size of the ship, the circumstances (ceremony or regular service) and the position (aft, bowsprit or mast).

The cocarde of aircraft of the French Naval Aviation (Aéronautique navale) differs from the regular cocarde by bearing a black anchor.

The FNFL ensign is flown by the ships which have fought with the Forces Navales Françaises Libres, or by ships named after such ships.

Two ships of the FNFL are still in service, the schoolship schooners Étoile and Belle Poule.

A number of modern ships bear the names of ships which have fought with the FNFL, whether because the names are traditional in the French Navy (Ouragan for instance), or specifically after a particularly significant ship (Aconit for instance). Such ships include

Military award jacks are flown by ships which have received mention in dispatches.

Each jack wear a croix de guerre, of different colors depending of the conflicts during which the mentions are won.

The masthead pennant, called flamme de guerre ("war pennant") indicates a Navy ship with a commissioned commanding officer. If applicable, this pennant is replaced with the jack of a high-ranking officer or a minister aboard,

There is a tradition that when a ship is on mission off France for more than 5 months, she lengthens her masthead pennant by one metre for each month spent away from the homeland. A notable occurrence is the cruiser Georges Leygues which sailed for Dakar on 9 September 1940 and fought with the FNFL, away from German-occupied France, until the Liberation; when she entered Toulon harbour on 13 September 1944, she is said to have flown a 60-metre long masthead pennant.

The following jacks are flown on the masthead if a minister, general officier or division commanding officer are aboard 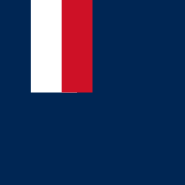 Jack of the Minister of Overseas France

Jack of the Chief of the Defence Staff

Jack of the Chief of Staff of the Navy 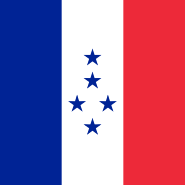 Jack of an admiral 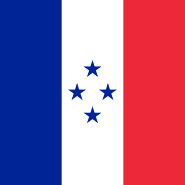 Jack of a Vice-amiral d'escadre

Jack of a contre-amiral

Jack of a capitaine de vaisseau commanding a division

Jack of a capitaine de vaisseau commanding a unit

harbour commanding officer (in NATO operations, the "Starboard" is used)

senior merchant navy officer (if no French warship is present)