Left image: Royal Standard of the Kingdom of France.
Right image: Flag of the United States from 1777 to 1795.

The Franco-American alliance refers to the 1778 alliance between Louis XVI's France and the United States during the American Revolutionary War. Formalized in the 1778 Treaty of Alliance, it was a military pact in which the French provided many supplies for the Americans. The Netherlands and Spain later joined as allies of France; Britain had no allies. The French alliance was possible once the Americans captured a British invasion army at Saratoga in October 1777, demonstrating the viability of the American cause. The alliance became controversial after 1793 when Britain and France again went to war and the U.S. declared itself neutral. Relations between France and the United States worsened as the latter became closer to Britain in the Jay Treaty of 1795, leading to an undeclared Quasi War. The alliance was defunct by 1794 and formally ended in 1800.

France had been left deeply alarmed by the British success in the seven Years War which they feared gave the British naval superiority. From 1763 both France, and their allies Spain, began to rebuild their navies and prepare for a future war in which they would construct an alliance to overwhelm and invade Britain. As Britain's troubles with its American colonies intensified during the 1760s and eventually led to open rebellion in 1775, France began to anticipate the American rebels joining such an alliance. In September 1775 the Continental Congress described foreign assistance as "undoubtedly attainable" and began to seek supplies and assistance from European powers hostile to Britain. The French leadership sought the "humiliation of England" and began giving covert aid to the rebels. The American declaration of independence was advocated by some as necessary in order to secure European support against Britain.[1] Silas Deane, an American envoy in Paris, proposed a major anti-British alliance and French invasions of Hanover and Portugal which were both British allies.[2]

The alliance was promoted in the United States by Thomas Jefferson, a Francophile.[3] Based on the Model Treaty of 1776, Jefferson encouraged the role of France as an economic and military partner to the United States, in order to weaken British influence.[4] In 1776, Latouche Tréville transferred ammunition from France to the United States of America. Numerous French supplies as well as guns of the de Valliere type were used in the American War of Independence, especially the smaller 4-pounder field guns. The guns were shipped from France, and the field carriages provided for in the US. These guns played an important role in such battles as the Battle of Saratoga,[5] and the Siege of Yorktown. George Washington wrote about the supplies and guns in a letter to General Heath on 2 May 1777:

"I was this morning favored with yours containing the pleasing accounts of the late arrivals at Portsmouth and Boston. That of the French ships of war, with artillery and other military stores, is most valuable. It is my intent to have all the arms that were not immediately wanted by the Eastern States, to be removed to Springfield, as a much safer place than Portsmouth …. I shall also write Congress and press the immediate removal of the artillery, and other military stores from Portsmouth. I would also have you forward the twenty-five chests of arms lately arrived from Martinico to Springfield." 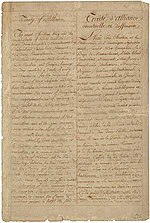 On 13 June 1777, the Marquis de Lafayette reached America and joined George Washington in the Continental Army as Major General. He participated to the Battle of Brandywine where he was wounded, and later served at the Battle of Rhode Island. Lafayette would later return to France during the war in order to advocate more support for the American cause.

The alliance was formally negotiated by Benjamin Franklin and the 1778 Treaty of Alliance was signed on February 6, 1778 after the American victory at the Battle of Saratoga, under the designation of "Franco-American Treaty of Amity and Commerce".[6] The treaty gave open support from the French Army, Navy and Treasury, and spelled that the United States was obligated to guaranty "from the present time and forever, against all other powers (...) the present Possessions of the Crown of France in America", in exchange for a promise not to increase French possessions anymore in America.[6][7]

The combined strength of the Americans and the French virtually guaranteed victory against Great Britain.[8] France successfully supported the American War of Independence, managing to expel the British and obtain recognition of American independence through the intervention of Rochambeau, La Fayette, de Grasse, and Suffren.

Naval conflict started in European waters with the First Battle of Ushant in July 1778, and continued with the attempted invasion of Britain by the Armada of 1779.

In the summer of 1778, French Admiral d'Estaing arrived with a fleet and infantry reinforcements for the war with a fleet of twelve ships of the line and fourteen frigates. After declining to attack Richard Howe's inferior British force outside New York, the French fleet sailed to Rhode Island where they were to take part in an attack on Newport.

In 1780, Rochambeau arrived with a fleet and 6,000 French troops to join the Continental army, under George Washington, in the "Expédition Particulière", landing in Newport, Rhode Island, on 10 July.[9] In the Ohio valley, French Americans would also combine with Indian troops, as in the Battle of Kekionga in 1780 under Augustin de La Balme.[10] The French Navy played a decisive role in supporting the American side, as American forces could hardly resist the powerful British Navy. The French under de Grasse managed to defeat a British fleet at the Battle of the Chesapeake in 1781, thus ensuring that the Franco-American ground forces would win the ongoing Siege of Yorktown, the last major land battle of the Revolutionary War. The British surrendered to American and French forces at Yorktown in 1781.

France continued to fight against the British in the 1782 Antilles War.

France further supported the war effort against Great Britain by attacking British possessions in India. In 1782, Louis XVI sealed an alliance with the Peshwa Madhu Rao Narayan. Suffren became the ally of Hyder Ali in the Second Anglo-Mysore War against British rule in India, in 1782–1783, fighting the British fleet on the coasts of India and Ceylon.[11][12] Between February 1782 until June 1783, Suffren fought the English admiral Sir Edward Hughes, and collaborated with the rulers of Mysore.[12][13] Suffren fought in the Battle of Sadras on February 17, 1782, the Battle of Providien on April 12 near Trincomalee, the Battle of Negapatam (1782) on July 6 off Cuddalore, after which Suffren seized upon the anchorage of Trincomalee compelling the small British garrison to surrender. An army of 3,000 French soldiers collaborated with Hyder Ali to capture Cuddalore. Finally the Battle of Trincomalee took place near that port on September 3. These battles can be seen as the last battles of the Franco-British conflict that encompassed the American War of Independence, and would cease in 1783 with the signature of the 1783 peace treaty.

Finally, the Treaty of Paris was signed on 3 September 1783, recognizing American independence and the end of hostilities.

The 1778 Treaty of Alliance, promising the defense of French territory in the American continent, failed to be observed by the United States as soon as 1793, when France entered in conflict with Great Britain in the Caribbean. All the U.S. could do was maintain neutrality, but this neutrality was so negative as to forbid the French the right to equip and arm privateers in American ports, or the right to dispose of French prizes in the United States. These reluctances in effect marked the end of the alliance.[7]

As the United States entered into a treaty of commerce with Great Britain in 1794, France started to raid American shipping, seizing 316 ships in 1796.[14] In 1796, the disillusioned Minister Pierre Adet explained: "Jefferson (...) is American, and as such, he cannot sincerely be our friend. An American is the born enemy of all the European peoples", and in 1798, the XYZ Affair considerably worsened Franco-American relations.[15][16]

The events led to the Quasi-War (1798–1800) between France and the United States, with actual naval encounters taking place between the two powers, with the encounter between USS Constellation and French ship L'Insurgente on 9 February 1799 off Nevis Island, and USS Constellation and La Vengeance in February 1800 off Guadeloupe.[14] An agreement followed, in which the United States agreed to pay 20 million dollars in compensation, and France agreed to give up its claims to the 1778 Treaty.[14]

Britain would also attempt to interfere with American trade and shipping, starting with the Orders in Council in 1807, which forbade trade with France by Britain, her allies, and any neutral nation, which meant the United States. The US protested that this act was illegal under international law,[17] and this act was a contributory factor to the enmity between the US and Britain which caused the War of 1812.

Charles Gravier, comte de Vergennes appeared ready to offer official treaty negotiations, as long as the Americans promised to remain independent. Because they had consistently maintained the nonnegotiability of independence, Vergennes’s demand proved that their strategy to threaten reunion with Britain influenced France’s thinking. It also demonstrates that the victory at Saratoga played little role in the calculations of American, French, and British diplomats. Indeed, two more months of diplomacy would pass before the signing of the Franco-American treaty.[18]

French commanders in the alliance