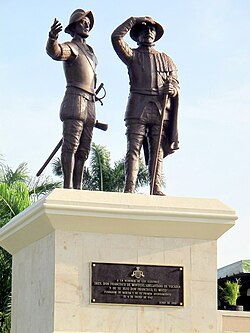 Francisco de Montejo was born in 1479 in Salamanca, Spain, to Juan de Montejo and Catalina Álvarez de Tejeda. He left Spain in 1514, and arrived in Cuba in time to join Juan de Grijalva's expedition along the coast of Yucatán and the Gulf of Mexico.[1]:27 There he had the rank of Captain, and command of 4 ships. On his return to Cuba, he joined the Hernán Cortés expedition, and helped found the city of Villa Rica de la Vera Cruz with Alonso Hernandez Puertocarrero.[1]:54,95,102 Cortés sent Francisco and Alonso as proctors to King Charles of Spain in 1519 to report on the expedition.[1]:127–128 While in Spain Montejo married Beatriz de Herrera.

In December 1526 the Spanish King, Charles V, Holy Roman Emperor, issued a royal decree naming Montejo Adelantado and Capitan General of Yucatán. He returned to Yucatán in 1528, and attempted to conquer it along the east coast (Tulum, Chetumal) but was driven back by the ferocity of the resistance of the Maya living along this coast. In 1530 he decided to try conquering Yucatán from the west, and began by pacifying what is today the modern Mexican state of Tabasco. From 1531–1535 he tried unsuccessfully to conquer western Yucatán, with some successes but in 1535 his forces were driven from Yucatán. In 1533, Montejo received a royal decree giving him permission to conquer Puerto Caballos and Naco in Honduras. This put him in conflict with Pedro de Alvarado, who had received a similar decree in 1532. This only became an issue after Alvarado declared he had conquered and pacified the province of Honduras in 1536. Alvarado continued as Governor of Honduras until 1540, although he was recalled to Spain in 1537.

In 1540, the Spanish King awarded the Governorship of Honduras to Montejo, and he traveled to Gracias a Dios to install an administration loyal to him.

Montejo was survived by his eponymous son, and a daughter, Catalina Montejo y Herrera.