A four-star rank is the rank of any four-star officer described by the NATO OF-9 code. Four-star officers are often the most senior commanders in the armed services, having ranks such as (full) admiral, (full) general, or (in the case of air forces with a separate rank structure) air chief marshal. This designation is also used by some armed forces that are not NATO members. 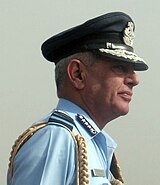 The four-star rank is reserved in Australia for the Chief of the Defence Force, the highest position in peace time.

In times of major conflict, the highest ranks are the five-star ranks: admiral of the fleet, field marshal, and marshal of the Royal Australian Air Force.

Four maple leaves appear with St. Edward's crown and crossed sabre and baton on epaulettes and shoulder boards. In Canada and when referring to Canadian officers, it is sometimes referred to as the "4-leaf" rank, rather than "four-star".[citation needed]

This is the highest rank that is defined in the Canadian Forces under the current National Defence Act Schedule.[2] Usually, only one officer carries the rank of full admiral or general at any one time: the Chief of the Defence Staff. In exceptional circumstances, from time-to-time, the minister may authorize additional officers at that level, for instance, Canadian officers in the position of Chairman of the NATO Military Committee are usually former Chiefs of the Defence Staff seconded to NATO for that duty.

Before unification in 1968, the rank of air chief marshal was the four-star equivalent for the Royal Canadian Air Force.