Fort William is a fort built in Calcutta on the Eastern banks of the River Hooghly, the major distributary of the River Ganges, during the early years of the Bengal Presidency of British India. It was named after King William III of England and Ireland and II of Scotland.[1] In front of the Fort is the Maidan, which used to be a part of the Fort and is the largest urban park in Calcutta.

There are actually two Forts William, the old and the new. The original was built in 1696 by the British East India Company under the supervision of John Goldsborough. Sir Charles Eyre started construction near the bank of the River Hooghly with the South-East Bastion and the adjacent walls. It was named after King William III in 1700. John Beard, his successor, added the North-East Bastion in 1701, and in 1702 started the construction of the Government House (Factory) at the centre of the fort. Construction ended in 1706. The original building had two stories and projecting wings. An internal guard room became the Black Hole of Calcutta.

In 1756, the Nawab of Bengal, Siraj Ud Daulah, attacked the Fort, temporarily conquered the city, and changed its name to Alinagar. This led the British to build a new fort in the Maidan.

The rebuilding of the fort was started by Robert Clive in 1758, after the Battle of Plassey (1757), and completed in 1781 at a cost of approximately two million pounds. The area around the Fort was cleared, and the Maidan became "the Lungs of Kolkata". It stretches for around 3 km in the north-south direction and is around 1 km wide.Fort William is one of Kolkata's most enduring Raj era edifice. This is a fort of stupendous dimensions and is spread over an area of 70.9 hectares. It was built by Robert Clive in the year 1781. Fort William has the dubious distinction of being the only fort in the world from which not a single shot was fired.[citation needed]

Today this fort located in the periphery of the lush green Maidan is the property of Indian Army. The headquarters of Eastern Command is based at Fort William and it has provisions for accommodating 10,000 army personnel. Much of Fort William is unchanged except for the fact that the St. Peter's Church which used to serve as a chaplaincy center for the British citizens of Kolkata is now a library for the troops of HQ Eastern Command.

For the welfare and relaxation of the 10,000 odd military personnel who are residents of Fort William, the army has provided every kind of facilities within the Fort premises like the emerald blue swimming pool, cinema hall, shopping mall, laundry, outdoor playground, restaurants and even a post office.

The New Fort is still in use as the headquarters of the Eastern Command of the Indian Army. The Army guards it heavily, and civilian entry is restricted.

The Fort is built of brick and mortar in the shape of an irregular octagon with an area 5 km². Five of its sides face landward, and three towards the Hooghly River. The design is that of a star fort, suited to defence against cannon, but from before the advent of explosive shells. It is surrounded by a dry moat 9 m deep and 15 m broad, which can be flooded but is designed as an area in which to use enfilade (or "flanking") fire against any attackers reaching the walls. There are six gates: Chowringhee, Plassey Calcutta, Water Gate St Georges and the Treasury Gate. There are similar forts at places like Thalassery in Kerala.[2] It has 9-hole golf course. 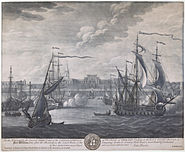 The interior of the Arsenal, Fort William by William Prinsep 1835