Military Wiki
Register
Don't have an account?
Sign In
Advertisement
in: Articles incorporating text from Wikipedia, National Historic Landmarks in Texas, Forts in Texas,
and 5 more

From 1854 to 1891, Fort Davis was strategically located to protect emigrants, mail coaches, and freight wagons on the Trans-Pecos portion of the San Antonio-El Paso Road and the Chihuahua Trail, and to control activities on the southern stem of the Great Comanche War Trail and Mescalero Apache war trails. During the Civil War, Confederate States Army troops manned the fort which was attacked on August 9, 1861 by Mescalero Apaches. The native warriors attacked the garrison's livestock herd, killed two guards and made off with about 100 horses and or cattle. Fort Davis is important in understanding the presence of African Americans in the West and in the frontier military because the 24th and 25th U.S. Infantry and the 9th and 10th U.S. Cavalry, all-black regiments (known as the Buffalo Soldiers), which were established after the American Civil War, were stationed at the post.

Other forts in the frontier fort system were Forts Griffin, Concho, Belknap, Chadbourne, Fort Stockton, Richardson, Fort Bliss, McKavett, Clark, Fort McIntosh, Fort Inge and Phantom Hill in Texas, and Fort Sill in Oklahoma.[2] There were "sub posts or intermediate stations" including Bothwick's Station on Salt Creek between Fort Richardson and Fort Belknap, Camp Wichita near Buffalo Springs between Fort Richardson and Red River Station, and Mountain Pass between Fort Concho and Fort Griffin.[3] Today, 24 restored historic buildings and over 100 ruins and foundations are part of Fort Davis National Historic Site. Five of the historic buildings have been refurnished to the 1880s, making it easy for visitors to envision themselves being at the fort at the height of its development. A self-guided tour of the fort begins at the site's visitor center. Living history demonstrations are common during the summer months. 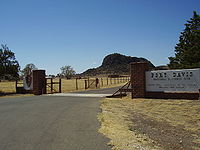 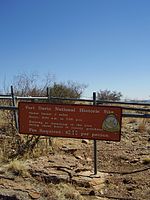 Entrance to the Fort Davis National Historic Site from the Davis Mountains State Park
FortDavisCampaignMap.jpg
Fort Davis Campaign Map
A hand drawn military map from the 1880 campaign against Victorio and his Chiricahua Apaches. Image from the Special Collections of The University of Texas at Arlington Library.