The First Serbian Uprising (Serbian language: Први српски устанак, Prvi srpski ustanak) was the first stage of the Serbian Revolution (Српска револуција), the successful wars of independence that lasted for 9 years and approximately 9 months (1804–1813), during which Serbia perceived itself as an independent state for the first time after more than three centuries of Ottoman rule and short-lasting Austrian occupations.

After Serbia had fallen to the Ottoman Empire in 1459, several uprisings were organized by the Serbs; the Banat uprising, Kočina Krajina uprising etc. but greater political independence of Serbs was established briefly by Jovan Nenad and Voivode Radoslav 1526-1530, and in Montenegro a unique autonomy was established as the mountainous regions were governed by voivodes.

After the Slaughter of the knezes, the Serbs responded by establishing its separate government (Правитељствујушчи Совјет, Praviteljstvujušči Sovjet), Parliament (Збор, Zbor) and the oldest and largest Serbian University of Belgrade, with Grand Vožd Karađorđe as leader. Even though it was crushed by the Ottomans in 1813, this revolution sparked the Second Serbian Uprising in 1815, which resulted with the creation of the Principality of Serbia, as it gained semi-independence from Ottoman Empire in 1817 (formally in 1829).

When the Austro-Turkish War (1787–1791) ended with the return of the Belgrade Pashaluk to the Ottoman Empire the Serbs expected reprisals from the Turks due to their support for the Austrians. Sultan Selim III had given complete command of the Sanjak of Smederevo and Belgrade to battle-hardened Janissaries that had fought Christian forces during the previous Austro-Turkish War (1787–1791) and many other conflicts. Although Sultan Selim III granted authority to the peaceful Hadži Mustafa Pasha, however tensions between the Serbs and the Janissary command did not subside.[1]

Selim III proclaimed fermans in 1793 and 1796 which gave more rights to Serbs. Among other things, taxes were to be collected by local Serbian rulers called knezes ("local dukes"), freedom of trade and religion were granted. Selim also decreed that some unpopular Janissaries were to leave the Belgrade Pashaluk as he saw them as a threat to central authority of Hadži Mustafa Pasha.[2] Many of those Janissaries were employed by or found refuge with Osman Pazvantoğlu, a renegade opponent of the Sultan in Bulgaria. Fearing the dissolution of the Janissary command in Sanjak of Smederevo, Osman Pazvantoğlu launched a series of raids against Serbian brigands without the permission of Sultan Selim III causing much volatility and fear in the region.[3]

However, on January 30, 1799, the Sultan Selim III court allowed the Janissaries to return, referring to them as local Muslims from the Sanjak of Smederevo. Initially the Janisaries accepted the authority of the Belgrade Pasha under Hadži Mustafa Pasha. Until a Janissary in Šabac, named Bego Novljanin, demanded from a Serb a surcharge and murdered the Serb when he refused to pay. Fearing the worst Hadži Mustafa Pasha, marched on Šabac with a force of 600 to ensure that the Janissary was brought to justice and order was restored. Not only did the other Janisaries decided to support Bego Novljanin but Osman Pazvantoğlu attacked the Belgrade Pasahaluk in support of the Janisaries.[4] After killing Vizier Hadži-Mustafa Pasha (nicknamed "Serbian Mother" due to his tolerant stance towards Serbs) of Belgrade in 1801, they started to rule Serbia on their own. Recently-granted rights were suspended, and four Dahias (leaders of Janisaries): Aganli, Kuchuk Ali, Mula Yusuf and Mehmet-Ağa Fotcić exerted unlimited rule over Belgrade Pashaluk. Taxes were drastically increased, land was seized, forced labour (čitlučenje) was introduced, and many Serbs fled the Janissaries in fear.

Serb leaders began to conspire about starting an uprising against the dahijas. When the dahijas found out about this, they captured and killed many of the Serbian leaders on February 4, 1804 in an event known today as the Slaughter of the knezes. This action by the Janissaries incited the uprising, as it angered the people and the leaders had nothing to lose.

On February 14, 1804, in the small Šumadija village of Orašac, nearby modern Aranđelovac, in Marićevića jaruga, the Serbs gathered and decided to undertake an uprising. Karađorđe Petrović was elected as the leader of the uprising, which started immediately. That afternoon, a Turkish inn (caravanserai) in Orašac was burned and its residents fled or were killed. Similar actions were undertaken in surrounding villages and then spread further. On 11 March rebels captured Rudnik, which was under control of Sali Aga, and then Valjevo, Požarevac, and started the siege of Belgrade. At this stage the Serbs were acting in the name of the Sultan and on the 12 March the Sultan issued a fermans ordering all to support the uprising against the Dahias.[5] The Dahias fled from Belgrade, abandoning their followers, but they were captured on Ada Kaleh island on the Danube by 40 uprisers led by Milenko Stojković with knowledge and approval of the Ottoman authorities and executed.[6] With the success of the uprising, Selim III started to negotiate with the rebels.

Breakdown in Relations between the Serbs and the Sultan

Eventually, the negotiations failed, and the Sultan organised a military campaign against the uprising. The first major battle of the uprising was the Battle of Ivankovac in 1805, where Karađorđe defeated the Turkish army and forced it to retreat toward Niš. The second major battle of the uprising was Battle of Mišar in 1806, in which the rebels defeated an Ottoman army from the Eyalet of Bosnia led by the Turkish Sipahi Suleiman-Pasa. At the same time, the rebels led by Petar Dobrnjac defeated Osman Pazvantoğlu and another Ottoman army sent from the south-east in the Battle of Deligrad. The Ottomans continuously faced defeat despite their continuous efforts and support by Ottoman commanders led by Ibrahim Bushati and Ali Pasha's two sons Muktar Pasha and Veil Pasha.[7][8] . In December 1806, the Serbian rebels besieged Belgrade and the Ottomans dispatched kapetan Mehmed-beg Kulenović of Zvornik to relieve the siege but this attempt ended in a devastating defeat and Belgrade was taken in the spring of the year 1807. Mehmed-beg Kulenović of Zvornik later made efforts to drive the Serbian rebels out of the western districts but was killed in battle.

In 1806 the insurgents sent the Belgrade merchant Petar Ičko as their envoy to Ottoman government in Constantinople. He managed to obtain for them a favourable Ičko's Peace. However, the Serbian leaders preferred to reject the treaty and possibly poisoned Petar Ičko due to his acquaintance with the Ottomans. The Serbian rebels then joined the Russians as their allies in Russo-Turkish War (1806–1812).

In 1805 the Serbian rebels organized a basic government for administering Serbia during the combat. Rule was divided between the Narodna Skupština (People's Assembly), the Praviteljstvujušči Sovjet (Ruling Council), and Karađorđe himself. Land was returned, forced labour was abolished, and taxes were reduced. The young state was modernised and by 1808 the Belgrade Higher School was founded, regarded as the foundation of the University of Belgrade.

Some of the leaders of the uprising later abused their privileges for personal gain, such as the reintroduction of forced labour in some places. There was dissent between Karađorđe and other leaders; Karađorđe wanted absolute power, while his voivods wanted to limit it. After the Russo-Turkish War of 1806-12 ended, the Ottoman Empire exploited these circumstances and reconquered Serbia in 1813.

The then Grand Vizier Hurşid Paşa and a substantially large and well organized Ottoman army successfully swept through the territories held by the Serbian rebels. The diverse Ottoman force included vast numbers of soldiers from many nearby Pashaliks including servicemen such as Samson Cerfberr of Medelsheim, Osman Gradaščević and Reshiti Bushati. By the end of the year 1813 the Serbian rebels were ultimately defeated and Belgrade was retaken by the forces loyal to Sultan Selim III. The majority of troops who participated in devastation of Serbia were from the territory of Albania and Bosnia.[9] They burned down villages along main invading routes while their inhabitants were massacred or made refugee with many women and children being enslaved.[9]

Serbia in 1809, during the First Serbian Uprising

Serbia in 1813, during the First Serbian Uprising 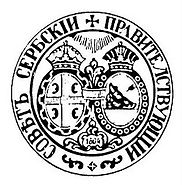