Fatehpur Sikri (Hindi language: फ़तेहपुर सीकरी, Urdu language: فتحپور سیکری‎ ) is a city and a municipal board in Agra district in the state of Uttar Pradesh, India. The city was founded in 1569 by the Mughal emperor Akbar, and served as the capital of the Mughal Empire from 1571 to 1585.[1] After his military victories over Chittor and Ranthambore, Akbar decided to shift his capital from Agra to a new location 23 miles (37 km) W.S.W on the Sikri ridge, to honor the Sufi saint Salim Chishti. Here he commenced the construction of a planned walled city which took the next fifteen years in planning and construction of a series of royal palaces, harem, courts, a mosque, private quarters and other utility buildings.[2] He named the city, Fatehabad, with Fateh, a word of Arabic origin in Persian, meaning "victorious." it was later called Fatehpur Sikri.[3] It is at Fatehpur Sikri that the legends of Akbar and his famed courtiers, the nine jewels or Navaratnas, were born.[citation needed] Fatehpur Sikri is one of the best preserved collections of Indian Mughal architecture in India.[4]

According to contemporary historians, Akbar took a great interest in the building of Fatehpur Sikri and probably also dictated its architectural style. Seeking to revive the splendours of Persian court ceremonial made famous by his ancestor Timur, Akbar planned the complex on Persian principles. But the influences of his adopted land came through in the typically Indian embellishments. The easy availability of sandstone in the neighbouring areas of Fatehpur Sikri, also meant that all the buildings here were made of the red stone. The imperial Palace complex consists of a number of independent pavilions arranged in formal geometry on a piece of level ground, a pattern derived from Arab and central Asian tent encampments. In its entirety, the monuments at Fatehpur Sikri thus reflect the genius of Akbar in assimilating diverse regional architectural influences within a holistic style that was uniquely his own.[5]

The Imperial complex was abandoned in 1585, shortly after its completion, due to paucity of water and its proximity with the Rajputana areas in the North-West, which were increasingly in turmoil. Thus the capital was shifted to Lahore so that Akbar could have a base in the less stable part of the empire, before moving back to Agra in 1598, where he had begun his reign as he shifted his focus to Deccan.[6] In fact, he never returned to the city except for a brief period in 1601.[7][8] In later Mughal history it was occupied for a short while by Mughal emperor, Muhammad Shah (r. 1719 -1748), and his regent, Sayyid Hussain Ali Khan Barha, one of the Syed Brothers, was murdered here in 1720. Today much of the imperial complex which spread over nearly two mile long and one mile wide area is largely intact and resembles a ghost town. It is still surrounded by a five mile long wall built during its original construction, on three sides. However apart from the imperial buildings complex few other buildings stand in the area, which is mostly barren, except of ruins of the bazaars of the old city near the Naubat Khana, the 'drum-house' entrance at Agra Road. The modern town lies at the western end of the complex, which was a municipality from 1865 to 1904, and later made a "notified area", and in 1901 had a population of 7,147. For a long time it was still known for its masons and stone carvers, though in Akbar time it was known and 'fabrics of hair' and 'silk-spinning'. The village of Sikri still exists nearby.[1]

Fatehpur Sikri sits on rocky ridge, 3 kilometres (1.9 mi) in length and 1 km (0.62 mi) wide, and palace city is surrounded by a 6 km (3.7 mi)[4] wall on three side with the fourth being a lake at the time.[9] Its architect was Tuhir Das and was constructed using Indian principles. The buildings of Fatehpur Sikri show a synthesis of various regional schools of architectural craftsmanship such as Gujarat and Bengal. This was because indigenous craftsmen were used for the construction of the buildings.[citation needed] Influences from Hindu and Jain architecture are seen hand in hand with Islamic elements. The building material used in all the buildings at Fatehpur Sikri, palace-city complex, is the locally quarried red sandstone, known as 'Sikri sandstone'.[10][11] It is accessed through gates along the five-mile long fort wall, namely, Delhi Gate, the Lal Gate, the Agra Gate, Birbal's Gate, Chandanpal Gate, The Gwalior Gate, the Tehra Gate, the Chor Gate and the Ajmere Gate.[12]

Some of the important buildings in this city, both religious and secular are:

Recent excavation done by ASI in 2000 led to unearthing of an ancient jain city very near to the fort coimplex.[21]

Fatehpur Sikri is one of the fifteen Block headquarters in the Agra district[22] it has 52 Gram panchayats (Village Panchayat) under it.[23]

The Fatehpur Sikri, is a constituency of the Lok Sabha, Lower house of the Indian Parliament, and further comprises five Vidhan Sabha (legislative assembly) segments:[24]

Fatehpur Sikri is about 39 km. from Agra. The nearest Airport is the Agra Airport (also known as Kheria Airport), 40 km from Fatehpur Sikri. The nearest railway station is the Fatehpur Sikri Railway Station, about one km. from the city centre . It is suitably connected to Agra and neighbouring centres by road, where regular bus services of UPSRTC ply, apart from Tourist buses and taxies.[25] 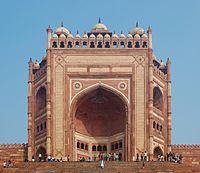 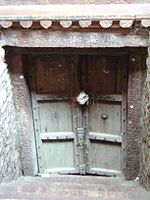 Anup talao (pond), the platform in the middle was used for singing competitions