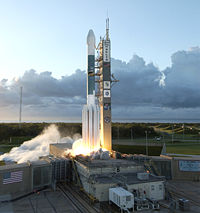 The ELV design differs from that of reusable launch systems, where the vehicle is launched and recovered more than once. Reuse might seem to make systems like the Space Shuttle more cost effective than ELVs, but in practice launches using ELVs have been less expensive than Shuttle launches. (See Space Shuttle Program and Criticism of the Space Shuttle program for discussion of Space Shuttle economics.) Most satellites are currently launched using expendable launchers; they are perceived as having a low risk of mission failure, a short time to launch and a relatively low cost.[according to whom?]

Many orbital expendable launchers are derivatives of 1950s-era ballistic missiles. As such, cost was not a major consideration in their design. A prime example of this is the Titan IV, the costliest per-unit launch vehicle in history (following the Space Shuttle).

On the other hand, a reusable launcher such as the Shuttle requires a heavier structure and a recovery system (wings, thermal protection system, wheels, etc.) that reduce payload capacity. The Shuttle additionally carried a crew (though not inherent to a reusable system) whose weight, supplies and life support systems further decrease payload capacity.

The Space Shuttle was a major national asset, and its high cost (far more than a single expendable launch vehicle) and presence of a crew require stringent "man rated" flight safety precautions that increased launch and payload costs. Only five orbiters were built, and the loss of two (Challenger and Columbia) significantly impacted the capacity and viability of the Shuttle program. Each loss also resulted in an extended hiatus in Shuttle flights compared to that following most expendable launch failures, each of which impacted only that model of launcher.

For these reasons it is generally[according to whom?] agreed that the Space Shuttle did not deliver on its original promise to reduce the costs of constructing and launching payloads into orbit. The Shuttle was originally intended to replace expendable launchers in the launching of satellites, but after the loss of Challenger the Shuttle was reserved for previously planned missions and those requiring a crew.

On March 26, 1980, the European Space Agency and the Centre National d'Etudes Spatiales (CNES) created Arianespace, the world's first commercial space transportation company. Arianespace produces, operates and markets the Ariane launcher family. By 1995 Arianespace lofted its 100th satellite and by 1997 the Ariane rocket had its 100th launch.[1] Arianespace's 23 shareholders represent scientific, technical, financial and political entities from 10 different European countries. The major shareholder is the CNES, with 34.68% of capital.[2]

From the beginning of the Shuttle program until the Challenger disaster in 1986, it was the policy of the United States that NASA be the public-sector provider of U.S. launch capacity to the world market.[3] Initially NASA subsidized satellite launches with the intention of eventually pricing Shuttle service for the commercial market at long-run marginal cost.[citation needed]

On October 30, 1984, United States President Ronald Reagan signed into law the Commercial Space Launch Act.[4] This enabled an American industry of private operators of expendable launch systems. Prior to the signing of this law, all commercial satellite launches in the United States were limited to NASA's Space Shuttle.[citation needed]

On November 5, 1990, United States President George H. W. Bush signed into law the Launch Services Purchase Act.[5] The Act, in a complete reversal of the earlier Space Shuttle monopoly, requires NASA to purchase launch services for its primary payloads from commercial providers whenever such services are required in the course of its activities.

In 1996 the United States government selected Lockheed Martin and Boeing to each develop Evolved Expendable Launch Vehicles (EELV) to compete for launch contracts and provide assured access to space. The government's acquisition strategy relied on the strong commercial viability of both vehicles to lower unit costs. This anticipated market demand did not materialize, but both the Delta IV and Atlas V EELVs remain in active service.

Beginning in 2013, the Russian government began a renationalization of the Russian space sector. Among the actions taken was the formation of the United Rocket and Space Corporation (Russian: Объединенная ракетно-космическая корпорация) to consolidate a large number of disparate companies and bureaus.[6][7] The efforts have continued into 2014.[8] On 19 May 2015 State Duma passed a bill on a creation of Roscosmos State Corporation, further consolidating the industry.[9]