The Eurocopter EC 725 Caracal (also named Super Cougar) is a long-range tactical transport helicopter developed from the Super Puma/Cougar family for military use. It is a twin-engined aircraft and can carry up to 29 seated troops along with two crew, depending on customer configuration. The helicopter is marketed for troop transport, casualty evacuation, and combat search and rescue duties, and is similar to the civilian EC 225.

The EC 725 was developed to meet a French Air Force requirement for a specialist helicopter for Combat Search & Rescue operations after the AS 532 A2 Cougar model was rejected for this purpose following extensive trials between 1996 and 1999. The more ambitious EC 725 design made its maiden flight at Marignane on the 27 November 2000 and the machine made its first presentation on the 15 January 2001. The French Air Force subsequently ordered 6 for Combat Search & Rescue duties with the first being delivered in February 2005. Eight more helicopters were ordered for the French Armed Forces in November 2002.[2] Indonesian Aerospace (PT. Dirgantara Indonesia/PTDI) also takes part in the development of EC 725. Based on the original design and license from Eurocopter, Indonesian Aerospace is currently developing 6 units for Indonesian Armed Forces which are scheduled to be delivered in 2014.

The EC 725 is based on the Eurocopter AS 532 Cougar, improving upon the design with a five-blade composite main rotor incorporating a new airfoil shape to reduce vibration levels. The helicopter can be fitted with removable armour plating to protect the troops and is powered by two Turbomeca Makila 1A4 turboshaft engines mounted over the cabin, which feature a dual-channel Full Authority Digital Engine Control (FADEC) system. They can be fitted with an anti-icing system to enable the aircraft to operate in very cold climates. Other improvements include a reinforced main rotor gearbox and an all glass cockpit. The cockpit is equipped with an integrated display system featuring a digital map and Active Matrix Liquid Crystal Displays.

The helicopter has day and night time search and rescue capabilities by way of a search radar and Forward Looking Infra Red (FLIR).

There are currently four configurations designed by Eurocopter for the EC 725. The Troop Transport version has seating arrangements for a maximum of 29 troops in addition to the crew. The VIP Transport version can carry between 8 to 12 passengers. The Casualty Evacuation version can carry up to 12 stretchers with four seated medical staff, and the Combat SAR configuration is fully equipped for search and rescue duties in a combat environment.

The EC 725 can be fitted with the following military equipment and armaments:

The Brazilian Government has announced that the Helibras factory in Itajubá, Minas Gerais, will produce, initially, 50 units of the Caracal (EC 725).[3] Three helicopters were test-flown in December 2010 and are already in service in the military forces. Helibras plans to begin assembling the other helicopters in 2012.[4] 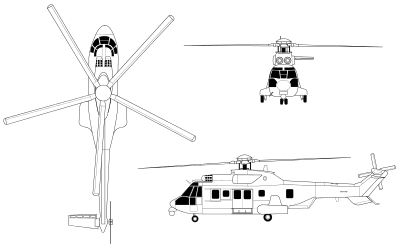