Eugène Rose de Beauharnais (3 September 1781 – 21 February 1824), was the first child and only son of Alexandre de Beauharnais and Joséphine Tascher de la Pagerie, future wife of Napoleon I. He was born in Paris, France and became the stepson and adopted child (but not the heir to the imperial throne) of Napoleon I. His biological father was executed during the revolutionary Reign of Terror. He commanded the Army of Italy and was Viceroy of Italy under his stepfather.

Historians have looked upon him as one of the ablest of Napoleon's relatives.[1]

Eugène's first campaign was in the Vendée, where he fought at Quiberon. However, within a year his mother Joséphine had arranged his return to Paris. In the Italian campaigns of 1796–1797, Eugène served as aide-de-camp to his stepfather, whom he also accompanied to Egypt. In Egypt, Eugène was wounded during the Siege of Acre (1799). He returned to France in the autumn of 1799 and helped bring about the reconciliation between Bonaparte and his mother, who had become estranged due to the extramarital affairs of both. When Napoleon became First Consul, Eugène became a captain in the Chasseurs à Cheval of the Consular Guard. With his squadron he took part in the Battle of Marengo.

During the War of the Fifth Coalition, Eugène was put in command of the Army of Italy, with General Étienne-Jacques-Joseph-Alexandre MacDonald as his military advisor. In April 1809 he fought and lost the Battle of Sacile against the Austrian army of the Archduke John, but Eugène's troops decisively won the rematch at the Battle of Raab that June. After the Battle of Aspern-Essling, Napoleon recalled the Army of Italy to Austria. After joining the main army on the island of Lobau in the Danube, Eugène took part in the Battle of Wagram.

During the Russian campaign, Eugène again commanded the Army of Italy (IV Corps) with which he fought in the Battle of Borodino and the Battle of Maloyaroslavets. After Napoleon and then Joachim Murat had left the retreating army, Eugène took command of the remnants and led it back to Germany in 1813.

During the campaign of 1813, Eugène fought in the Battle of Lützen. Napoleon then sent him back to Italy, where he organised the defence against the Austrians, holding out on the Mincio until the abdication in 1814. After the fall of Napoleon in 1814, Eugène retired to Munich and at the behest of his father-in-law King Maximilian of Bavaria, did not get involved with Napoleon and France again.

In 14 June 1804 he was made an official member of the imperial family as His Imperial Highness, French Prince (Prince français) Eugène de Beauharnais. By a statute of 5 June 1805 the Emperor added Viceroy of Italy to his titles. Prince Eugène was adopted by Napoleon on 12 January 1806, though excluded from succession to the French Empire. On 16 February 1806, Eugent was declared heir presumptive to the Kingdom of Italy, in the absence of a second son of Napoleo. On 20 December 1807 he was given the title of Prince de Venise ("Prince of Venice"), a title created on 30 March 1806, when the Venetian Province taken from Austria in 1805 was united to Bonaparte's Kingdom of Italy. In 1810, his stepfather also made him heir to the Grand Duchy of Frankfurt, held by Karl von Dalberg, Archbishop of Regensburg. Hence when the Archbishop abdicated as Duke in 1813, Eugene technically succeeded. This position, however, was purely theoretical, as the abdication was due to the Grand Duchy's imminent conquest by the Allied armies.

A further imperial sinecure was Archichancelier d'Etat de l'Empire de France ("Archchancellor of State of the Empire of France").

He was an active Freemason and was involved in setting up the Grand Orient of Italy and its Supreme Council.[2] 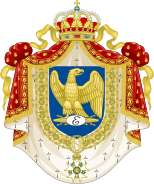 Coat of arms as
French Prince

On 14 January 1806, two days after his adoption by Napoleon, Eugène married Princess Augusta Amalia Ludovika Georgia of Bavaria (1788–1851), eldest daughter of Napoleon's ally, King Maximilian I Joseph of Bavaria. On 14 November 1817, his father-in-law made him Duke of Leuchtenberg and Prince of Eichstätt.

Eugène and Augusta had seven children: