The Douglas XCG-17 was an American assault glider, developed by the conversion of a C-47 Skytrain twin-engine transport during World War II. Although the XCG-17 was successful in testing, the requirement for such a large glider had passed, and no further examples of the type were built; one additional C-47, however, was converted in the field to glider configuration briefly during 1946 for evaluation, but was quickly reconverted to powered configuration.

With the introduction of the Douglas C-54 Skymaster four-engined transport aircraft, the United States Army Air Forces, observing that conventional gliders then in service[N 1] would be an inefficient use of the C-54's power and capacity, determined that a requirement existed for a new, much larger assault glider.[2][3] It was determined that the best solution to the requirement was the conversion of the Douglas C-47 Skytrain, already in large-scale production, to meet the requirement. The C-47 could be converted to a glider configuration with minimal alteration to the airframe, and would provide the required capacity.[3] Trials conducted using a conventional, powered C-47, first conducting ordinary deadstick landings, then being towed by another C-47, indicated that the scheme was feasible.[2] Therefore, a C-47-DL was taken in hand for conversion into a glider, which was given the designation XCG-17.[4][5][N 2] The aircraft, formerly a Northwest Airlines DC-3 that had been impressed into military service at the start of World War II,[7][N 3] was modified by the removal of the aircraft's engines; the nacelles, containing the landing gear, remained in place, covered with aerodynamically profiled hemispherical domes for streamlining, containing fixed weight to compensate for the removal of the engines.[3][7][9] Other equipment, no longer necessary with the conversion to an unpowered configuration, was also removed to save weight;[3] items removed included the aircraft's wiring and bulkheads, along with the navigator's and radio operator's positions.[1][7]

The conversion, carried out at Clinton County Army Air Field, was completed on June 12, 1944, with the aircraft undergoing its initial flight test shortly thereafter.[7] The flight testing of the XCG-17 proved that the aircraft was satisfactory; compared to conventional gliders in service, the aircraft possessed lower stalling and higher towing speeds than conventional gliders, as well as gliding at a significantly shallower angle.[4][10] Tow tests were conducted using a variety of aircraft; the most commonly used configuration was a tandem tow by two C-47s, with the towing aircraft coupled in tandem and the leading aircraft detaching following takeoff.[3] This configuration was dangerous for the "middle" C-47, however,[7] and it was determined that a single C-54 was the optimal tug aircraft.[2][7]

The XCG-17's cargo hold had a capacity of 15,000 pounds (6,800 kg);[1][7][9] alternatively, up to 40 fully equipped troops could be transported, these figures being significantly larger than conventional gliders' capacity.[3] The XCG-17 was also capable of carrying three jeeps in a single load, or alternatively two 105-millimetre (4.1 in) howitzers.[7] Regardless of the aircraft's load, no ballast was required to maintain the aircraft's center of gravity,[3] a trait unique among American assault gliders.[7]

Despite the satisfactory results in testing, however, the aircraft failed the Army's requirement that it be capable of landing on unimproved fields;[7] in addition, by the time the evaluation of the XCG-17 was completed the need for such a large assault glider had passed.[1][9] The primary role for the glider had been intended to increase the amount of supplies that could be carried to China over "The Hump"; the war situation had, however, become more favorable and the added capacity an oversized glider would provide was no longer required.[11] No further examples of the type were produced; the prototype, its trials complete, was placed in storage, being ferried to Davis-Monthan Air Force Base for disposal in August 1946.[7] 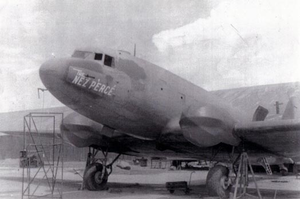 |} Although the XCG-17 failed to lead to any production of a C-47 derived glider type, a single C-47 was converted in the field to a glider configuration by the Fifth Air Service Area Command, located at Nichols Field on Luzon in the Philippines, during January 1946.[7] Carried out in much the same manner as the XCG-17, the conversion included octagonally shaped fairings over the engine mountings, with an auxiliary power unit from a B-24 Liberator bomber being installed.[7]

Referred to as "XCG-47" as well as "XCG-17", and named "Nez Perce",[7] the aircraft undertook its initial flight following conversion on June 17, 1946, towed by a C-54.[7] The flight tests of the field-converted aircraft proved favourable, and an ambitious flight, towing the aircraft from Luzon to Tokyo in Japan, was planned.[7] This flight was intended to prove the suitability of large gliders to act as an "aerial freight train" for regular transport.[7]

The flight, conducted in late June 1946, took 11 hours of flight time and included an overnight stay on Okinawa; covering 1,800 miles (2,900 km), it concluded at Tachikawa Airfield near Tokyo.[7] Despite the success of the flight, the "aerial freight train" concept did not catch on; the aircraft had its engines re-fitted in August 1946 and was returned to service as a normal C-47.[7]