Military Wiki
Register
Don't have an account?
Sign In
Advertisement
in: Articles incorporating text from Wikipedia, Infantry regiments of the British Army, Military units and formations in Dorset,
and 7 more

The Dorset Regiment was a line infantry regiment of the British Army in existence from 1881 to 1958, being the county regiment of Dorset. Until 1951, it was formally called the Dorsetshire Regiment, although usually known as "The Dorsets". In 1958, after service in the Second Boer War along with World War I and World War II, the Dorset Regiment was amalgamated with the Devonshire Regiment to form the Devonshire and Dorset Regiment. In 2007, it was amalgamated with the Royal Gloucestershire, Berkshire and Wiltshire Regiment, The Light Infantry and the Royal Green Jackets to form a new large regiment, The Rifles.

The Dorsetshire Regiment was formed in 1881 under the Childers Reforms becoming:[1]

The 1st Battalion took part in operations in the Tirah Campaign on the North West Frontier of British India in 1897–98, and the 2nd Battalion fought in the Second Boer War, participating in the Relief of Ladysmith.[2]

In 1908, the Volunteers and Militia were reorganised nationally, with the former becoming the Territorial Force and the latter the Special Reserve;[3] the regiment now had one Reserve battalion and one Territorial battalion, becoming:[4][5]

The 2nd Battalion was in Poona, India, when war broke out and was shipped, as part of the 16th Indian Brigade, to Mesopotamia, where it was trapped in the Siege of Kut and captured by the Turks. (Of the 350 men of the battalion captured, only 70 survived their captivity.) During the siege, returning sick and wounded, and the few replacements who had been sent out, were unable to re-join their battalion, so they, and similar drafts of the 2nd Norfolk Regiment, were amalgamated into a scratch battalion forming part of the force attempting to relieve Kut.[7] This battalion was formally titled the Composite English Battalion, but was more commonly known as The Norsets; it was broken up in July 1916, when the 2nd Dorsets was re-constituted.[6] The battalion then served in Egypt as part of 9th Indian Brigade in the 3rd Indian Division.[6]

The 3/4th Reserve Battalion was moved to Ebrington Barracks in Derry in April 1918.[8] In April 1920, during the Anglo-Irish War, soldiers from the regiment fired into a protesting crowd on Bridge Street, leading to riots and skirmishes which saw it fight alongside the Royal Irish Constabulary (RIC) and (later) Ulster Volunteers (UVF) against the Irish Republican Army (IRA).[9][10] Sporadic violence in the city continued until another large engagement in June, when the Dorsets and the UVF attacked the Bogside area of the city. A large IRA counter-offensive from the west ended the disturbances, which had seen 40 people killed since April.[11][12] Some RIC officers threatened to resign over the Dorsets' fraternisation and co-operation with the UVF.[12]

In Summer 1921, the 2nd Battalion served under the command of Major-General John Burnett-Stuart, General Officer Commanding Madras District in India,[13] where he was involved in the suppression of the Moplah Rebellion at Malabar between 1921 and 1922. The riots that they quashed were inspired by 10,000 guerrillas and led to 2,300 executions.[14]

The Officers and Men from the Dorset Regiment who lost their lives while taking part in the suppression of the revolt are commemorated in a brass tablet at the St. Mark's Cathedral, Bangalore.[15]

In the Second World War, the regiment expanded to eight battalions.[5]

The 1st Battalion was a regular army unit and part of the 231st Infantry Brigade, alongside the 1st Hampshires and 2nd Devonshires, for the duration of the war, fighting in Malta between 1940 and 1942, Sicily in August 1943, and Italy in September 1943. The 1st Dorsets landed on Gold Beach on D-Day in June 1944 as a part of the 50th (Northumbrian) Infantry Division and fought with the division in the Battle of Normandy and North-West Europe, until the division was withdrawn in late 1944 and used as a training division. The battalion had troops 327 killed and 1,029 wounded.[16]

The 2nd Battalion was also a regular army unit and was part of the 5th Infantry Brigade, 2nd Infantry Division, throughout the war, participating in the Battle of France and the Dunkirk evacuation in 1940. In 1944, it took part in the Battle of Kohima during the Burma Campaign of 1944–1945, still with the 2nd Division.[17]

The 4th Battalion was an original 1st Line Territorial Army unit and, in 1939, raised a 2nd Line duplicate, the 5th Battalion, when the Territorial Army was doubled in size prior to the commencement of the war. The 4th and 5th Battalions were both part of 130th Infantry Brigade in the 43rd (Wessex) Infantry Division, participating in the Normandy Campaign, Operation Market Garden and the Rhine Crossing.[18]

The 30th Battalion, previously the 6th (Home Defence) Battalion, was with the 43rd Infantry Brigade in North Africa and the invasion of Sicily, after which it spent the rest of the war in Gibraltar.[19]

The 7th Battalion, which was raised in 1940, was later converted to the 110th Light Anti-Aircraft Regiment, Royal Artillery. The regiment served with the 43rd (Wessex) Division in North-West Europe from June 1944 to May 1945.[20]

The 8th Battalion, which was also raised in 1940, was initially assigned to the 210th Independent Infantry Brigade (Home) and was on home defence. Later, the battalion converted to the 105th Light Anti-Aircraft Regiment, Royal Artillery. The regiment was sent to North Africa in late 1942 and fought with the British First Army, It later served in the Italian Campaign with the British Eighth Army.[20]

The regiment was awarded the following battle honours. Those from the two World Wars that are emblazoned on the Queen's Colour are indicated in bold:[22]

The following member of the regiment was awarded the Victoria Cross:

Colonels of the regiment were:[5]

Lieutenant Vizard, an officer serving with 4th battalion in the First World War 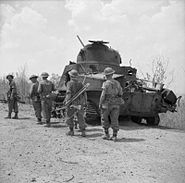 Men of the 2nd Dorsetshires passing a knocked out Lee tank at Mount Popa, April 1945 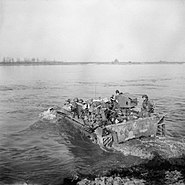 Soldiers of 5th Battalion during the Rhine crossing, March 1945