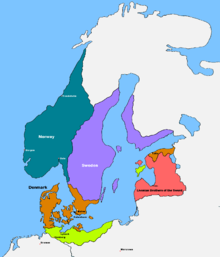 The establishment of a dominium maris baltici ("Baltic Sea dominion") was one of the primary political aims of the Danish and Swedish kingdoms in the late medieval and early modern eras.[1][2] In the struggle for the dominium maris baltici (Northern Wars), the Danish and Swedish navies played a secondary role, as the dominium was to be won through control of key coasts by land warfare.[3]

The term, which is commonly used in historiography, was probably coined in 1563 by the king and grand duke of the Polish-Lithuanian union, Sigismund II Augustus, referring to the hegemonial ambitions of his adversaries in the Livonian War.[4] The first written reference stems from the Dutch-Swedish treaty of 5 (O.S.) / 15 (N.S.) April 1614, concluded in The Hague.[4][nb 1]

Wars over the Baltic

The Baltic sea was vital for many European powers.[5] It was a source for important materials, and a growing market for many commodities.[5] The importance of the region was such that it was of interest even to powers that did not have direct access to it, such as Austria and France.[5] For several centuries, Sweden and Denmark would attempt to gain the total control of the sea, a policy that was opposed by other local and international powers.[2][5] The control of the Baltic has been described as one of the main goals of the Denmark's and Sweden's policies.[6][7][8][9]

The conflict over the Baltic was heavily shaped by the expansionist policy of the Scandinavian (Nordic) powers, who sensed opportunity in the power vacuum created by the weak or non-existent naval power of the Holy Roman Empire and Poland-Lithuania.[2][10] Denmark and Sweden used their control of parts of the Baltic to fuel their militaries.[2] Both claimed the Baltic as theirs, and promised to protect foreign shipping.[2] While the Nordic powers vied with one another over control, they both agreed that it should be the domain of one of them, not an "outsider", like Poland or Russia.[4] The Scandinavian powers tried to prevent the rise of the opposition through diplomatic treaties, in which other powers like Russia or Germany were forbidden to create their navies, and through military actions, whether targeting opponent naval forces, or through taking control of the Baltic ports.[4] In one of the most notable actions to retain its monopoly over the Baltic, Denmark destroyed, without declaration of war, the nascent Polish-Lithuanian Commonwealth Navy in 1637.[4]

The numerous wars fought for the dominium maris baltici are often collectively referred to as Northern Wars.[11] Early on, Denmark had the upper hand, but eventually, it lost to Sweden.[12] Neither Denmark nor Sweden managed to realize thorough military and economic control of the Baltic, though Sweden during her time as an empire came closest to that aim before the Great Northern War.[5]

In historiography, the term dominium maris baltici is used either in a narrower sense as a new Swedish concept of the Early Modern era, closely tied to the Swedish Empire,[13] or in a wider sense including the preceding Danish hegemony in the southern Baltic Sea.[14]

Dernmark had subdued the southern Baltic coast in the 12th century, but lost control in the 13th century after her defeat in the Battle of Bornhöved (1227), with the exception of the principality of Rügen. Thereafter, the Hanseatic League became the dominant economic power in the Baltic Sea.[14] Valdemar IV "Atterdag" of Denmark is credited by Robert Bohn as the first Danish king pursuing a policy of establishing a Danish dominium maris baltici, aiming at adding to Denmark's naval dominance an economical hegemony at the expense of the Hanseatic League.[14] To achieve this aim, Valdemar sold Danish Estonia to the Teutonic Order state in 1346, consolidating his finances and raising an army from the revenue.[14] After initial territorial gains, Valdemar conquered the Hanseatic town of Visby (Gotland), resulting in a war decided by the League in the peace of Stralsund in 1370, which marked the climax of Hanseatic power.[15]

Atterdag's daughter and de facto successor, Lady Margaret, managed to concentrate the crowns of Denmark, Norway and Sweden in her Copenhagen-centered Kalmar Union.[16] In 1429, Kalmar king Eric of Pomerania started to raise the Sound Dues from merchants entering or leaving the Baltic Sea, allowing the Copenhagen court to benefit from the Baltic Sea trade profits without engaging in economic adventures itself.[17] The Sound Dues, imposed until 1857 and constituting a primary source of income for the Royal treasury, quickly became a contentious issue which brought Denmark in conflict with the Hanseatic League and the neighboring powers.[18]

After the break-up of the Kalmar Union, the Kingdom of Sweden became Denmark-Norway's primary rival for hegemony in the Baltic Sea. Christian IV of Denmark's victory in the Kalmar War in 1613 marked the last instance of a successful defense of the dominium maris baltici against Sweden, while the subsequent wars ended in favor of the latter.[19] The period of Danish intervention in the Thirty Years' War (Kejserkrig) is also considered part of the wars for the dominium maris baltici[20]—in this war, however, the opponent was not the Swedish king, but the ambitious Holy Roman Emperor Ferdinand II, who temporarily planned to establish the empire as a naval power in the Baltic. He assigned this task to Albrecht von Wallenstein, leading to a concerted action of Denmark and Sweden in the defense of Stralsund. The Danish defeat in the battle of Wolgast and the subsequent treaty of Lübeck in 1629 however removed Denmark from the battlefield.[21]

After Sweden had become independent from the Kalmar union, she became Denmark's major rival for the dominium maris baltici. The first war ascribed to this conflict is the Northern Seven Years' War (1563–1570, associated with the Livonian War), between 1611 and 1613 followed the above mentioned Kalmar War.[20] Major Swedish successes followed the capture of Riga in 1621[22] and the Swedish landing in Pomerania in 1630.[21] The gains in the Torstenson War,[20] a theater of the Thirty Years' War, humiliated Denmark, and the subsequent Peace of Westphalia confirmed Sweden's status as a European great power (stormaktstiden). Swedish control of the Baltic was not thorough, however, since the Maritime Powers, especially Dutch Republic, continued to be economically and militarily present and pursued their balance of power policy also in respect to Denmark and Sweden. The Second Northern War,[20] the Scanian War[20] and the first stage of the Great Northern War[20] left Sweden's dominium maris baltici intact, yet it was finally ended by the Treaty of Nystad in 1721. Sweden had sought to secure her dominium maris baltici by turning many towns (e.g. Riga, Narva, Wismar) into fortresses, often under the aegis of Erik Dahlberg.[23] Since the Thirty Years' War, Sweden collected customs (Licenten) from merchant vessels on the Baltic Sea, in Swedish as well as in non-Swedish ports.[24] These customs were calculated as a certain percentage of the value of transported goods, and once payment took place in any port, the respective receipt was valid for the whole dominium maris baltici.[25]

The failure of the Scandinavian powers to take control of the Baltic, and steadfast refusal of other powers – local and international – to recognize their claims, is seen as one of the factors that led to the development of the "freedom of the seas" principle in the international law.[5]