The Dassault-Breguet Super Étendard (Étendard is French for "battle flag") is a French carrier-borne strike fighter aircraft designed by Dassault-Breguet for service with the French Navy. The aircraft is an advanced development of the Étendard IVM. The Super Étendard first flew in October 1974 and entered French service in June 1978. French Super Étendards have served in several conflicts such as the Kosovo War, the War in Afghanistan and the military intervention in Libya.

The Super Étendard is a development of the earlier Étendard IVM that was originally to have been replaced by a navalised version of the SEPECAT Jaguar (the Jaguar M), until this plan was stalled by political problems, together with problems with operating the Jaguar aboard ships, including handling problems when flying on a single engine and poor throttle response that made landing back on a carrier after an engine failure difficult.[2] The Jaguar M was formally cancelled by the French government in 1973.[3]

Proposed replacement aircraft for the Jaguar M included the LTV A-7 Corsair II and the Douglas A-4 Skyhawk, and Dassault had its own proposal to meet the requirement - the Super Étendard.[4] The Super Étendard was essentially an improved version of the existing Étendard IVM, outfitted with a more powerful engine, a new wing and improved avionics. Dassault's proposal was accepted by the French Navy in 1973, the Super Étendard.[5]

The first of three prototypes, an IVM modified with the new engine and some of the new avionics,[5] made its maiden flight on 28 October 1974.[6][7] Original intentions were for 100 Super Étendard aircraft to be ordered for the French Navy, however the order placed was for 60 of the new model with options for a further 20; further budget cuts lead to only 71 Super Étendards being purchased in the end, with deliveries starting in June 1978.[6][8]

In the first year of production, 15 Super Étendards were produced for the French Navy, allowing the formation of the first squadron in 1979. Dassault produced the aircraft at a rough rate of two per month.[9] The Argentinian Navy placed an order for 14 aircraft to meet their requirements for a capable new fighter that could operate from their sole aircraft carrier.[6] All manufacturing activity was completed in 1983.[10]

The Super Étendard is a small, single-engined, mid-winged aircraft with an all-metal structure. Both the wings and tailplane are swept, with the folding wings having a sweepback of about 45 degrees, while the aircraft is powered by a non-afterburning SNECMA Atar 9K-50 turbojet with a rating of 49 kN (11,025 lbf). The main new weapon of the Super Étendard was the French anti-shipping missile, the Aérospatiale AM 39 Exocet.[5] It featured a Thomson-CSF Agave radar which, amongst other functions, was essential to launch the Exocet missile.[5] One of the major technical advances of the Super Étendard was its onboard UAT-40 central computer; this managed most mission-critical systems, integrating navigational data and functions, radar information and display, and weapons targeting and controls.[11]

In the 1990s, significant modifications and upgrades were made to the type, including an updated UAT-90 computer and a new Thomson-CSF Anemone radar; which provided nearly double the range of the previous Agave radar.[12] Other upgrades at this time included an extensively redesigned cockpit with HOTAS controls, and airframe life extension work was undertaken; a total of 48 aircraft received these upgrades, at a rate of 15 per year.[12] During the 2000s, further improvements included significantly improved self-defence ECM capability to better evade enemy detection and attacks,[13] cockpit compatibility with night vision goggles, a new inertial data system partly integrating GPS, and compatibility with the Damocles Laser designator pod.[12]

The Super Étendard could also deploy tactical nuclear weapons;[14] initially these were unguided gravity bombs only, however, during the 1990s the Super Étendard was extensively upgraded, enabling the deployment of the Air-Sol Moyenne Portée, a ramjet-powered air-launched nuclear missile.[5] The aircraft was also refitted with the ability to operate a range of laser-guided bombs and, to enable the type to replace the retiring Étendard IV in the reconnaissance mission, the Super Étendard was fitted to carry a specialist reconnaissance pod as well.[13] However, the aircraft is unable to perform naval landings without jettisoning unexpended ordnance.[12]

The Argentine Naval Aviation decided to buy 14 Super Étendards in 1980, after the United States put an arms embargo in place—due to the Dirty War—and refused to supply spare parts for their A-4Q Skyhawks. Between August and November 1981, five Super Étendards and five Exocets were shipped to Argentina.[15] The Super Étendards, armed with Exocet anti-ship missiles, would play a key role in the Falklands War between Argentina and the United Kingdom in 1982. The squadron was stationed at an air base on the Rio Grande; during the conflict, the threat posed to British naval forces led to the planning of Operation Mikado and other proposed infiltration missions to raid the air base, aiming to destroy the Super Étendards to prevent their use.[16][17]

A first attempt to attack the British fleet was made on 2 May 1982, but this was abandoned due to flight-refuelling problems.[18] On 4 May, two Super Étendards, guided by a Lockheed P-2 Neptune, launched one Exocet each at the British destroyer HMS Sheffield, with a single missile fatally striking Sheffield.[18][19] On 25 May, another attack by two Super Étendards resulted in two missiles hitting the merchant ship Atlantic Conveyor, which was carrying several helicopters and various other supplies to the front line.[19][20][21] The Exocets that struck the Atlantic Conveyor had been inadvertently redirected by decoy chaff deployed as a defensive measure by other ships;[22] both the Sheffield and the Atlantic Conveyor sank as a result of the Exocet strikes.[23]

The fifth missile was launched in an attack intended to strike against the British aircraft carrier HMS Invincible.

Following the end of the conflict, by 1984 Argentina had been able to complete the delivery of the full 14 Super Étendards ordered as well as a number of Exocets with which to arm them.[24] Super Étendards performed qualifications on aircraft carrier ARA 25 de Mayo until the ship's final retirement.[25] Since 1993, Argentinian pilots have practised on board the neighbouring Brazilian Navy's aircraft carrier São Paulo. Touch-and-go landing exercises were also common on US Navy carriers during Gringo-Gaucho manoeuvres and joint exercises.[26]

In 2009, an agreement was signed between Argentina and France to upgrade Argentina's remaining fleet of Super Étendards.[27] An earlier proposal to acquire former French Naval Super Étendards was rejected due to high levels of accumulated flight hours, instead equipment and hardware was removed from retiring French airframes and installed into Argentinian aircraft, effectively upgrading them to the Super Etendard Modernise (SEM) standard.[28] As of 2012, 11 Super Étendards remain in service with Argentina.[29]

Deliveries of the Super Étendard to the French Navy started in 1978, with the first squadron, Flottille 11F becoming operational in February 1979. In total, three operational squadrons and a training unit were equipped with the Super Étendard.[5] The Super Étendards would operate from both of France's aircraft carriers at that time, the Clemenceau and the Foch; either carrier's air wing typically comprised 16 Super Étendards, 10 F-8 Crusaders, 3 Étendard IVPs, 7 Breguet Alizé anti-submarine aircraft, as well as numerous helicopters.[30]

The first operational missions took place in Lebanon during Operation Olifant. On 22 September 1983, French Navy Super Étendards operating from the Foch bombed and destroyed Syrian forces positions after a few artillery rounds were fired at the French peace keepers.[31] On November 10, a Super Etendard escaped from being hit by a Syrian SA-7 MANPADS near Bourj el-Barajneh while flying over Druze positions.[32] On 17 November 1983, the same airplanes attacked and destroyed an Islamic Amal training camp in Baalbeck after a terrorist attack on French paratroopers in Beirut.[33]

From 1991, the original combat-orientated Étendard IVMs were withdrawn from French service;[34] though the reconnaissance version of the Étendard IV, the IVP remained in service until July 2000.[35] In response, the Super Étendards underwent a series of upgrades throughout the 1990s to add new capabilities and update existing systems for action in the modern battlefield. Designated Super Étendard Modernisé (SEM), the first combat missions for the type came during NATO's Allied Force operations over Serbia in 1999; it was reported that over 400 combat missions were flown with 73% of the assigned objectives destroyed  : the best performance of all the air forces involved in the missions over Serbia.[citation needed]

The SEM also flew strike missions in Operation Enduring Freedom. Mission Héraclès starting 21 November 2001 saw the deployment of the Charles de Gaulle and its Super Étendards in Afghanistan. Operation Anaconda, starting on 2 March 2002 saw extensive use of the Super Étendard in support of French and allied ground troops. Super Étendards returned to operations over Afghanistan in 2007 and 2008. One of their main roles was to carry laser designation pods to illuminate targets for Dassault Rafales.[36]

In March 2011, Étendards were deployed as a part of Task Force 473, during France's Opération Harmattan in support of UN resolution 1973 during the Libyan conflict.[37] They were paired again with Dassault Rafales on interdiction missions.[38] Today, all Super Étendards in French naval aviation are in one "flottille" (squadron) called flottille 17F All Super Étendards are expected to be retired from French service by 2016,[1] to be replaced from 2006 onwards with Dassault's Rafale M.[39]

A total of five Super Étendards were loaned to Iraq in 1983 while the country was waiting for deliveries of Agave-equipped Dassault Mirage F1s capable of launching Exocet missiles that had been ordered; the first of these aircraft arrived in Iraq on 8 October 1983.[40] The provision of Super Étendards to Iraq was politically controversial, the United States and Iraq's neighbour Iran were vocal in their opposition while Saudi Arabia supported the loan; the aircraft were seen as an influential factor in the 1980-1988 Iraq-Iran War as they could launch Exocet strikes on Iranian merchant shipping traversing the Persian Gulf.[41][42] The Super Étendards began maritime operations over Persian Gulf in March 1984; a total of 34 attacks were carried out on Iranian shipping through the rest of 1984.[43]

Iraq would typically deploy the Super Étendards in pairs, escorted by Mirage F1 fighters from bases in Southern Iraq; once inside the mission zone, the Super Étendards would search for targets using their onboard radar and engage suspected tankers at long range without visual identification.[44] While tankers would typically be struck by a launched Exocet, they were often only lightly damaged by a successful hit.[45] In April 1984, an Iraqi Super Étendard was claimed to have been shot down by an Iranian F-4 Phantom II over Khark Island.[46] Separately, on 26 July and 7 August 1984, claims of Super Étendard losses to Iranian Grumman F-14 Tomcats were reported.[47] Iran would cumulatively claim a total of three Super Étendards to have been shot down by Iranian interceptors, however France would state that four out of the five leased aircraft were returned to France in 1985.[47] 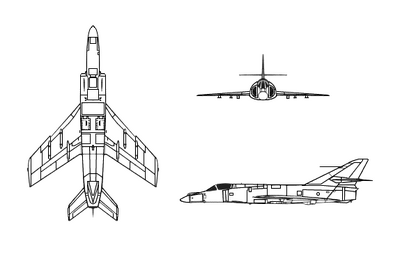