View source
This article is about the Russian military decoration. For the symbol itself, see St George's Cross. For the British decoration, see George Cross.

The Cross of St. George (Russian: Георгиевский Крест) is a state decoration of the Russian Federation. It was initially established by Imperial Russia where it was officially known as the Decoration of the Military Order of St. George between 1807 and 1913.[citation needed] The Cross of St George was reinstated into the Russian awards system in 1992.

Established in the February 1807 decree of Emperor Alexander I, it was intended as a reward for "undaunted courage" by the lower ranks (soldiers, sailors and NCOs) of the military.[1] Article 4 of the decree ordered the decoration to hang from the same ribbon as the Order of Saint George. There was only a single class with no restriction as to the number of awards per person.

The first soldier to be awarded the Cross of St. George was a cavalry non-commissioned officer named Yegor Ivanovich Mitrokhin. He received the award for distinction in the battle against the French at Friedland on June 2, 1807.

Numbering of the crosses on the reverse began in January 1809, conversely, a register of the awards was also started that same year. By this time, approximately 10,000 crosses had already been awarded. By the beginning of the War of 1812, 16,833 crosses had been produced by the Mint. Statistics of awards over the first years is detailed below:

An 1856 royal decree divided the decoration into four classes. A person initially received the fourth class and would subsequently be promoted to higher classes for further acts of bravery; one who received all four classes was called a "Full Cavalier of St. George". The first and second classes were made of gold, the third and fourth were made of silver. The numbering on the reverse began anew for each class of the decoration.[2] A 1913 royal decree officialized the name "Cross of St George" and the numbering began anew. In 1915, due to war shortages, the first and second class decorations were made of lower grade gold (60% gold, 39.5% silver,0.5% copper). The third and fourth class decorations were produced in the same 99% silver. 26,950 first class crosses (№ 5531 to № 32,840) and 52,900 second class crosses (№ 65,030 to № 12,131) were produced in low grade gold.[3]

"1M" was used in the serial number to indicate the number 1 million. On September 10, 1916, the Highest Council of Ministers approved a change to the St George Cross removing the gold and silver from its making. They began to mint crosses made of "yellow metal" (JM) and of "white metal" (BM). The crosses first and second class, made of yellow metal had the letters "JM" (Russian «ЖМ») above the serial number, the crosses 2nd and 3rd class, made of white metal had the letters "BM" (Russian «БМ») above the serial number. The number of crosses produced for each class in "JM" and "BM":

In 1917, the Provisional Government changed the statute of the cross allowing its award to junior officers. When awarded as such, a silver laurel branch device was affixed to the ribbon. The Cross of St. George was abolished after the Russian Revolution of 1917, the Order of Glory nominally replaced it during the Soviet Era.

The Cross of St George is awarded to soldiers, sailors, sergeants, petty officers, warrant officers and junior officers for deeds and distinction in battle in defence of the Fatherland, as well as for deeds and distinction in battle on the territory of other states while maintaining or restoring international peace and security with recognized instances of courage, dedication and military skill. Awarded sequentially in four classes from the fourth to the first for subsequent acts of courage.

The first post reinstatement award ceremony took place in August 2008 to soldiers who displayed courage and heroism during the armed conflict in South Ossetia. On that day, Russian President Dmitry Medvedev decorated 11 soldiers and sergeants with the Cross of St George fourth class for courage and heroism displayed in the performance of military duties.[7] A further 263 servicemen were decorated with the Cross of St George for distinction displayed in the peacekeeping operation to force Georgia to peace.[8]

When the cross is not worn, a ribbon bar is worn on the uniform. The ribbon bar is 8mm high by 24mm wide, it bears a 7mm high golden metallic roman numeral denoting the class of the award. 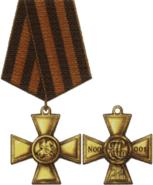 Ribbon bar for the Cross of St. George 1st class

Ribbon bar for the Cross of St. George 2nd class

Ribbon bar for the Cross of St. George 3rd class

Ribbon bar for the Cross of St. George 4th class