A continuous-rod warhead is a specialized munition that exhibits an annular blast fragmentation pattern, so that when it explodes it spreads into a large circle that cuts the target. It is used in anti-aircraft and anti-missile missiles.

Rifle and machine-gun bullets were used against early military aircraft during World War I. Artillery was used when aircraft flew above the range of rifle and machine-gun cartridges. Since the probability of actually striking the aircraft was small, artillery shells were designed to explode at the approximate altitude of the aircraft to throw a shower of fragments in the vicinity of the explosion. Similar anti-aircraft weaponry with larger calibers, higher rates of fire, and improved fuzes continued to be used through World War II. These bullets and small fragments often made small holes in the airframe. Unless the bullet struck the pilot, the engine fuel or cooling system, or a wire or hydraulic line actuating control surfaces, the aircraft remained operational.

Some anti-aircraft artillery projectiles were designed to fragment into long, thin pieces in an attempt to inflict damage on the airframe. Holes made by such fragments were more likely to cause destructive disruption of airflow around high-speed aircraft, but the hit probability was lowered for the smaller number of fragments from a warhead of equal size. The problem became more significant as anti-aircraft missiles were developed to replace guns after WWII. A smaller number of missiles would require an improved warhead to match the aircraft destruction probability of the larger number of artillery projectiles potentially carried by a weapon platform of the same size and cost. Some early AA missiles used nuclear weapons to increase probability of aircraft destruction. The concept of a folded continuous rod warhead was suggested in 1952.[1] 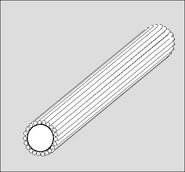 When detonated, the high explosive imparts momentum to the rods, thrusting them outward in an expanding circle. The rods are sufficiently soft (ductile) to allow the expansion without breaking the rods or the welded joints, and the detonation velocity is limited to under 1,150 m/s,[2] allowing the rods to bend at these locations instead. At some intermediate point the ring will have a zig-zag (alternating direction) appearance within a cylindrical envelope. Upon ultimate expansion the ring is circular and contained within a plane. The ring will then break and ultimately tend to form one or more straight rods. Since the net momentum of the rod relative to the missile is roughly zero its effectiveness will rapidly diminish as the broken ring expands.[3]

This rapidly expanding ring, when hitting the aircraft, can be more effective than an equivalent fragmentation warhead: the ring's effectiveness decreases as 1/R, rather than 1/R^2 for fragments.[2] Portions of the aircraft intercepted by the expanding ring will receive a continuous cut through the skin, light structure, underlying cables, hydraulic lines, and other plumbing if present. This may cause a structural failure, or, if not, can be sufficient for defeating the redundancy of aircraft systems. The effect is only pronounced as long as the ring is unbroken, so multiple layers of rods are employed in practical weapons to increase the effective radius.