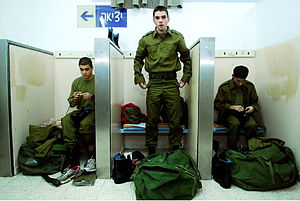 Conscription exists in Israel for all Israeli citizens over the age of 18, although non-Druze Arab citizens of Israel are exempt; other exceptions are made on religious, physical or psychological grounds (see Profile 21). The normal length of compulsory service is currently three years for men and two years for women.

Despite a general impression that the majority of Israeli citizens are conscripted, only about 50% of potential conscripts actually serve in the military. Others do not serve for a variety of reasons, including religious study, minority community exemptions, refusal to serve, "low motivation", and a criminal record.[citation needed]

In 1949, after the founding of the State of Israel, the Defense Service Law gave the IDF the authority to enlist any citizen. Draftees would then be required to show up for the draft in accordance with the military's decision to enlist them. Under this law, the period of service for men was 30 months and for women 18 months (although in accordance with a temporary order from January 10, 1968, six additional months were added to the mandatory service.) The draft requirement applies to any citizen or permanent resident who has reached the age of 18, and in accordance with the law, the individuals who are exempt from the draft are dismissed for various reasons, such as incapability, medical problems, military personnel needs, etc. Many of the soldiers who complete their mandatory military service are later obligated to serve in a reserve unit in accordance with the military's needs.

Economic restraints on the IDF have caused them to reconsider their force structure. As an increase in news coverage of the IDF, Israelis have widely become aware of their deficiencies. As a result of these two main factors and the inclusion of policy modifications, the IDF have slowly shifted towards a more modern military. Their shift towards a professional militia force has caused them to adapt more career-oriented attributes, thus becoming more selective then they have been in prior years. Instead of focusing on “role expansion,” Israel, most specifically its government, is focusing on “nation building.” [1]

The IDF determines a medical profile for each soldier, and according to that profile, the army decides where to assign the draftees to. Draftees with low profiles (Profile 21) and draftees diagnosed as not suitable for military service are exempt. The highest profile is 97.

Although the conscription is officially compulsory, in practice a significant percentage of the population does not enlist for various reasons. Among other things, recent decades have seen a growing phenomenon of draft dodging from military service, mainly due to conscience or political reasons (See Refusal to serve in the Israeli military). Exemptions have come under attack on grounds of fairness, and also because of a perceived shortage of combat personnel.[2]

Yeshiva students who declare that "Torah study is their artistry" (Torato Omanuto) (תורתו אומנותו) can delay their conscription as long as they continue their studies, under the so-called Tal Law. In practice, many of them end up never serving at all. This is a very controversial issue in Israel and key to religious relations in Israel. Several attempts were made to change the practice, notably the establishment of the Tal committee in 1999, which led to the Tal Law, implemented in 2002. Yet the Torato Omanuto exemption continued largely unchanged. The Tal Law was later ruled unconstitutional in its current form, and a replacement is needed before August 2012.[3] Most beneficiaries of this exemption are Haredi Jews. Members of the Religious Zionist sector often serve within a separate system called Hesder which combines advanced Talmudic studies with military service in the Israel Defense Forces. The IDF also tends to make the military service easier for recruits at an older age and recruits with families, as well as athletes and musicians of note.

From time to time a public debate emerges in Israel around the issue of exemption from military service in Israel.[4]

A basic law of Israel is the Defense Service Law. It lists the guidelines and regulations of mandated military service in Israel. Some regulation includes age, duties, service requirements, time of service, etc. Chapter 5: Reserve Service: Going Abroad covers the rules and requirements for going on becoming a temporary reserve and going abroad. (a) A person designated for defense service and a person of military age who belongs to the regular forces of the Israel Defense Forces shall not go abroad unless granted a permit from the Minister of Defense. (b) A person of military age the continuance of whose regular service has been deferred for any reason shall not go abroad during the period of deferment save under a permit from the Minister of Defense. (c) A permit under this section may be unconditional or subject to conditions, including a condition relating to the holder's stay abroad. (e) Where any of the conditions of the permit is not fulfilled, the Minister of Defense may revoke the permit and may direct him, by order, to return to Israel within the time prescribed in the order. (f) The Minister of Defense shall not exercise his power under subsection (e) before he has given the holder of the permit an opportunity to state his case to him.[5]

The IDF had strict restraints on letting individuals go into the reserves, even if just temporarily because of their high risk of attack from neighboring states. Through the dissolution of partnerships and peace treaties in recent years, that threat has reduced considerably.[6] Consequently, the high demand for IDF soldiers has slightly decreased as well.

The military draft process occurs in the following steps: The Army calls upon a potential soldier in a letter and this is called the "First Calling" or Tzav Rishon. This letter states that the teenager must report to a certain place at a certain time for a day-long examination and interviewing. After careful looking over of the Tzav Rishon's results the army will call the people to enlist when they turn a certain age to begin the army process and basic training.

There are various routes which allow the draftees to postpone the date of recruitment. An automatic postponement is granted for student to graduate from high school. Additional routes which lead to the postponing of the recruitment:

When there is a surplus of recruits, the military often raises the threshold required of recruits, and grants an exemption due to incompatibility to a much larger number of recruits. In addition, there is a widespread phenomenon of granting exemption from military service because of incompatibility to female candidates who were identified as having a low medical profile and/or low motivation to serve. In such cases the reason for the exemption would usually be stated as: "Excess of female recruits."[citation needed]

There is an alternative voluntary civilian national service in Israel for those that cannot or do not wish to serve in the Israel Defense Forces. Most participants are Jewish women from the Religious Zionist sector.[citation needed]