Comfort is a census-designated place (CDP) in Kendall County, Texas, United States. As of July 1, 2017, the population of Comfort is 3,189.[3] It is part of the San Antonio Metropolitan Statistical Area. Comfort is east of the larger city of Kerrville.

Comfort was established in 1854 by German immigrants, who were Freethinkers and abolitionists.[5] Ernst Hermann Altgelt, at the age of twenty-two, is credited with surveying and measuring the lots that would later be sold to the incoming German immigrants.[6] He stayed and married Emma (Murck) Altgelt, and they raised their nine children in the township of Comfort. Fritz and Betty Holekamp built the first house in Comfort having started construction before Comfort's official founding on September 3, 1854.[7] The first churches were not established in Comfort until 1900.[8] After some controversy, a cenotaph honoring "the Founding Freethinkers" was dedicated on November 2, 2002.[9]

The downtown area is possibly one of the most well-preserved historic business districts in Texas. There are well over 100 structures in the area dating back to the 19th century, and seven of them were designed by the noted architect Alfred Giles.[10] Mr. Giles lived in San Antonio, and he would ride horses, the stagecoach, and later the train to check his building sites in Comfort.[11] Most of the population today is composed of descendants of those original pioneer families of the 1850s and the 1860s.[12]

Comfort is also known for a tragic event that took place during the American Civil War. The Treue der Union Monument ("Loyalty to the Union") was dedicated in honor of thirty-five men who died at the Battle of the Nueces, which took place because they opposed the state's secession from the Union. The German settlers were killed on their way to Mexico during the Civil War. They were attacked by Confederate forces near Brackettville on August 10, 1862. The bodies were not buried and the bones were retrieved and placed here in 1865. The monument was erected in 1866.[13][14]

In 1918, Albert Steves erected a Hygieostatic Bat Roost on his family farm in Comfort. This roost was built to attract bats in an effort to control mosquito populations by natural means. It was originally researched and developed by Dr. Charles Agustus Rosenheimer Campbell of San Antonio. The idea was to use bats against malaria carrying mosquitos. At one time, there were sixteen bat roosts built in the United States and Europe, of which only two sites now remain — one in Comfort and one in the Florida Keys.[15] [16]

Some of the early settlers in Comfort migrated from the collapsed Fisher-Miller Land Grant experimental colonies of the Darmstadt Society of Forty.

For more details on this topic, see List of Darmstadt Society of Forty.

The climate in this area is characterized by hot, humid summers and generally mild to cool winters. According to the Köppen Climate Classification system, Comfort has a humid subtropical climate, abbreviated "Cfa" on climate maps.[17]

There were 799 households out of which 38.0% had children under the age of 18 living with them, 59.7% were married couples living together, 11.5% had a female householder with no husband present, and 24.5% were non-families. 20.5% of all households were made up of individuals and 9.3% had someone living alone who was 65 years of age or older. The average household size was 2.82 and the average family size was 3.26.

Comfort is served by the Comfort Independent School District. 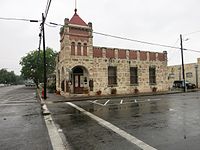 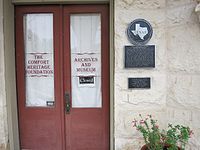 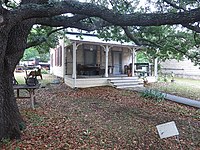 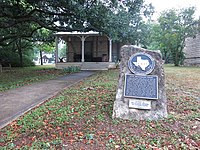 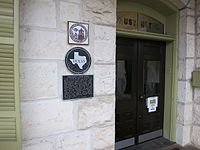 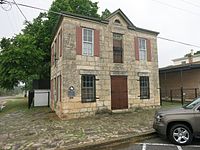 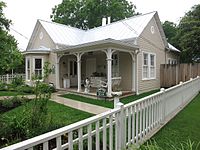 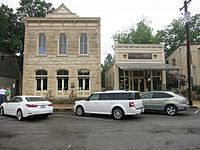 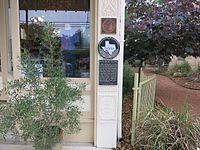 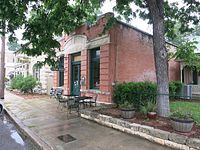 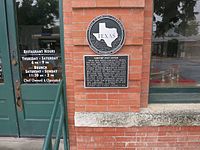