Colonel /ˈkɜrnəl/, abbreviated Col, is a military rank of a senior commissioned officer. It or a corresponding rank exists in most armies, marine forces and in many air forces; the naval equivalent rank is generally captain. In air forces with a separate rank structure, the equivalent rank is generally group captain. It is also used in some police forces and other paramilitary rank structures. A colonel was typically in charge of a regiment in an army, especially in Great Britain; but typically as of 2012 a colonel is the commander of a brigade or regiment in the U.S. Army or Marine Corps, and of a group or wing in the US Air Force.

'Colonel' is usually the highest or second-highest field rank, and is below the general ranks. In some militaries, no 'general' ranks exist and colonel is the highest-ranking military officer.

With the shift from primarily mercenary to primarily national armies in the course of the seventeenth century, a colonel (normally a member of the aristocracy) became a holder (German Inhaber) or proprietor of a military contract with a sovereign. The colonel purchased the regimental contract — the right to hold the regiment — from the previous holder of that right or directly from the sovereign when a new regiment was formed or an incumbent was killed.[citation needed]

The rank of colonel was popularized by the Spanish tercios in the 16th and 17th centuries. Gonzalo Fernández de Córdoba, nicknamed 'the Great Captain', divided his armies in 'coronelías' or colonelcies, each led by a 'coronel' or colonel.[1] The modern English pronunciation of the word is due to the first variant.[2] The use of 'colonel' became more widespread as the tercios led by commanders of many nationalities fought all over Europe.

As the office of colonel became an established practice, the colonel became the senior captain in a group of companies which were all sworn to observe his personal authority — to be ruled or regimented by him. This regiment, or governance, was to some extent embodied in a contract and set of written rules, also referred to as the colonel's regiment or standing regulation(s). By extension, the group of companies subject to a colonel's regiment (in the foregoing sense) came to be referred to as his regiment (in the modern sense) as well.

In French usage of this period the senior colonel in the army or, in a field force, the senior military contractor, was the colonel general and, in the absence of the sovereign or his designate, the colonel general might serve as the commander of a force. The position, however, was primarily contractual and it became progressively more of a functionless sinecure. (The head of a single regiment or demi brigade would be called a 'mestre de camp' or, after the Revolution, a 'chef de brigade'.)

By the late 19th century, colonel was a professional military rank though still held typically by an officer in command of a regiment or equivalent unit. Along with other ranks it has become progressively more a matter of ranked duties, qualifications and experience and of corresponding titles and pay scale than of functional office in a particular organization.

As European military influence expanded throughout the world, the rank of colonel became adopted by nearly every nation under a variety of names.

With the rise of communism, some of the large communist militaries saw fit to expand the colonel rank into several grades, resulting in the unique senior colonel rank which was found and is still used in such nations as China and North Korea.

In many modern armies the 'regiment' has more importance as a ceremonial unit or a focus of members' loyalty than as an actual battle formation. Troops tend to be deployed in 'battalions' (commanded by a lieutenant colonel) as a more convenient size of military unit and, as such, colonels have tended to have a higher profile in specialist and command roles than as actual commanders of regiments. However, in Commonwealth armies the position of the colonel as the figurehead of a regiment is maintained in the honorary role of "colonel-in-chief", usually held by a member of the royal family,[3] the nobility, or a retired senior military officer. The colonel-in-chief wears a colonel's uniform and encourages the members of the regiment, but takes no active part in the actual command structure or in any operational duties.[4]

Colonel and equivalent ranks by country

The following articles deal with the rank of colonel as it is used in various national militaries.

Since the 16th century, the rank of regimental commander was adopted by several Central and Eastern European armies, most notably the forces of Polish-Lithuanian Commonwealth, Cossacks and then Muscovy. In countries with Slavic languages, the exact name of the rank maintains a variety of spellings, all descendant from the Old Slavonic word plk or polk meaning unit of standing army (see The Tale of Igor's Campaign), and include the following: 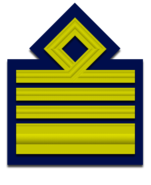 Some military forces have a colonel as their highest-ranking officer, with no 'general' ranks, and no superior authority (except, perhaps, the head of state as a titular commander-in-chief) other than the respective national government. Examples include the following (arranged alphabetically by country name):

Other uses of colonel ranks

The term colonel is also used as a title for auctioneers in the United States; there are a variety of theories or folk etymologies to explain the use of the term.[5] One of these is the claim that during the American Civil War goods seized by armies were sold at auction by the colonel of the division.[6]

Kentucky colonel is the highest title of honor bestowed by the Commonwealth of Kentucky. Commissions for Kentucky colonels are given by the Governor and the Secretary of State to individuals in recognition of noteworthy accomplishments and outstanding service to a community, state or the nation. The sitting governor of the Commonwealth of Kentucky bestows the honor of a colonel's Commission, by issuance of letters patent.